Drawing Board Brewing Company to open in Florence 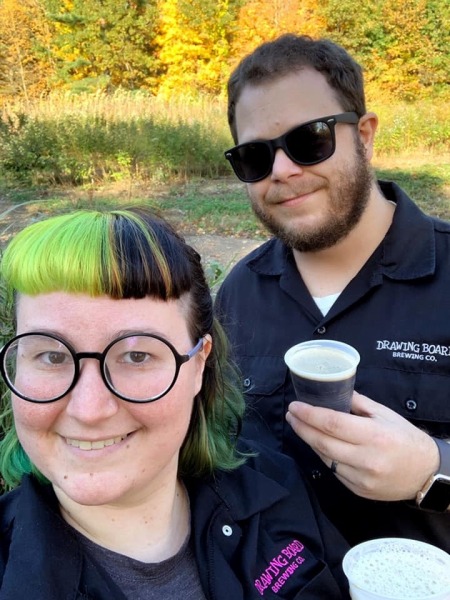 Tonka and Corey Lynch are the team behind Drawing Board Brewing Company.
Reminder Publishing submitted photo

FLORENCE – A recognizable brewery space is headed, well, back to the Drawing Board.

The husband and wife brewing team of Corey and Tonka Lynch are quickly progressing with plans to establish their new brewery, Drawing Board Brewing Co., at the former Brew Practitioners site on Main Street in Florence.

Corey told Reminder Publishing the two identified Florence as a landing spot due in large part to the community environment and potential for partnerships within the existing economy.

“We think Florence is a really cool community that has a lot of cool stuff going on,” he said. “There’s some very nice local businesses we’ve already come to know that we can foresee some future collaborations with.”

He added the timing of the former brewery’s move to Agawam earlier this year was perfect.

“Commercial space is incredibly limited right now,” Corey explained. “This space became available and there is enough space here to do what we want to do.”

Both seasoned homebrewers, Corey is the self-described “one with the boring science background” while Tonka, who “can hit any recipe out of the park,” has a flair for the artistic.

The Belchertown residents and University of Massachusetts Amherst alumni plan to start off as a production facility, brewing on a one-barrel system with a maximum of eight fermenters – “That’s over 100 barrels per year,” Corey noted – sometime in May with a soft opening at the end of the month.

“It gives us a lot of opportunity to do experimental runs with lower risk,” he said. “We’d also be able to brew specific beers for specific events. We’re already in talks with our CSA to brew a beer that will have ingredients from the farm and be available to our CSA members.”

Corey noted that once pandemic restrictions have ceased, he and Tonka plan to expand to include a taproom.

“In the beginning we will be focusing primarily on to-go sales with some limited package store availability,” he said. “But once the restrictions are lifted, we will be shifting to mostly taproom oriented, supplemented by to-go sales.”

A goal of Drawing Board Brewing Co., Corey explained, was to produce a variety of beers that everyone can enjoy.

“We pride ourselves on being able to brew the spectrum. We brew everything from the darkest, sweetest lagers to the crispest pilsners and literally everything in between,”?he said. “We do tend to specialize in the darker beers and the more of the dessert oriented beers and we know that a pretty decent focus will be experimenting with some more herbal-type beers and definitely some pilsners.”

Drawing Board has spent the past several months crowdsourcing through Mainvest in order to launch the venture with approximately 100 days remaining in the campaign as of press time. Those interested can invest as little at $100 and the company must pay it back plus a 4 percent return on the investment by January 2028.

Joking that circumstances are always “fluid” in the brewing community, Corey said preparing to open during a pandemic was not as daunting as one might think.

“Honestly, it’s been kind of helpful to us,” he said. “A lot of the breweries that have been in existence to this point have had to pivot to restrictions and it probably hit them significantly harder than it hit us.

“Being a new business opening in this world, we don’t have to pivot to those changes – we are going into it planning with them.”

Corey added because they understand initial sales will likely be low, the company will start off with himself and Tonka as the sole employees.

The pair also plans to offer the brewery as an open space for artists.

“We want this to be a place where they can show their work and sell their work,” he said. “We wouldn’t be taking any money for that. We just want to provide them the space. With [Tonka’s] artistic and crafting background, that is going to be a passion for the business.”