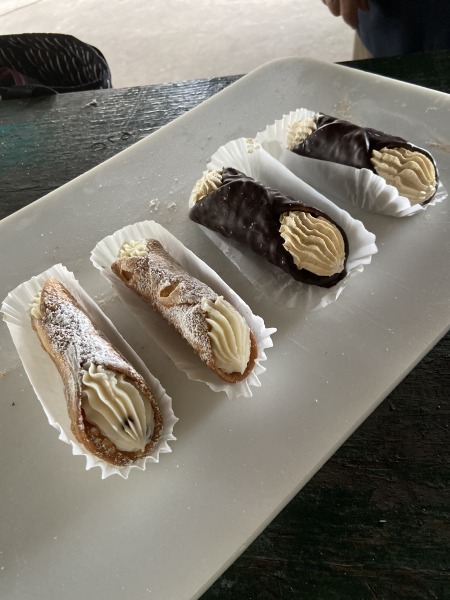 WESTERN MASS. – National Dessert Day took place on Oct. 14, and if you’ve gathered anything about the news staff over at Reminder Publishing, you know that we love to write features on local businesses and all of the delicious foods they have to offer.

For a few months now the news staff has been itching for the opportunity to eat cannoli and write about it. It all started when Managing Editor G. Michael Dobbs traveled to Russo Bakery in Enfield, CT. Mike sent our news team group chat a photo of an incredibly appetizing looking cannoli that he picked up from the location – which boasts over 30 flavors on their website. Instantly we asked each other, “When is National Cannoli?Day?”?hoping for the opportunity to exploit the holiday for our own desires to eat the delectable pastries for work.

Well – we missed it. National Cannoli Day took place on June 16. We were many weeks too late. However Staff Writer Dennis Hackett ingeniously asked, “But when is National Dessert Day?” Ding ding ding! We had a winner.

The traditional cannoli is a Sicilian pastry dish that consists of a fried tube–shaped shell that is filled with a sweet cream cheese filling. Some cannoli, however, are dressed up by being dipped in chocolate, or by being flavored with various items such as coconut, chocolate chips, mint, peanut butter and more.

According to bastapastamd.com, the traditional cannoli originated in the Sicilian city of Palermo. “It is believed that the cannoli’s filling originated with the Saracens, an ancient Arabic peoples, when they brought sugarcane to the region. Cannoli were once referred to by the Sicilians as Cappeli de Turchi, or Turkish hats. The pastry was made specifically for the Carnivale, a festive season before lent with parades and masquerades not unlike Mardi Gras. For festival goers, the cannoli became a symbol of fertility.”

If readers didn’t take the opportunity to indulge on National Dessert Day – fear not. We took our time eating through a few Western Mass. and northern Connecticut bakeries to taste the most delicious cannoli they had to offer.

With that said – we must offer the standard disclaimer: there are too many cannolis, and too little time. We were only able to make it out to a few local cannoli shops. If your favorite bakery wasn’t included in this feature story, we can assure you it wasn’t personal – we simply only have so many staff members who were able to comb through the area for these delicious treats.

La Fiorentina offered two types of cannoli: traditional and chocolate covered. The pastry shop is a staple in the community, having been around for decades and offers Italian pastries and desserts all year long.

While each member of the Reminder Publishing staff have different tastes and preferences, we all agreed that this was what you thought of when you pictured a standard, delicious cannoli. The crunchy shell was flaky with a classic cannoli filling. The filling was balanced and not overly sweet.

Managing Editor G. Michael Dobbs said he’s been eating the pastry shop’s dessert for years and they remain one of his favorites. “To some degree I’m a purist in that I prefer the traditional to the chocolate shell, but both I find are delicious. I’ve found the La Fiorentina cannoli are not too sweet and have a suitable amount of chocolate chips,” he said.

Russo’s is a haven for cannoli lovers, offering 18 of their 31 cannoli variations each day. We tried two variations: their classic cannoli and the raspberry mousse. The cannoli were beautiful, each cannoli had been piped with the filling giving it a textured appearance. We all noted that the shell was a bit softer than those of La Fiorentina, making it easier to cut and also not as crumbly, an advantage if you do not want to make a mess.

Staff writer Dennis Hackett said he felt the filling was less sweet than other fillings, but still rich. Staff writer Danielle Eaton agreed, and thought the filling has the most cream cheese forward taste, which was not a bad thing

The raspberry mousse, however, had mixed reviews. While we all agreed it was delicious and beautiful, as staff writer Sarah Heinonen noted, “almost too pretty to eat,” it was far from your standard cannoli. True to the name, the cannoli filling had a light, mousse texture. The cannoli itself was sweet, and we all agreed that raspberry lovers would really enjoy the cannoli.

Heinonen noted that the chocolate coating, while delicious, “resulted in a loss of the typical cannoli texture.” One thing we all agreed on was that this was no traditional cannoli. Eaton thought the flavor of the cannoli tasted more like a jelly donut than what one would expect from a cannoli, but a delicious jelly donut worth the indulgence.

Frigo’s is another establishment that has been around for decades. Known for their Italian foods and grinders, they also offer cannoli. Like most establishments who sell cannoli, Frigo’s offers traditional and chocolate-coated cannoli. However, Heinonen said the eatery also sold a cannoli that featured candies as well.

Frigo’s cannoli had a crisp shell that crunched with every bite. The cannoli also featured a light coat of powdered sugar, the trademark of a traditional cannoli. We all agreed that the shell had a delicious flavor and the filling wasn’t too sweet. Both Heinonen and Hackett said Frigo’s was one of their favorites.

One of the most notable differences between Big E’s mini cannoli and the others we tasted is, of course, the size of the dessert. This wasn’t a bad thing, however, as by the end of our tasting we wished they were all this size. The smaller size of the cannoli would make for a perfect small dessert following a meal, rather than a larger portion we found with the other cannoli.

Another difference was that the Big E’s cannoli was the chocolate chips that were on the ends of dessert, stuck to the filling. If you’re a chocolate lover, this choice will delight you and satisfy your craving. The chocolate chips presented a very chocolate forward flavor. The shell, while a little softer, was still delicious.

Like most of the other places, Giovanni’s in Agawam offered both traditional and chocolate covered cannoli. This cannoli was the standout for Eaton, as she commented on the blend of spices that were present in the flavor of the shell. “You can tell this is what they do,” she said. Once again, we were met with a crisp, crunchy shell and a delicious, but not overly sweet filling.

The chocolate covered shell, Heinonen noted, was similar to Frigo’s in that it maintained its hardness despite the chocolate coating. She said, “It still felt and tasted like eating a cannoli.” Another observation that was made was in size, as we found Giovanni’s cannoli to be the largest among those we tasted.

Like other local bakeries, Cerrato’s has been a Western Mass. favorite since its inception decades ago. Known for their custom cakes, baked goods and homemade chocolates, Cerrato’s offered the most unique flavor of the day. While we tried their traditional cannoli, they also offered a chocolate covered pumpkin pie cannoli that the group also tried.

Cerrato’s was another that offered a very flavorful shell, a favorite of the group. The powdered sugar and traditional filling furthered our favor of this cannoli, it was all around delicious.

The pumpkin pie cannoli, however, divided the staff, as pumpkin often does. Eaton, an avid lover of all things pumpkin, thought it was a subtle pumpkin flavor and the whipped, moussey texture lent itself perfectly to the flavor profile. She equated the flavor to that found in the popular Starbucks pumpkin cold brew drink, proving that it did indeed live up to its namesake.

However, Dobbs stood firm on his stance that pumpkin doesn’t belong in anything other than pies and breads. “While I support the view that cannoli don’t have to be traditional, I’m afraid I could not get behind a pumpkin pie cannoli. I adhere that pumpkin flavor should be reserved for pies, loaf breads and perhaps muffins,” he said.

Heinonen said while the whipped texture was nice and she enjoyed the flavor or the pumpkin, she agreed that it didn’t belong in a cannoli. Hackett, who isn’t a fan of pumpkin flavor, agreed and said the filling didn’t feel like it belonged in a cannoli. However, one thing everyone agreed on was that the shell was delicious and crunchy, just like that of the traditional cannoli.

Our final cannoli of the day were from Pasticceria Italia in Southwick. Again, we found a traditional and chocolate covered cannoli before us, both beautiful in appearance. Like the cannoli we had tried before them, the shells were crisp, crunchy and delicious.

The chocolate covered shell was equally delicious, crunchy and held the same trademark zesty flavor. Both cannoli were enjoyed by the group and worth the sweet indulgence.