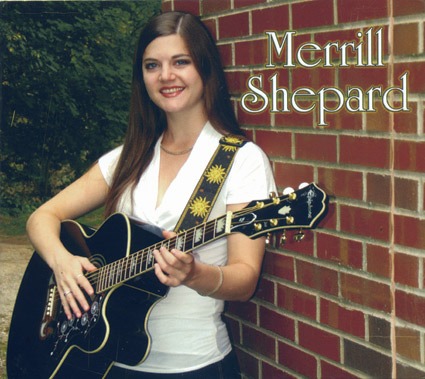 EAST LONGMEADOW – Ask Merrill Shepard how long she has been singing and the response is quick and definitive: “All my life.”

Shepard is pursuing her life-long love of music as a singer. Instead of relocating to a bigger city, she is “building a foundation” and paying her dues by performing here in Western Massachusetts.

The result is that Shepard is regularly performing in a number of venues in the greater Springfield area. She has recently released a CD of her work as well.

Her earliest performing memory she recalled with a smile is singing a solo of “The Rainbow Connection” in kindergarten. She admitted she was hooked.

She learned how to play the guitar and piano and sang growing up in her church choir. Shepard said by doing so she both had an outlet for her musical passion and received guidance about singing.

Although she attended college to pursue a career as an art teacher, she didn’t complete her studies. She realized she wanted to pursue a performing career. Although she entertains the idea of going back to college and majoring in music, she is not sure how it would actually help her career.

Instead she is intent in “chasing down every opportunity.”

She is living a typical story for someone in the arts. A server in a local restaurant, Shepard performs when she is not working. She will be appearing at The Fort in downtown Springfield on Jan. 29 and Feb. 5, 7 to 10 p.m., and at Paddy’s Irish Pub at 1060 Wilbraham Road in Springfield on Feb. 12 and 26, 7 to 10 p.m.

“I’m excited every time I’m out there able to do this,” she said.

Shepard said, “I’m building her reputation and equipment a little bit at a time.”

Working as a server “keeps me grounded,” she added.

She sells her self-titled CD at her performances. The producer of the album, A.J. Rubino, who operates Swamp Guinea Studios, is part of a group of friends and performers who provide support.

Support is important for a young performer and Shepard also noted there is less competition and more of a fellowship between local performers. She credited the assistance of performers Jonny Taylor of Whiskey Smash as well as Melissa Carreira and her brother Jeff King, who together comprise the duo version of their full band The Kings.

The Kings, she said would bring her up on stage to play while they were performing. This was during a period in which Shepard was attending open mic nights, before turning professional.

“What I thought was so cool and so kind and which goes right along with my thought about fellow artists supporting each other instead of just viewing each other as competition, is that when we’d see them they would happily take a break from performing, put a guitar in my hands and invite me onto their stage to play whatever I wanted for a 15 to 25 minute set,” she said.

Shepard continued, “They’d heard enough that they trusted that I wouldn’t embarrass them or damage their relationship with the venue owner and it helped me out in more ways than one.  I was able to get some ‘real experience’ and then I would usually be approached by the venue owner afterward.”

Her boyfriend Michael Lavoie also supports her career, she added.

Shepard has developed a wide playlist, which she said has familiar pop, country, folk and rock tunes as well as some not so familiar songs. She customizes each performance for the venue.

Personally she enjoys indie folk artist Jenny Lewis and, much to her surprise, country music.

She has written original songs but she isn’t quite ready to perform them.

Shepard has also performed with her father, veteran radio personality Brad Shepard. Merrill believes a talent for singing comes from the genetic level and credits her father for that.

What is her goal as a singer? “I have a modest goal,” she replied. “I want clubs to be charging a cover, people paying to see me. It would be really cool to make a living this way.”

For more information on Shepard got to her website at http://merrillshepard.com or her Facebook page at www.facebook.com/merrillshepardacoustic/.