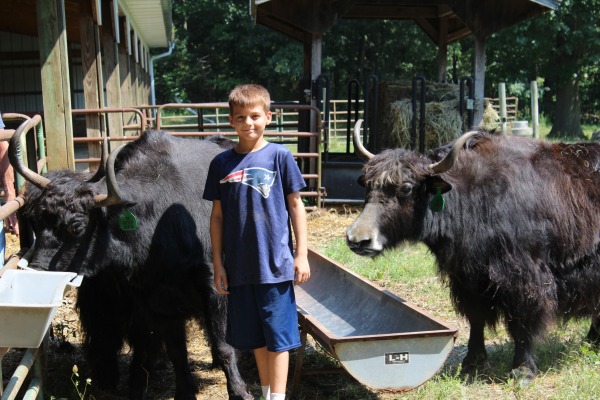 Mike Tierney’s grandson, Ray, stands with his yaks at his farm in Westfield.
Reminder Publishing photo by Danielle Eaton

WESTFIELD – Mike Tierney’s yaks were the talk of the town in West Springfield the morning of July 24 after they were spotted at Bear Hole Reservoir.

The three large, furry animals with long horns had escaped while Tierney was out of town, and were spotted by someone that morning after the yaks were said to have charged at a dog and their owner. Warnings went out from police, the mayor, and animal control about the sighting, cautioning anyone in the area to be careful.

A few hours later the yaks were corralled, contained, and taken back to Tierney’s farm in Westfield. The next morning, the West Springfield Animal Control shared a photo of the hairy mammals in their new, secure pens, but people and news outlets from Connecticut to Boston were still “yakking” about the unusual sighting.

Tierney, of Maple Brook Alpaca Farm, has a background in livestock. Before the yaks, he owned and showed a herd of about 300 alpacas. “The alpacas, when we got them, were very rare in this part of the country,” he said. “We bought those in ‘93 and were the first ones in the state, and one of the first ones in New England to have alpacas.”

However, Tierney said “By 2007 it pretty much ran its course. The market wasn’t as strong, and the supply and the demand kept growing.” So he sold all but 10 alpacas, but wasn’t done with unique animals just yet.

Tierney told Reminder Publishing he was first introduced yaks, which are native to Tibet and parts of Asia, while at a livestock show in Denver, CO, about three years ago. The domesticated animal has many agricultural uses including for milk and meat. Additionally, the animal’s hair or “fiber” can be used to make rugs, clothes, ropes, and even blankets.

The usefulness of their hair wasn’t the only reason Tierney was drawn to the animals, though. He said a variety of reasons led him to bring the yaks to Westfield, including their ability to defend themselves against predators, the fact that they aren’t a high maintenance animal, and if he did decide to raise them for meat there would be a lot of product to sell.

However, the main reason he liked the idea of having yaks was largely due to their uniqueness. “They’re very unusual to have on the East Coast,” he said. “What I do enjoy on the farm is to have something that no one else has.”

After the livestock show, Tierney got in touch with Mark and Suzanne Drumm, who own Bentwood Alpacas and Yaks in Tully, NY and breed yaks. Soon, Tierny’s yaks, Kicker, Dahli, and a small unnamed baby, were in a trailer and on their way to Westfield.

While most yaks just eat hay or graze on grass, Tierney’s yaks also enjoy grain. This, he said, is because he thinks they look better when they’re fed grain and it makes him feel better. The true benefit of the grain, however, showed that July morning when workers were trying to capture the yaks after they’d gotten loose.

“When I feed them I tap on the bucket and I call them in, so they relate that message to food,” Tierney explained. “So I thought if they ever got loose I’d have a way of calling them in, and obviously it worked because they got loose and we brought them in that way.”

He also told Reminder Publishing that the yaks are truly gentle creatures, despite the reports of them charging at someone. “The person had a large dog with them, and they allowed the dog to go up and be close, if not touch noses with the yak. A dog to the yak is a predator, so all the yak was doing was defending itself and chasing off the predator,” he said.

Tierney and his family have grown to care for and enjoy taking care of the yaks. His grandson, Ray, climbed in and out of the yak pen, petting the animals, and giving them food and water. However, Tierney said as much as he loves the animal, he’s not sure he’ll expand the herd any further in the future.

“I want to really just see if I’m up for the challenge, everything about the care is much, much different. You need better fences, you need chutes, you need ways of handling them, ways of treating them, and ways of giving them vaccinations and trimming their feet,” he explained. “I’m not sure I really want to do that. This is my second season with them, and I’m leaning towards this is enough.”

One unexpected benefit of the great Western Massachusetts yak escape, however, was that it brought people together that he hadn’t heard from in years or didn’t even know. “People volunteered to come over and help me with the fences, catch the animals, and it just brought a lot of old friends and people I didn’t even know together to help out,” he said.

Tierney said while “anything is possible,” it is unlikely the yaks will escape again as they’ve been moved to a smaller, more secure enclosure. However, Tierney is a trustee with the Big E and is in talks to have the animals at the fair so that people from all over New England can see the animals everyone spent weeks yakking about.