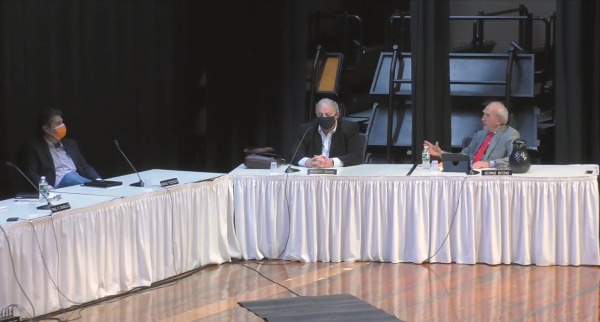 The Agawam City Council met on April 20, in which they discussed the late Agawam resident, Jack Coughlin.
Photo Credit:Agawam Media

“He will be missed, very well known in the town of Agawam. Almost everyone one time or another seen him pick up the nips. Whatever we can do to honor his memory I would love to be able to do it,” Councilor Gerald Smith said.

Coughlin was critically injured in January after being struck by a vehicle. He was known for volunteering to clean up the roads and picking up nip bottles. He died April 18 due to the injuries from the accident; Coughlin was 78 years old.

“I just want to send his family our heartfelt thoughts and prayers, we lost a wonderful man,” Councilor Dino Mercadante said.

All the councilors shared affectionate words of the late resident.

“I thought of him the other day walking down to get an ice cream. Embarrassingly, I didn’t have a plastic bag and walked about a quarter mile and picked up and saw 15 nips,” Councilor Mario Tedeschi Jr. said.

They also mentioned the work the Pioneer Valley Virtual Lions is doing with their current #Recyclethenip project.

“Congratulations to the young lady on Belvidere Street that’s picked up the pace of nip littering and has a sign on her front lawn. She is sort of carrying on Jack’s mission,” Councilor Rosemary Sandlin said.

A part of the project will be selling $20 “Don’t Litter” lawn signs starting April 24. The sign artwork was done by nine-year-old Agawam resident, Luciana DiMauro, after her neighborhood was repeatedly littered with nip bottles.

Five dollars from the sale of every sign is being donated to the GoFundMe campaign for Coughlin. He had been trying to get a bill passed to help clear the streets of nip bottles. The rest of the funding will go towards the Pioneer Valley Virtual Lions fund. Signs are also available for purchase at www.agawamlions.org and will be delivered free of charge to homes and businesses. Each sign purchase will also enter the supporter into a raffle for a $300 Visa Gift Card, which will be chosen at random May 1 and announced on the Pioneer Valley Virtual Lions Facebook page @PionnerValleyLions

Currently, there is also a bill in the Senate and in the House named Jack’s Bill. An Act promoting the proper disposal of miniature nip bottles. It would add a 5-cent deposit to miniature bottles to incentivize people to recycle them.

Councilor George Bitzas, also an Agawam Lions Club member, mentioned a meeting to plan to send letters to other towns to sponsor similar resolutions like the #Recyclethenip project.

“All the members of the Lions Club should call their representatives to make Jack’s dream come true. I’m also very happy to see other people cleaning up,”  Bitzas said.

Another topic Sandlin mentioned was a regional meeting that took place on April 26. A regional panel discussion on fiber optics that will talk about what other cities are doing about fiber. The meeting took place on Zoom and aired on YouTube as well.