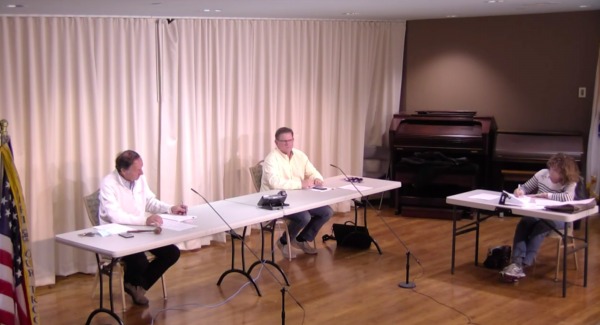 Agawam Mayor William Sapelli and Superintendent of Agawam Public Schools Steven Lemanski hosted a school committee meeting on May 12 together while members dialed into the meeting via a conference call.
Reminder Publishing file photo

AGAWAM – The Agawam School Committee met on the afternoon of May 12, where they voted to appoint an interim superintendent and discussed graduation plans for the class of 2020.

Current Agawam Public Schools Superintendent Steven Lemanski began the committee meeting by announcing his appointment of Karen Albano as principal of the  Benjamin J. Phelps Elementary School. Albano, according to Lemanski, had been serving as the interim principal of the school since January.

“Karen has done an outstanding job and will make a wonderful addition to the administrative team,” Lemanski said. “She has served Agawam for many years as a teacher and now will help lead us into the future.”

Lemanski then went on to give an update on graduation plans for the class of 2020, whose traditional graduation had been canceled due to the ongoing coronavirus pandemic. Lemanski explained that the district had been exploring a variety of different options, including moving the ceremony from Symphony Hall to the MassMutual Center. However, the cost to do that would be significantly more, he explained. “We have looked into moving from Symphony Hall into the MassMutual Center, the cost during the third week of July was double the cost of that at Symphony Hall,” he said.

He explained that the district has also explored other options, such as hosting the ceremony at the Big E Coliseum in West Springfield. This venue, Lemanski said, was “available for two days during the third week of July in between horse shows.” The high school’s athletic field “remains an option,” however, Lemanski said he was “concerned with parking and crowd control.”

He then explained that students and their families would park in the lot, get out in groups of 10 or 25, process and then return to their cars. Lemanski said, “At this event, cars will pull in, they will park in front of the stage, we will have all large cars, trucks, vans, whatever car would have to park in the back. We would have students with their families in their cars, we have a radio station that we can project into the car.”

He continued, “We will have the students get out in either 10 or 25, according to whatever phase we’re in that the governor will say that we can for large gatherings. We will have them line up six feet apart, with masks. Students will then be able to come up on stage, individually, take their mask off, come across the stage, they will have their diplomas given to them at that point, and they will walk off stage.”

Lemanski added that as students walk off stage, a professional photographer will take the students’ photos, “as we always have.” He said speeches by the valedictorian, salutatorian, class president and high school principal would also take place during the ceremony. While they were “working on some prices now for stages and anything else that might cost us,” Lemanski said the district was waiting to make a final decision until Gov. Charlie Baker announced the next steps the state would take for reopening.

The committee then took a vote that would allow Agawam to continue to participate in the School Choice program and approved several warrants before Mayor William Sapelli broached the topic of the superintendent search, which had been postponed when the pandemic reached Western Massachusetts. Lemanski’s retirement was made public on Feb. 18, when Sapelli made the announcement during his State of the City Address to the City Council.

The district had started the process of posting the position of superintendent and were beginning to solicit community feedback through listening sessions when the pandemic put the process on hold. Sapelli said attempting to conduct remote interviews had been “very cumbersome at best,” and that appointing an interim superintendent would allow the district to complete the process at a later date in the way they originally planned.

The interim superintendent, which Sapelli said would be current assistant superintendent of curriculum, instruction and human resources Sheila Hoffman, would serve from July 1, 2020 to June 30, 2021. He said if the committee were in agreement, appointing Hoffman as interim superintendent would then allow the job to be posted in December and in-person interviews conducted in January.

After Sapelli presented his thoughts and the direction in which he thought the district should go, each school committee member had a chance to express their opinions, voice any concerns they may have had and ask questions.

While each committee member expressed their support of an interim superintendent, member Wendy Rua expressed that she was “a little concerned with a year appointment” and felt that an appointment length of six months or so would make “a little more sense.” She said she knew of other districts that were hiring staff and superintendents during this time, and felt like it was possible.

He also explained that by having a six-month timeline, the district would “be asking someone to leave the district they’re in, assuming it’s a sitting superintendent, if it’s not a sitting superintendent it would certainly be someone in administration, and at some capacity they would be bailing on their district in January to come over to Agawam.” This, he felt, would “cut down your pool of candidates significantly.”
Committee member, Dawn Dubee also pointed out that the committee didn’t “know what the new school year is going to bring.” She said, “Bringing someone [in], asking them to leave their current district and coming to us with everything in chaos, is I think a little bit unreasonable.”

Later, after hearing her fellow committee members and Sapelli’s reasons for favoring the year-long contract, Rua said she was in agreement with the year-long contract and how the interview process would be conducted. However, committee members agreed that rather than post the job in December, they would wait until after the new year, and the position would be posted in January 2021. The committee then unanimously voted in favor of both appointing an interim superintendent, and that Hoffman would be appointed to the position.

Salomão’s appointment, in turn, would leave the position of principal at Granger School vacant. The position, Sapelli said, is a “very important one as you need someone in there who knows the parents, knows the school and knows the staff.” This, Sapelli said, was why teacher, Stephanie Gendron,  would step in as interim principal. That would leave the district only needing to hire a teacher for the vacant position that would be open for the 2020-2021 academic year.

MY TRUE LIFE STORY I WROTE, TO INSPIRE AND HELP OTHERS IN THEIR RELATIONSHIP.. THIS IS A TESTIMONY HOW I GOT MY HUSBAND BACK WITH A LOVE SPELL

MY NAME IS "ISABELLA LUCAS" I'm so excited my broken Marriage has been fixed and restored.. My husband is back after he had left me and our 2 kids and moved to D.C with another woman.. When he left me and moved to be with the woman, I truly and really do love him with all I've got and been heartbroken, I have to deal with a lot of depression and needing medical attention having had two heart attack after he left me... Every day and night i think of him and always wish he would come back to me, I was really so hurt and i needed a lot of help anywhere I can find. Then i searched for help online and I came across a website that suggested Dr okoso ( OKOSOTEMPLE@GMAIL.COM )can help me get my husband back with a love spell.. So I felt i give him a try. I contacted him and he gave me some spell instructions which I did,, then he did a (Love spell) on my husband. 48 hours later, my husband called me to apologize and that he's coming back home..OMG I couldn't believe, the spell was so fast and then when I got home from work,He was back, he promised he would love me till death and not part with me or the kids again...I want this testimony to inspire everyone around the world who need help in their relationship or marriage..Please contact him Dr okoso the spell caster~ OKOSOTEMPLE@GMAIL.COM
Or call him/WhatsApp +2348104720961