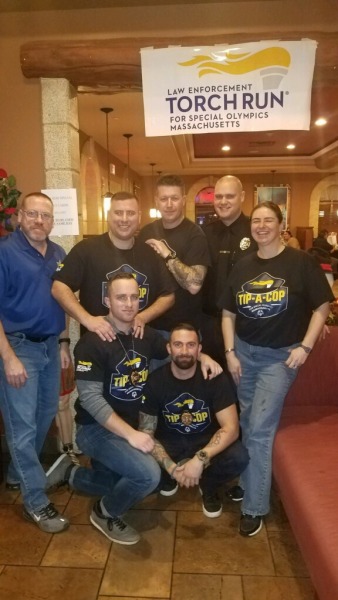 Members of the Agawam and West Springfield Police Departments gathered at Kaptain Jimmy’s on Dec. 20 to serve as guest waiters and waitresses.
Reminder Publishing submitted photo

AGAWAM – Members of the Agawam and West Springfield Police Departments came together for one night to raise money for the Special Olympics.

Sgt. Christopher Soto with the Agawam Police Department told Reminder Publishing, seven members of the department volunteered their time on Dec. 20 to be guest waiters at Kaptain Jimmy’s.

When Erica Ireland, an officer with the West Springfield Police Department, contacted the Agawam Police Department and asked if there were some staff members that wanted to volunteer their time, several responded. Soto said Ireland was the “major force behind it.”

Soto said during the event, law enforcement members were paired with waiters and waitresses who were working to help assist in a variety of ways.

"Officers throughout the night would check on tables with staff, do simple things trying to help out the waitresses the best we could,” he said. “There were a lot of waters refilled.”

At the end of the meal, an envelope was delivered to each table and patrons were given the option to donate to the Special Olympics fund via cash, check or credit card.

Soto said members of the department were there for four hours and a significant amount of people who ate dinner at the restaurant that night were aware of the event.

When the event was over, $1,430 had been raised for the Special Olympics, which Soto said he thought was an “impressive, considerable amount for four hours.”

Soto said the department would like to continue participating in the event in the coming years, especially because “it was such a successful event.”