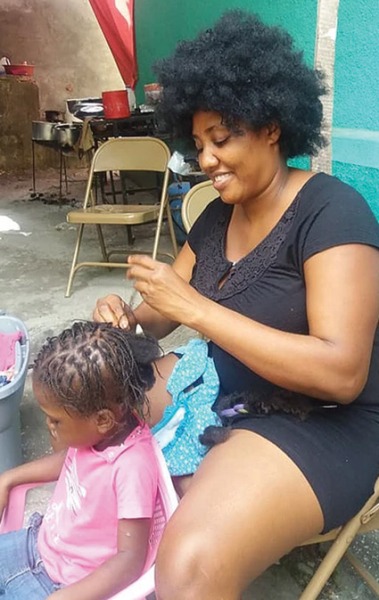 Manadia Joseph, also nicknamed Dada, is the founder of the Haitian orphange Dada’s Place. Some of her daily tasks include helping the girls maintain their hair.
Reminder Publications photo

AGAWAM – When Mary Ann Marzano took her first trip to Haiti in 2010 with the Lighthouse Christian Center, she vowed to never return – the status of poverty was too overwhelming and she felt incapable of making a difference. What she didn't know, is that she would become the sole supporter of a Haitian orphanage a few years later.

Marzano, a Feeding Hills resident, has been doing volunteer work for as long as she can remember. She is the owner of the Agawam hair salon Ubu Hair Design, and has spent her free time helping out at soup kitchens, working at local homeless shelters, visiting the elderly and cutting the hair of foster children for free.

“I don’t know how I got into volunteering, I just always enjoyed it and it was something I always did,” said Marzano. “In my experience, I just feel like it expands you and enriches you. You get more out of volunteering than the people you’re volunteering for.”

Around the time of the infamous Haitian earthquake of 2010, in which more than 220,000 people were killed, Marzano made the decision to explore international humanitarian work – she had never visited a “third-world country” before. Her curiosity led her to take a weeklong trip with the Lighthouse Christian Center to Haiti in the wake of the 7.3 earthquake’s aftermath.

“The earthquake was in the news a lot, and they kept saying things like ‘third-world country’ and ‘extremely poor,’ so I wanted to see what a third-world country really looked like. I wondered if they could really be that poor,” said Marzano.

She flew with her church group on Dec. 29, 2010 to Port-au-Prince, Haiti – the country’s capital. Marzano and other group members brought extra clothes and purchased rice to bring to the refugee camps. For a week, they met with local church pastors to learn more about how they could help.

“I was crying and just trying to decompress from the whole thing, and then something came over me,” she said. “I had a prayer and I said, ‘God, I can’t help these people. Unless you call me back with a specific mission, I am never going back.’ I don’t know where it came from, I think I just did it to relieve some guilt.”

The salon owner met businessman Nelson Martin at a leadership conference. Martin told Marzano he did business training in Haiti, and invited her to go with him to give motivational speeches to Haitian women.

In Sept. 2011, Marzano accompanied Martin to the country she swore she would never go again. It was on this trip she crossed paths with a woman named Manadia Joseph, nicknamed “Dada.”

Dada served as Marzano’s personal translator. The two women developed an unbreakable friendship, and stayed in contact after Marzano returned to the U.S. five days later.

It would be another five years before Marzano would visit again.

After Marzano left, Dada was approached by a young woman who had aged out of an orphanage at 18. She couldn’t afford to live on the streets, and feared she would have to sell herself to get by. Dada, who has medical experience as a nurse, took her in. She soon realized there were many other women in similar situations and began accepting more and more girls. Community members brought her malnourished children, babies and orphans to care for.  Eventually, Dada founded her own orphanage, called, “Dada’s Place.”

When Dada’s place reached full capacity in 2016, Marzano received a phone call from Dada that changed her life forever.

“She contacted me and said, ‘hey, I’ve been taking in these sick kids, can you send some money to help feed them?’ I said, ‘sure,’ thinking it was just going to be once in a while,” said Marzano. “I went down to Haiti to check out the orphanage, and there were 25 people crammed into four tiny rooms with no beds – a lot of them slept on the floor. There was no running water or electricity, and it was just a pit on the ground that they would cook food on. I knew I could either walk away, or try to help – and I decided I was going to take a stab at making a difference.”

Since then, Marzano has been financially supporting the orphanage through her non-profit organization, “Organic Change for Haiti.” Now, with the help of Marzano, the Montrouis orphanage houses 20 children, ranging from one-to-10 years old. Dada provides three meals a day and supports their education – in which many of them are going to school for the first time.

Marzano sends a check to the orphanage every two weeks, and tries to visit at least two or three times a year.

“They [the children] have gone from being pretty much destitute to eating regularly and sleeping. Each one has their own bed, and now they’re going to school and getting an education,” said Marzano. “It’s a lot of work emotionally, this isn’t something I could quit or walk away from. But, it’s surreal that there are 20 children whose lives are truly transformed now and have a chance at life.”

As far as fundraising efforts go, Marzano said she receives many donations based on word-of-mouth sharing and speaking opportunities where she can talk about the details of the orphanage. She also collects clothes and hosts quarter auctions.

To donate or learn more about the orphanage, head over to the Organic Change for Haiti website at https://www.organicchangeforhaiti.org/.

If you would like Marzano to come speak at your church or other event, contact her at ma.marzano@comcast.net.