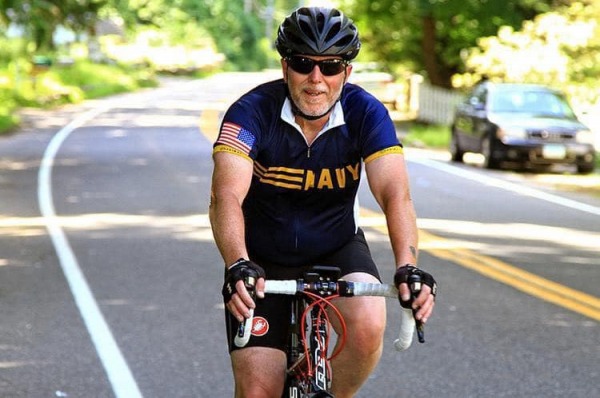 Michael Henry (above) along with Michael Donahue will ride in a bikeathon to raise money for cancer research and patient treatments at the Dana-Farber Cancer Institute in Boston.
Reminder Publishing submitted photo

AGAWAM – Two avid cyclists from Agawam will be pedaling this weekend to raise money that will go directly to the Dana-Farber Cancer Institute in Boston for cancer research and patient treatments.

Michael Henry and Michael Donahue are among more than 6,000 cyclists who will ride a one- or two-day route on Aug. 6 and 7 in the annual Pan-Mass Challenge (PMC) bikeathon. PMC 2022 – its 43rd year – will include 16 routes from 25 to 210 miles designed to cater to all levels of cycling and fundraising ability.

The goal is to raise $66 million to provide Dana-Farber’s doctors and researchers with the necessary resources to discover cures for all cancers. Most riders participate in honor of a family member or friend fighting cancer.

Henry will do the one-day ride on Sunday between the Bourne Bridge and the Provincetown Inn – about 68 miles. Donahue will bike in the two-day route that starts in Sturbridge with a stop in Bourne on Saturday night. He will continue to Provincetown on Sunday for a total distance of approximately 192 miles.

Henry was inspired to pedal in the bikeathon in 2018 after seeing first-hand how new treatments can make a difference for cancer patients. Shortly after he began dating his future wife that year, she received a breast cancer diagnosis.

“I got to see first-hand, the advancements that have been made in cancer research and technology – and how they not only gave cancer patients like my wife access to better treatments, but also the ability to live longer, more fulfilling lives,” he explained.

Henry rides in the PMC to support his wife, who is a cancer survivor. He’s also pedaling for “those who battle this disease on a daily basis and for the ones that we have lost along the way,” including a “dear friend” of he and his wife who died from cancer.

Donahue said he’s making the journey in the PMC because he’s seen several close family members battle cancer. “We try to be supportive and help when we can, but it’s heartbreaking to know we can’t do more. By participating in the PMC, at least I can help raise money and awareness for Dana-Farber.”

He added that he’s riding in honor of his wife’s uncle, Jake Perry, and his aunt, Denise Simon. “My dad survived melanoma, too.

Jake has been battling esophageal cancer for a number of years and has been getting treatment at the Sister Caritas Cancer Center at Mercy Medical Center. Denise is currently wrapping up her treatment for tongue cancer at Dana Farber.”

Henry’s goal this year is to raise $6,500 – and he’s a little more than halfway there. “It’s been more difficult this year with the current economy, which I fully understand,” he said.

“Unfortunately, cancer never takes time off – and hitting my goal is something I’m focused on doing.”

Whenever he gets a donation, Henry asks that it be in honor someone who is a cancer survivor, someone who may still be fighting the battle or someone who has died of cancer.

“Doing this gives [the] donor the comfort of knowing that I’m carrying that person’s name with me from beginning to end. It also gives me such a sense of purpose – and keeps me driven to finish, even if I start to lose fuel,” explained Henry.

This is Donahue’s second year doing the PMC and riding the two-day route. He said he’s never been an athletically gifted person, but he saw the bikeathon as “a great challenge” to tackle on and off his bike.

“I raised over $7,000 thanks to the generosity of family and friends. I personally donated as well. I’m also lucky that my employer (Voya Financial) matches my donation,” he added.

Although Donahue set a $6,000 goal for this year, he said he’d “love to beat” last year’s total. He said while there’s a small registration fee riders pay to cover expenses related to the event, “every single dollar donated goes” to Dana Farber.

“I’m currently just under halfway to my goal. I don’t receive awards or incentives based on donations I help raise. Any donation will help – even a few dollars – and will go right to Dana-Farber to help with their work,” he added.

Both men enjoy riding their bikes for long distances. Henry, 61 a long-distance cycler since 1981, tries to ride most weekends when weather allows. During the winter, he trains at local gym. Donahue, 40, who has been riding regularly since 2019, usually rides three to 10 hours each week depending on work and life commitments.

Donahue tries to ride outside as much as he can. When the weather isn’t ideal, he has an indoor trainer he uses year-round. He’s done some 60-to-100-mile rides over the past few years so he said he knows what to expect, but added that the PMC bikeathon is still a challenge.

His bike is a specialized Roubaix, with all-carbon frame/wheels that’s designed for long days in the saddle. “I was lucky to find it in my size last year because bikes and bike parts were hard to come by during the [coronavirus] pandemic. I’m 6’5” – so I needed the biggest one they make.”

Henry, who recently updated his bike to a new Trek Emonda SL5 with a carbon frame, has been preparing for the PMC by riding several loops that range between 20 and 60 miles. He also incorporates strength training whenever he gets to the gym.

The PMC is the nation’s single most successful athletic fundraiser, donating 100 percent of every rider-raised dollar to Dana-Farber. Founded in 1980, the PMC has raised $831 million for adult and pediatric patient care and cancer research. The bikeathon also is Dana-Farber’s largest single contributor, accounting for 55 percent of its Jimmy Fund’s annual revenue.

The PMC is presented by the Red Sox Foundation® and M&T Bank. To make a financial contribution to a rider or to register as a rider, visit www.pmc.org, or call (800) WE-CYCLE. Connect with #PMC2022 on Facebook, Twitter, Instagram, and LinkedIn.