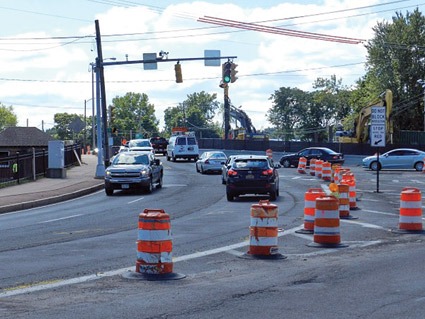 AGAWAM –  A few months into an almost three-year long construction project to rebuild the Morgan-Sullivan Bridge proved difficult to navigate during one of the busiest times of year for West Springfield and Agawam: the Big E.

For months, residents and town leaders expressed their concerns about traffic. In the months leading up to the two-week long fair, Agawam Mayor William Sapelli and West Springfield Mayor William Reichelt met with Big E representatives, police departments from both towns and each other to try to come up with a plan.

Sapelli said the meetings between everyone began “in May or June” to begin planning early. “What we did was anticipated the issue, tried to get out in front of it,” he told Reminder Publishing.

Big E officials, such as President Gene Cassidy, Sapelli said, were incredibly helpful when it came to coordinating traffic and safety plans with the towns.

“They said they were gonna take out certain ads and promote avoiding certain areas. All advertising brochures indicated proper patterns,” he said.

Despite all the planning Sapelli said, “You never know if a plan is going to work.”

All the advance planning paid off for both towns though, Sapelli said, and he described traffic as “outstanding.”

“Even police told us this was the best year ever with traffic control,” he stated.

One reason he believes it went so well was the cooperation from the Big E and the shuttles they provided.

“What they also did was supplied shuttles. One from Enfield Mall, one from Holyoke. They supplied traffic from the north a shuttle, from the south a shuttle,” he said. “[They] shuttled people in [and] kept buses going.”

Sapelli said the Big E also “encouraged people to take advantage of parking before coming to the area.”

He did note that decreased Big E attendance was not a factor with how smoothly traffic went. “It wasn’t because of lower attendance,” he stated.

During the 2020 Big E, Sapelli said while there’s nothing particularly notable to be changed and improve traffic during the fair, the towns and officials would “regroup [to] see what we can do different.”

Ideally, he said they’d like to duplicate what they did during 2019, however they will “revisit it again in June and see what we can do.”

Both Reichelt and Sapelli agreed one factor that will help with the flow of traffic during the 2020 Big E is the addition of a new lane on the bridge.

“Obviously having one lane made things difficult,” Reichelt said. “We hope that by next year they will have the other side open, so there will be three lanes,” he said.

Another positive factor that will impact traffic during future Big E’s is the completion date of the project, which Sapelli said he found out on the morning of Jan. 10, was moved up by almost a year.

He explained that the Baker-Polito Administration and the Massachusetts Department of Transportation (DOT) had agreed to a $1.5 million contract with Northern Construction Service to move up the completion date 285 days earlier than the original date of May 21, 2022.

The construction on the bridge is now scheduled to be completed on Aug. 9, 2021, just before the Big E in September.

“So we have to deal with September of ‘20 then September ‘21 the bridge will be done. So we won’t have to worry about it,” Sapelli said.

Overall, he said, he’d been pleased with the way traffic went during the 2019 Big E. “I’m so pleased with the cooperation of the Big E and the work of the West Springfield and Agawam Police Departments and the traffic duty,” he said. “They did a great job of mitigating any issues with the traffic During the Big E there was an influx of large vehicles whether it’s rides, produce, buses.That three week period, might as well say four, it’s a challenge and they did a great job.”