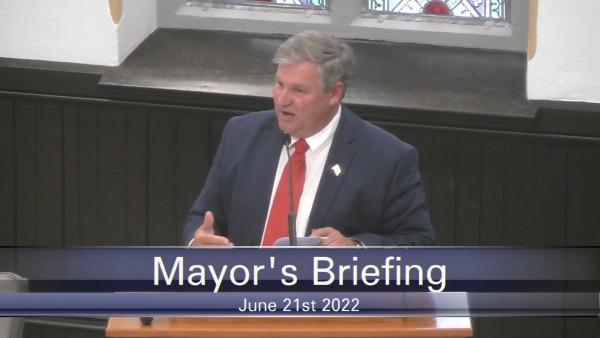 CHICOPEE – With budget season underway, the City Council will dedicate extra time for reviewing the school district’s budget after extensive discussion during its June 21 meeting.

The School Committee voted to approve a $104,813,451 district budget during their June 1 meeting. The vote was not unanimous, as Mayor and School Committee Chairperson John Vieau represented the one vote against the budget. Vieau expressed that the city’s yearly allotment of $1.25 million to the school budget was not required due to the inclusion of coronavirus pandemic relief through federal Elementary and Secondary School Emergency Relief (ESSER) and state Student Opportunity Act funds.

During the Mayor’s Briefing, Vieau expanded upon his perspective.

“There’s a misnomer out there that I have cut $1.25 million from the school budget. It’s simply not true. I never committed the money,” said Vieau.

The mayor said he met with the city assessors to determine the net spending amount for the Chicopee School Department budget. After they determined the net amount was $103.5 million, Vieau deemed it unnecessary to commit an additional $1.25 million due to the school district’s sturdy state financially.

“Frankly, I believe the schools are in excellent shape right now going into fiscal year 2023 [FY23]. They have $7 million of carryover money from last year, meaning that the money we gave them above net school spending last year, they didn’t use it,” said Vieau.

Additionally, Vieau highlighted the $23 million in ESSER funds that is still available in the district’s reserve. The school district is required to spend the ESSER funds as a means of curbing the educational gap caused by the coronavirus pandemic, with the funds boasting fewer restrictions than federal American Rescue Plan Act (ARPA) funds awarded to the city. The mayor highlighted that the district also experienced growth via the addition of 45 employees and 3 percent raises allocated to the budget.

Vieau stressed that his decision is on the behalf of Chicopee residents.

“As the mayor of the city of Chicopee, I have to be prudent and responsible. I can not take the general public another $1.25 million when our budget has gone up roughly 6.5 percent. … They have enough money, frankly, to run the next year and not have an issue at all,” said Vieau.

Vieau said any additional expenses needed outside of the FY23 budget will be addressed promptly by him and the City Council.

“I will commit publicly right now to tell you that I will bring that amount to the City Council immediately. … I am committed 100 percent to making sure our kids are receiving the best education they can,” said Vieau, referencing any additional expenses.

Before the council addressed the school budget, members of the school district expressed their opposition to Vieau’s stance. President of the Chicopee Education Association Laura Demakis advocated for the council to support the School Committee-approved budget versus the mayor’s proposed budget that would remove the $1.25 million of city funds.

Demakis said she joined the Chicopee Education Association shortly after former Mayor Richard Kos implemented the $1.25 million yearly infusions in 2017. It was during an era where insurance and cost of living expenses were rising similar to current times.

“Cost of living is up 5 percent this year and 3 percent next year. Similar circumstances, but instead of money being given to us, it is being taken away,” said Demakis.

Demakis also said that some relief funds, like money awarded from the Student Opportunity Act, will not be able to aid the FY23 budget completely due to act dispensing limited funds over a six-year period.

“What is that $1.25 million going to do? It’s going to provide 21 additional teachers, or 42 educational support professionals, smaller class sizes, more structured and routine environments…it would give us cleaner schools [and] services that students need to have the education they are entitled to by the law,” said Demakis.

Other teachers also advocated for the city’s inclusion of $1.25 million.

In explaining the order, Dobosz said the School Department should express its perspectives on the budget after hearing Mayor Vieau’s stance.

“I think it would be worth it for the School Department to come and give their side in a Finance meeting. Personally, I believe that the $1.25 million should be spent on the schools,” said Dobosz.

The councilor revealed after discussions with Assistant Superintendent Matthew Francis that the school district could face roadblocks in its plans to implement universal preschool education if the $1.25 million is cut.

Pniak-Costello, Ward 1 City Councilor Joel McAuliffe and Ward 3 City Councilor Delmarina López also advocated for the $1.25 million to be included. McAuliffe said the school district budget should be higher than the net spending amount, but also supported the mayor’s good-faith promise that he will support the schools with any additional requests needed.

“I think the major problem here is they got $23 million they didn’t use and they ought to tell us how they’ll spend it. … If we agree to it, we at least need to know what the priorities are,” said Tillotson.

The Finance Subcommittee will host a meeting on June 30 at 5:30 p.m. to discuss the school district budget. The council will also undergo extensive hearings of the city’s $228 million budget during that week.