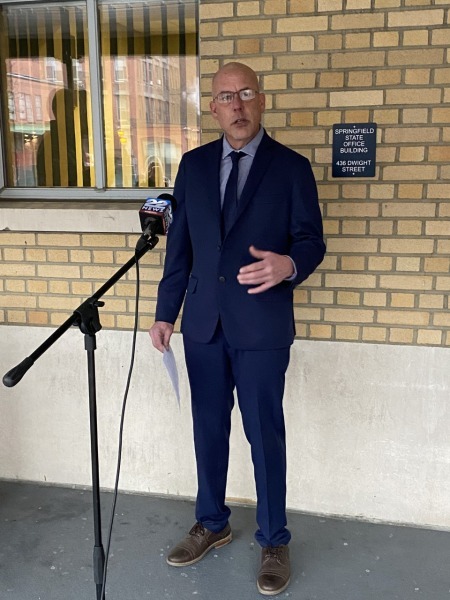 CHICOPEE – Ward 2 City Councilor Shane Brooks announced his decision to remove himself for the state representative race for the 8th Hampden District seat on May 31.

Brooks was the first candidate to take out nomination papers in the wake of state Rep. Joseph Wagner’s decision to not seek re-election after 31 years in office. He announced his candidacy during a Feb. 22 press conference outside of the State House building in Springfield.

Reflecting on the decision, Brooks said he spent the week prior considering his candidacy during a vacation. Ultimately, Brooks expressed that his work as Vice President at the Gándara Center became a challenge to move on from.

“What I currently do professionally, which is run the largest division in the Gándara Center, and I do residential placement for DCF [Department of Children and Families]-involved kids. That to me has been something that’s a real passion for a while…I would just miss it too much,” said Brooks in an interview with Reminder Publishing.

Along with two years in his role at Gándara, Brooks has 27 years of experience in human services.

The Ward 2 city councilor also explained that his removal from the race represented “a financial decision.” With two daughters still in college, Brooks said that his life expanses dwarfed the state representative salary.

“It really came down to a financial decision…There’s real life expenses outside of what a state representative salary would cover…It really came down to I couldn’t reckon the salary cut I would have to take and the fact I would have to stop doing the kind of work that I do and that I love,” said Brooks, who shared that the state representative position would come with a roughly $50,000 pay cut from his current role.

Brooks continued, “Financially, I have obligations to the kids still and the salary is not commensurate to my years of experience in my private sector work. Sometimes that becomes a real consideration. It’s a real-life concern of having enough revenue coming in every month to pay all your bills and obligations.”

Brooks concluded that the timing for running was “poor for him personally.” He said he wanted to make his decision before the deadline for submitting signatures so the city would not have to reprint ballots.

Moving forward, Brooks explained he has “a lot of things he wants to accomplish professionally and personally.” He shared that his work in the council remains paramount as Chicopee navigates itself out of the impacts of the coronavirus pandemic.

“I’m not optimistic that the pandemic is over…I really want to help be apart of the management of getting us out of [the coronavirus pandemic] to whatever normal is going to look like for the city,” said Brooks.

The city councilor highlighted efforts by the council and Mayor John Vieau’s office, such as recently approved employee retention bonuses and both entities’ judicious spending patterns, as important steps forward.

Brooks cited other ongoing issues in the city, including out of date school buildings, addressing the economic viability of Chicopee Center and finding a tenant for the former SilverBrick property, as key issues to address going forward. The councilor said it’s also important to advocate for quality-of-life issues within Ward 2.

“A pothole for somebody in Ward 2 might not mean the same to someone in Ward 6…there are a lot of quality-of-life issues we address on a day-to-day basis that I think are very important,” said Brooks.

The councilor stressed that his work on the council continues to be a rewarding experience. “That’s why I love the work of the council is because everyday there is a different phone call or request for something that will help improve the quality of life for one of the citizens we represent,” said Brooks.