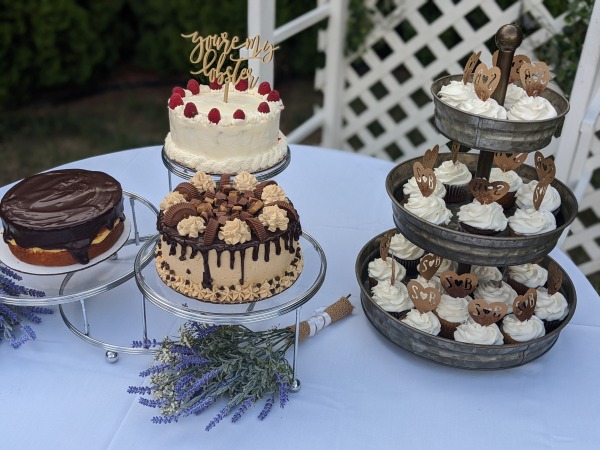 CHICOPEE – Adam Malmborg, a fifth grade teacher at Chicopee’s Bowe Elementary School and an East Longmeadow resident, is competing for the title of “The Greatest Baker.”

The Greatest Baker is a worldwide competition where bakers are invited to showcase their creations and receive votes in order to win. It is hosted by Jen Barney, a two-time Food Network Baking Champion and Meringue Bakery & Cafe owner. Stuffed Puffs is the official sponsor for the competition.

The winner of The Greatest Baker competition will receive recognition as 2020’s Greatest Baker, a year’s supply of Stuffed Puffs, a feature in Bake from Scratch Magazine and a grand prize of $10,000.

Malmborg said he heard about this competition through a friend who sent it to him on social media. On a whim, he then created a profile and uploaded photos of his desserts.

“I have never done anything like this and I was like, ‘you know what why not?’” said Malmborg.

According to Malmborg, he has loved baking since he was young, thanks to his mother and grandmother. He didn’t go to culinary school originally, but instead decided to pursue a career in teaching at Westfield State University. Although he loves working with kids, he said his passion for baking kept growing and he wanted to explore it.

“I really wanted to see where it would take me,” he said.

Malmborg then decided to go to culinary school at the Connecticut Culinary Institute. For his internship, he got accepted to work at Walt Disney World. There, he worked as a pastry chef at The Swan and Dolphin Hotel.

After he graduated from culinary school, Malmborg finished earning his Master’s at the University of Phoenix and continued his work in the education field. He said that his passion has always been with kids, but if he was able to combine that with baking he would be happy.

With the grand prize money, Malmborg said he would love to open a bakery. His goal would be to have a bakery where he can teach people young and old how to bake what they love.

“My passion’s always been with kids and I love teaching kids, so if I was able to combine both things that I love I would be very happy,” said Malmborg.

“Hero Votes” are also offered on The Greatest Baker website. A Hero Vote is a purchased vote that supports Malmborg in the competition, but also benefits the No Kid Hungry Foundation. All money raised through Hero Votes will benefit the foundation.

According to The Greatest Baker website, “No child should go hungry. But in the wake of the Coronavirus pandemic, one in four kids could face hunger this year. Your paid votes help us contribute to ending childhood hunger and giving kids the healthy food they need to thrive.” There is a minimum donation of $10 to purchase votes.

Malmborg is currently taking a business class through Holyoke Community College where he is learning how to prepare for a future business. He is interested in beginning to sell his baked goods and showcase his talent further.

Malmborg said he is also looking to venture into YouTube cooking videos, thanks to the push and inspiration from his nephews.

He hopes that this will be a big step for his future baking journey.

I have known Adam Malmborg for close to 10 years now.  He is a top notch baker and an amazing educator.  I wish the best for him.  I hope you all go on Facebook and vote for him!!! Lets see him to #1