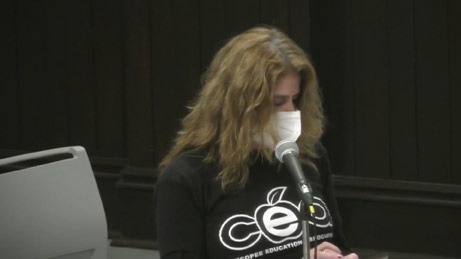 CHICOPEE – Paraprofessionals articulated their perspective during a public speak-out session of Chicopee’s Jan. 5 School Committee meeting, citing meager wages as a central point of contention with their contracts.

“We as educators are considered poverty level, requiring many to work two, three or even four jobs just to make ends meet. This is insulting, demeaning and demoralizing. We love what we do, but we need recognition and pay that we so rightly deserve,” said Bienvenue.

Union President of the Chicopee Education Association Laura Demakis also discussed the ongoing issue in the district. She stressed that paraprofessionals, like all school staff members, play an essential role in day-to-day operations. “We all consider ourselves educators, as well as each other, and a very integral part of the students’ education here in Chicopee…Every single one of [the union’s] members is equally responsible for the success of our students,” said Demakis.

After detailing the extensive duties of paraprofessionals, Demakis expressed her hope that a united front from the union will achieve their goal. “Everyone is educators, equally among and equally providing for the education of the students of Chicopee,” said Demakis in her final remarks as applause erupted.

The School Committee also welcomed four new members with the year’s inaugural meeting. Timothy Wagner of Ward 1, Grace Schofield of Ward 5, Samuel Shumsky of Ward 6 and Ronald Bernard of Ward 9 debuted in their positions after each won in unopposed election bids. Former School Committee At-Large Douglas Girouard is transitioning from his position to the Ward 8 representative, while Susan Szetela-Lopes moves from the Ward 6 position to an At-Large committee member role.

Wagner and Shumsky expressed gratitude for their newly earned positions.
“I’d just like to thank the voters of Ward 1 for giving me a chance to serve them. Truly it’s an honor to give back to the city for all that it’s given me and my family,” said Wagner.

Shumsky said, “I’d like to thank the voters of Ward 6 for allowing me this chance to represent them. I look forward to working with my fellow members of the School Committee and school administrators.”

The School Committee also took time to vote for their leadership positions, with Szetela-Lopes receiving unanimous support to become the committee’s vice chair. Ward 4 Committee Member Sandra Peret will continue in role her as the committee’s liaison to city government after running unopposed.

The School Committee will meet again on Jan. 19.