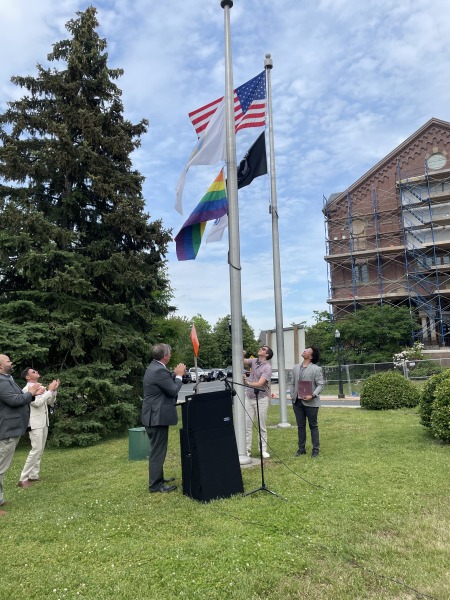 CHICOPEE – The City of Chicopee officially recognized June as LGBTQ+ Pride Month at their yearly Pride Flag raising on June 2.

During the event, Pouliot shared the story of his own journey being an LGBTQ+ individual.

“As a gay person, I remember being very young and being bullied about being gay before I even knew what that meant. That led to a very slow evolution and willingness to open myself up to self-discovery and trying to understand who I was as a person,” Pouliot said. “Eventually, that led to acceptance and then all of the healing that had to come after that between myself, my family and my friends mostly related to all of the pressure I put on myself.”

Alomar spoke on the importance of raising the flag to represent pride over shame.

“We’re celebrating life and its diversity and we celebrate that we have the opportunity every day to live it to the fullest without exception of sexual orientation or gender identity,” Alomar said.

He emphasized the bravery of the LGBTQ+ community when it comes to overcoming injustices “that should not have been.”

Alomar also took the time to recognize black and transgender members of the LGBTQ+ community who have been disproportionately targeted and killed.

“Raising this flag reminds us that there is still a long way to go and there are still sectors of our population that need the spotlight,” he said.

Vieau stated how proud Chicopee is of all members of their community and that this month helps recognize the importance of acceptance.

Both Gomez and Oliveira spoke on fighting for LGBTQ+ rights, inclusion and equality in the Massachusetts government.

“As your State Senator, I am more than just an ally: I’m your brother, I’m somebody that’s going to be fighting tooth and nail in the halls of the State Senate and also in the House and here in the district,” Gomez said.

To end the event, Vieau read the official proclamation where the City of Chicopee recognized June as Pride Month. Pouliot and Alomar raised the Pride Flag together.