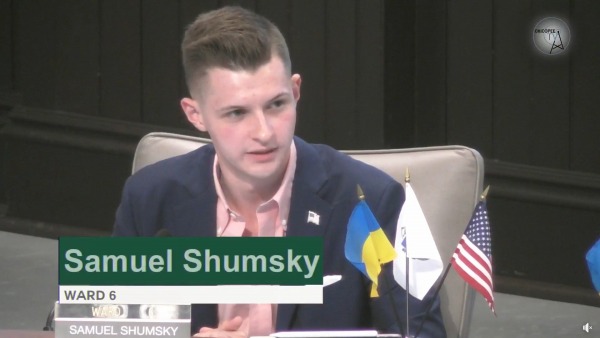 Neighbor of the Litwin area David Rossi addressed concerns about the dangerous activity during the public speak out period of the School Committee’s July 20 meeting. Rossi said he and his neighbors “have been battling a serious speeding and security issue” that has impacted the neighboring streets and students alike over the last few years. In May of 2021, Rossi and his peers submitted a petition signed by 120 residents requesting additional security measures in the area.

“Over the years, we’ve seen motorists that are excessively speeding on our side streets that go to Litwin Lane. We see them going by our flashing light school buses that are letting students on and off and we also see them totally ignoring four-way stop signs,” said Rossi.
Rossi said he has worked with Mayor John Vieau, Vice Chair of the School Committee Susan Szetela Lopes, At-Large School Committee member Chester Szetela, Ward 6 School Committee member Samuel Shumsky and members of the City Council in addressing the matter. He aspires for new protocols to further protect the kids and neighbors around the Litwin area.

To combat the growing issue, Shumsky motioned for the state to conduct a traffic study on the area that would expand the Litwin school zone. If approved by the Massachusetts Department of Transportation, the area would add Moreau Drive and Olko Circle as inclusions for the new school zone. Both streets would then feature a 20-mph speed limit and draw larger fines for speeding infractions.

Vieau backed Shumsky’s stance, sharing that the city is already looking into committing a traffic study in the area, including utilizing local professional engineers on the issue. The committee unanimously supported Shumsky’s motion.

In an interview with Reminder Publishing, Shumsky highlighted the importance of achieving an expanded school zone in the Litwin area. Along with the elementary school, the nearby area also features two full-time day care centers and the adult disability program center Sunshine Village.

“It’s all about safety…It’s our job as a city to make sure we enforce the traffic and speeding laws so everyone can remain safe in the neighborhood. No one should have to worry about a car flying around the corner or hitting their child,” said Shumsky.

Shumsky said he grew up in the neighborhood and attended Litwin Elementary School as a child. He noticed excessive speeding throughout his time in the area.

Aside from the requested traffic study, Shumsky is proposing additional safety inclusions. The School Committee member shared that he reached out to the Chicopee Department of Public Works to see if lines can added be added in front of stop signs at the four-way intersection near Litwin. He hopes for these efforts to improve the safety of the area.

“By increasing the school zone, I am hoping that it will deter anyone who is speeding…I have high hopes,” said Shumsky.