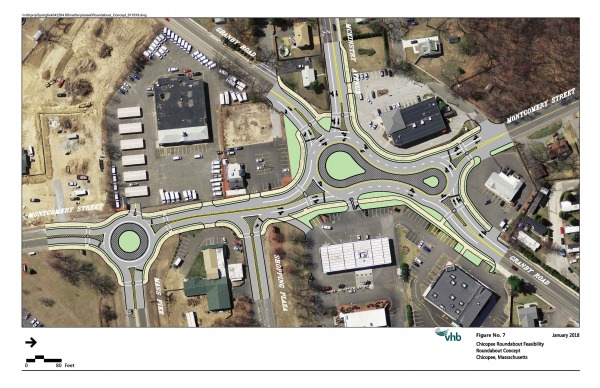 A peanut shaped roundabout has been proposed to improve traffic congestion at the intersection of Mongtomery Street, Granby Road and McKinstry Avenue in Chicopee.
Photo Courtesy:?City of Chicopee

CHICOPEE –  The intersection of Montgomery Street, Granby Road and McKinstry Avenue in Chicopee has been a longtime source of traffic troubles for residents, but in coming years that could change.

Chicopee City Council President Shane Brooks told Reminder Publishing the intersection has become to be known as “Four Corners” due to four former competing gas stations that were once located in the area. The intersection, Brooks said, has “always been somewhat of a concern, traffic wise.”

Brooks explained there have been numerous attempts to alleviate traffic congestion at the intersection, but none of them have been successful so far.

“They attempted to alleviate congestion, but none of it has been truly successful,” he stated. “We’ve never really been able to figure out a way to alleviate it, for traffic to flow freely.

He believes the only thing that will successfully alleviate the congestion “is a better design to alleviate traffic flow so it’s not the bottleneck.”

However, Brooks said a redesign for the intersection is on the horizon. Currently, the project is in the design phase.

According to a press release from the City of Chicopee, the firm Vanasse Hangen Brustlin, Inc. (VHB) has been hired by the city to “study and design improvements” for the intersection. Working with the city’s engineering department, a “conceptual” design was made public and presented to the Massachusetts Department of Transportation (MassDOT) on Oct. 23, 2019.

The design presented includes a peanut-shaped roundabout. The shape, the release explained, is “to account for the dual intersections and their physical separation.” The roundabout would accommodate all types of vehicles including emergency vehicles, buses and trucks with trailers.

The design also plans for a second roundabout at the Mass Pike entrance and “roadway improvements” at the Big Y/BJ’s shopping plaza entrance. What the improvements will include has not yet been specified.

Brooks said this is just the beginning of the process though. While a date has not been set, a public hearing will take place as part of the process and will give residents the opportunity to voice concerns or ask questions they may have.

Brooks said upon seeing the initial design, he has some concerns himself. One of his concerns was the size of the roundabout and how much space it would take up in relation to the neighboring businesses.

“The rendering I did see, it looked like the roundabout would go into the physical location of the Big Y Express,” he commented. Brooks said he also wouldn’t “want to penalize retail in the area”  by having “businesses affected because of construction.”

Another one of his major concerns, he said, would be how traffic would be managed throughout construction. “One question I have is how the construction would work. [When] you shut down a central artery, that would have challenges for travelers.

As the project is currently in the design phase, Brooks said as of right now the only thing the city can do is wait and make sure they are “shovel ready.”

He said, “When our community is called, we want to do our due diligence to make sure we’re prepared to go so there’s not another community that might be able to leapfrog us.”

While what it means to be “shovel ready” is “dependent on the project.” Brooks said “We’ll do whatever it takes to get the project into fruition.When they call on us to be a partner, the city is always ready."

The press release said, due to “the design, approval and funding schedule” construction on the proposed roundabout wouldn’t begin until 2025. Brooks said he is excited to see any changes and “anything is going to help.”

“What we have now is not ideal. There’s a lot of frustration on the local level from constituents, especially at peak times,” he said. “Especially when people are trying to get to Chicopee High when there’s a high volume from retail. Any small improvements there will be beneficial.”

He continued, and commended the representatives from MassDOT that have worked with the city in the past. “It’s been our experience that our partners at the state level always want to do what’s best for the city.”

He continued and said he is looking forward to the “progress that the rotary and roundabout will bring.”