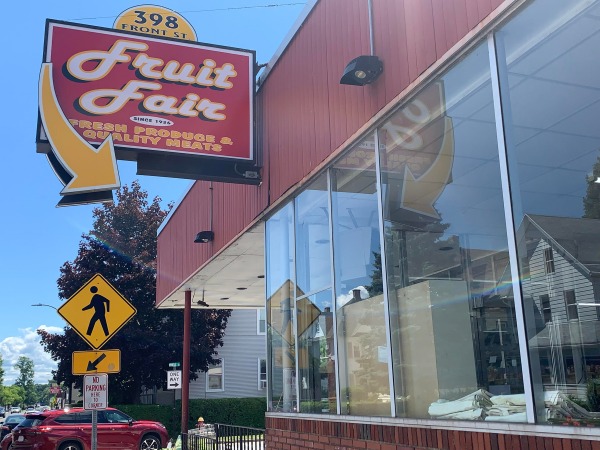 CHICOPEE – With 86 years of history to its name, the Fruit Fair grocery store remains a community staple focused on decreasing rising food insecurity trends.
Owners of Fruit Fair Samaita and Jared Newell purchased the 389 Front St. location three years ago. Since acquiring the property, Jared shared that the duo remodeled every facet of the once-decaying space.

“I think we have touched almost every aspect of this building…Almost everything here when he first took over was falling apart. It was an uphill battle just to start,” said Jared in an interview with Reminder Publishing.

Samaita and Jared said they repaired the grocery store’s floors and roof, added new signage and shopping carts and also created a new beer and wine cooler. Additionally, Fruit Fair also introduced new offerings to the public, including a daily hot buffet filled with fresh local cuisines that are homemade or outsourced from regional staples, like Chicopee Provisions.

For the Newells, continuing Fruit Fair’s distinguished role in the community remains a central objective. Jared explained that the grocery store makes every effort to connect with local customers.

“We’ve tried to maintain its reputation through word of mouth of providing fresh and full products…We’ve tried to take in recommendations from all of our customers. For a lot of people who come in here, this has been their grocery store for a long time,” said Jared.

“We support a lot of independent brewers, farms and bakeries around the area,” said Samaita in an interview with Reminder Publishing. Some of the local outlets include Koffee Kup Bakery, Bernadino’s Bakery and Chmura’s Bakery.

Fruit Fair’s role in the community remains significant as food insecurity trends continue to rise. When the Newells purchased the store in 2019, it existed as one of the lone sources of groceries in an area that was considered a food desert by the United States Department of Agriculture. Samaita shared that the food insecurity rate in Chicopee remains above 20 percent.

“Chicopee’s food insecurity rate is over 20 percent and it’s second in the state, right after Dorchester. The household income is less than half of the average of Massachusetts. People don’t have transportation, people don’t have access to fresh food, it’s like a food swamp,” said Samiata.

Samiata explained that most of the other inexpensive food options in the area consist of snacks and junk food.

“It’s like this cycle where people only have access to these foods and their health breaks down…It’s like a generational poverty, and we are trying to break the cycle,” said Samiata.

Along with providing affordable groceries, Fruit Fair is also becoming more self-sufficient through the development of their own vegetable garden. Jared explained that the grocer is positioning a vertical garden on the roof of the store. The garden will contain lettuce, tomatoes, berries, herbs and other produce items.

The garden will be growing over the next few weeks as Fruit Fair aims to produce crops before the end of farming season. For Fruit Fair, the garden project marks a continuation of their efforts to aid the community.

“Our focus is really people over profit…We want to make Chicopee as self-sufficient as possible,” said Samiata.