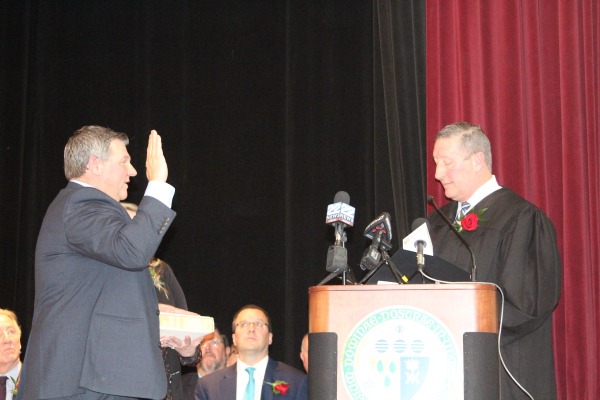 CHICOPEE – Mayor John Vieau took the oath of office as mayor and pledged to work for all the citizens of Chicopee in a ceremony conducted in the Berchmans Hall of the College of Our Lady of the Elms on Jan. 6.

Other elected officials such as the City Council and School Committee also received the oath of office at the event.

Congressman Richard Neal attended the ceremony and offered the incoming mayor the advice that had been given to him by Mayor Charles Ryan when Neal took the oath for his first term as mayor of Springfield: “Don’t get too excited when it’s going well and don’t get too upset when it’s not.”

The inauguration was indeed a family affair for the new mayor with his son John Henry leading the audience in the Pledge of Allegiance and his daughter Alyssa singing the National Anthem.

Vieau opened his address with the declaration, “What an incredible day this is.” He thanked his family and the supporters in his campaign.

“When you run for mayor you can’t do it alone,” he said.

He said he was looking forward to working with both the City Council and the School Committee. “As a city councilor I’ve always supported school and that will not change,” he said.

He pledged being financially cautious and said, “We will continue progress at a pace we can afford.”

He said he would work with the Planning Department, the Chamber of Commerce and the Cultural Council on economic development.

“I see so much potential downtown,” he explained.

There will also be a focus on public safety during his administration, he noted. “I know the community has challenges but I’m convinced Chicopee is a safe, happy place to live and raise a family,” he added.

Vieau mentioned other priorities from continuing city-backed events such as the Downtown Get Down to examining how to best address the aging wastewater treatment plant.

He said he would work to gain the trust from voters who did not vote for him.

“It is truly an honor to be the 41st mayor of Chicopee,” Vieau said. “I feel truly blessed to represent the city of Chicopee.”