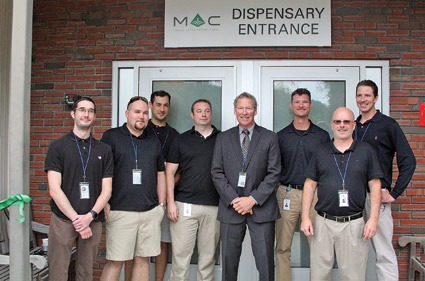 President and CEO?of Mass?Alternative Care, Kevin Collins, stands before the entrance of the dispensary on opening day accompanied by his staff.
Reminder Publishing photo by Stephanie Trombley

CHICOPEE – The ribbon-cutting ceremony for Mass Alternative Care took place on September 21 at their new East Main Street location in Chicopee. The ceremony marked the official opening of the first medicinal marijuana dispensary in the city.

A. Crane Construction was selected by Mass Alternative Care to complete construction on the location based on their quality work and roots in Chicopee.

Kevin Collins graciously thanked the city of Chicopee for its support during the process of opening the dispensary.

“Because of a solid public partnership with the city of Chicopee and the state of Massachusetts, we would not be here today without the unwavering support of Mayor Kos and his staff. Everyone has worked in collaboration with each other to bring this collaboration to the forefront. Mass Alternative Care pledges to safely fulfill our mission to deliver quality marijuana products.”

In addition to obtaining a license from the Massachusetts Department of Public Health to operate the location, Mass Alternative Care also received a permit and zone change from the Planning Board and City Council.

Kos referenced the importance of alternative medical care in the city of Chicopee during his speech. “The support that you received in this community reflected our understanding and level of compassion that this is an important component to medical treatment going forward.”

Mass Alternative Care is planning to open two additional locations in Massachusetts including Lee and Amherst.

Mass Alternative Care is open to Massachusetts patients and caregivers who hold a valid ID card issued by the Massachusetts Department of Public Health. The card, along with a driver’s license, state-issued ID or passport, must be presented for access to the dispensary.