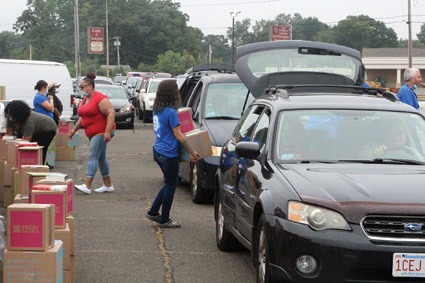 Volunteers carry boxes of food and other goods to the cars of 800 families at the event sponsored by Price Rite Marketplace and Feed the Children in Chicopee last week.
Reminder Publishing photo by G. Michael Dobbs

CHICOPEE – Before 10 a.m. on Sept. 10, there were rows and rows of cars neatly lined up in the Castle of Knights parking lot and onto Memorial Drive. The people driving those cars had been selected to receive boxes of food and other items as part of the “Feeding Minds & Bodies” program, collaboration between Price Rite Marketplace and the national organization Feed the Children.

As Bill Devin, the vice president of operation for the supermarket chain, explained to Reminder Publishing, Chicopee is one of the 10 stops in a campaign that has been happening for the past five years to address food security and more. The supermarket’s area of operation extends as far west as Buffalo, NY, as far south as Baltimore, MD and as far north as locations in New Hampshire, he added. This was the sixth stop in this year’s campaign.

Devin explained that 800 area families had been identified by the Revival Time Evangelistic Center in Springfield to receive a 25-pound box of food; a 15-pound box of hygiene products, including shampoo, conditioner and lotion; a 10-pound box of Avon products; a large bag of non-perishable food from Price Rite; a package of bottled water; and a book for the family.

The effort this year was designed to be contact-less, Devin added. The drivers were directed through a line where volunteers loaded the boxes in open trunks.

Mayor John Vieau noted September is “Defeat Hunger Month,” an effort that involves Feed the Children. Speaking of the food distribution, he said, “It really helps our city.” He added, “It’s an incredible thing.”

Since the inception of its partnership with Feed the Children in 2015, Price Rite Marketplace has donated nearly 2 million pounds of food and essentials.

Joe Allegro, senior director of corporate partnerships for Feed the Children, said that 16 million children in this country go hungry.

State Senator-elect Adam Gomez told the volunteers, “The pandemic has taken a toll on all of our communities.”

Locally, September is “Hunger Action Month for The Food Bank of Western Massachusetts.

In total at this time more than 93,000 people in Western Massachusetts face hunger, according to statistics released by the Food Bank. That number might increase to as high as 127,000 by the end of this year because of the pandemic.

Due to rising unemployment rates, the national food insecurity organization Feeding America estimates an additional 17 million people could become food insecure in 2020 as a result of this crisis, bringing the total to 54 million people.