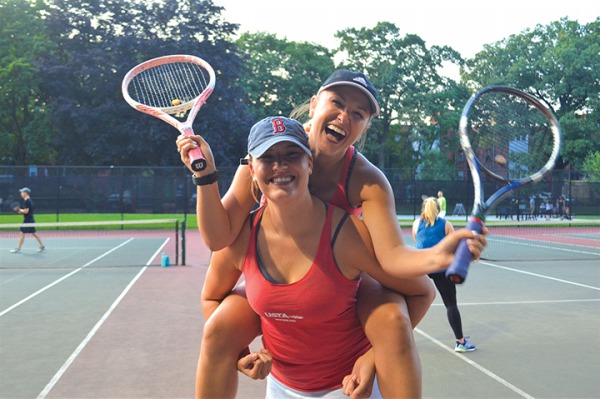 CHICOPEE – The U.S. Tennis Association of New England is expanding their adult recreational league to Chicopee this summer. The league will take place on Wednesdays and run from July 13 to Aug. 24 at Szot Park. Matches begin at 6:45 p.m. and conclude at 8:15 p.m.

The league currently consists of 27 sites throughout New England and features more than 1,500 players. Director of Recreational Programs and Facilities Sarah Wishart shared that the league originated in Brookline during the spring of 2015. Wishart explained that the league’s creation came from a desire to create recreational opportunities after participating in college club tennis leagues.

“We saw a need for a social play opportunity for tennis. Many other sports, flag football, softball and soccer, have these co-ed recreational leagues, and tennis just didn’t have those leagues,” said Wishart in an interview with Reminder Publishing.

The league experienced a prosperous first season that included over 250 participants. After concentrated expansions in the Boston area, the league expanded its reach to various locations like Framingham and New Haven, according to Wishart.

Wishart explained that Chicopee became a location of interest when a local resident reached out to be a site coordinator. The league then worked with the Chicopee Parks and Recreation Department to establish their presence in the Western Mass. area.

“We have been looking for a spot in Western Mass. to expand. When everything aligned, we knew it was the time to try it,” said Wishart. Chicopee marks the second Western Mass. location after the league made its Springfield debut in 2021.

“The initial idea was to have young people come together and get back into tennis or learn how to play for the first time,” said Maimonis in an interview with Reminder Publishing. The league also includes divisions based on ability to ensure fair competition for each participant.

Maimonis said the league serves additional purposes outside of recreational fun. Several players credit the league for providing strong networking opportunities, while other players grew to form lifelong bonds with their peers.

“We’ve had couples that have formed and been married from this league, we’ve had best friends that have been formed…it’s been an outlet for people after work and a great opportunity for transplants from the Boston area,” said Maimonis.

Readers can sign-up or learn more about The U.S. Tennis Association of New England at https://www.usta.com/en/home/play/adult-tennis/programs/newengland/usta-league.html.