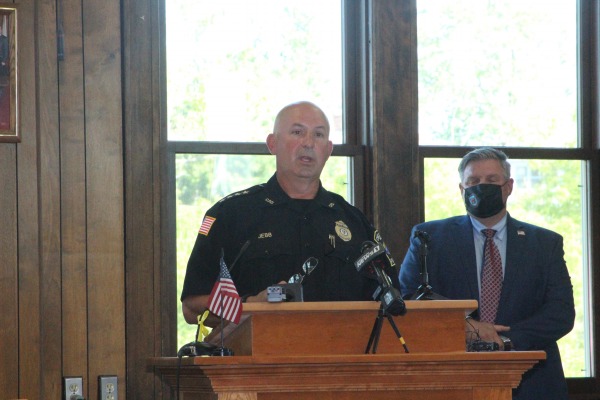 Referring to the murder of George Floyd, which brought on-going civil rights issues to the forefront in the nation, Vieau said, “This did not have to happen. It should not have happened.”

He said the local Black Lives Matter events, including those in Chicopee “moved me.”

He added, “Racism of any kind violates human dignity.”

Chicopee, he added, “welcomes all colors and creeds.”

Vieau and Police Chief Williams Jebb spoke at length about how training is a cornerstone for the Chicopee Police Department (CPD) and Jebb distributed a six-page report about the nature of training initiatives over the past five years.

Vieau said there has been diversity and sensitivity training planned for all city departments.

Jebb said that in a 34-year career with the CPD, rising through the ranks, he recognized the need for added training. He lauded former Mayor Richard Kos for his support of the concept.

“Kos was willing to work with me to embrace training,” Jebb said.

He stressed he has an open door policy and any organization that has issues or suggestions for the department is welcomed to meet with him.

Jebb asserted, “In 34 years I’ve not heard a racist word come out of the mouths of officers.” He said he has received no complaints of racism.

In addressing issues raised by Black Lives Matter, Jebb said that many of the demands are “reasonable” and “many of them we are already doing.” For example, he cited the CPD doesn’t allow chokehold as a means of restraint.

He added, “We’re pretty much in lock-step with much of what they are asking.”

One new initiative is “park and walk.” Jebb explained he wants his officers to get out of their cruisers and introduce themselves to city residents, he said part of the implementation of this policy depends upon COVID-19 restrictions.

In addressing an effort to implement a part of the City Charter that would allow the creation of a police commission – something the city council is considering – Jebb believes the review office that Attorney General Maura Healey is instituting to review any incidence of police violence state-wide would be better.

Concerning Officer Michael Wilk, whom Vieau removed as the CPD’s public information officer, Jebb confirmed that despite remarks made in social media, Wilk has not been reinstated in that role and the investigation into his remarks on Facebook seen by many as inappropriate has not yet concluded.

The remarks made by Vieau and Jebb, brought Health Director Lisa Sanders to tears. When she spoke about the status of COVID-19 in the city, she noted as an African-American who has lived in the city for 24 years, “Overall, the police do a great job.”

Sanders said she was “cautiously optimistic” about the spread of the virus and said the statistics “are going in the right direction.”

Vieau said the estimated reduction of $4 million in revenue due to the pandemic has caused a level-funded budget for the next fiscal year. He said there are no layoffs planned, but his budget depends on still-to-be-determined state funding.

“We’re using our best guess as that’s all you can do,” he explained

The loss of an officer

Jebb said he spoke with a “heavy heart” when he noted the tragic death of Officer Angela Santiago from an off-duty motorcycle accident. He noted her contributions to the department over the past six years, which included duty as a School Resource Officer. A cruiser was parked in front of the public Safety Complex where residents brought flowers in honor of the fallen officer over the weekend.

The following was posted on the CPD’s Facebook page: “Tonight our hearts are hurting. We all are grieving, as we’ve lost a member of our family today. Officer Angela Santiago passed away due to an off duty motorcycle crash in Connecticut. She was a member of our blue family, the Chicopee Police Department family. Angela has been a Police Officer for six years and was currently assigned as the school resource officer at Chicopee High School. We wish to offer our prayers and condolences to her family and let them know that we will always be there for them and we will never forget Angela. May you rest in peace.”

A call to artists

Following the press conference, The Chicopee Cultural Council issued the following call to artists for two mural projects: “The Chicopee Cultural Council affirms without reservation that Black Lives Matter. Our council acknowledges the profound moment we are currently experiencing in this nation. We are being called upon to acknowledge and dismantle the racism, violence, and inequities that exist not only within our society but in our art & cultural sectors as well.

“The Chicopee Cultural Council is committed to confronting systemic racism. Taking our lead from Black, Indigenous, and brown artists, organizations, and communities, and respecting the principle of self-determination, we are committed to decolonization and reconciliation.

“We are committed to improving access to our programs and building principles of equity and diversity throughout our organization at every level to better support meaningful and genuine forms of engagement, through collaboration and co-creation with underserved communities of color.

“The Arts have a significant history of shaping the world. Often rebelling against the status quo, celebrating our diversity of expressions, as well as reaching across divides to mend hearts and move minds forward.

“Today, the Chicopee Cultural Council acknowledges that we must improve how we listen to and serve equity-seeking communities and continue our work to create funding strategies to better serve historically underfunded groups. The Council commits to making our processes and programs more accessible and responsive to the diversity of our city.

“We will listen, reflect, and most importantly learn from those who are leading the way in our sector and work in tandem to make the necessary changes.

“With the full backing of the city of Chicopee, and in honor of this commitment, we will install two murals influenced by the Black Lives Matter movement. One in memoriam of the countless lives lost due to police violence, the other in celebration of the sweeping solidarity this movement has produced.

“Today, we call for local artists, especially Black, Indigenous, and other artists of color to submit their designs for these two murals to ChicopeeCulturalCouncil@yahoo.com.

“Understanding the sensitive nature of these pieces, we will be following up with a brief digital interview for all submitting artists.

“As we report on our continued efforts to uphold these commitments, we welcome feedback on what we’ve achieved and what we can do better. Through collaboration and creation, we will do better.”