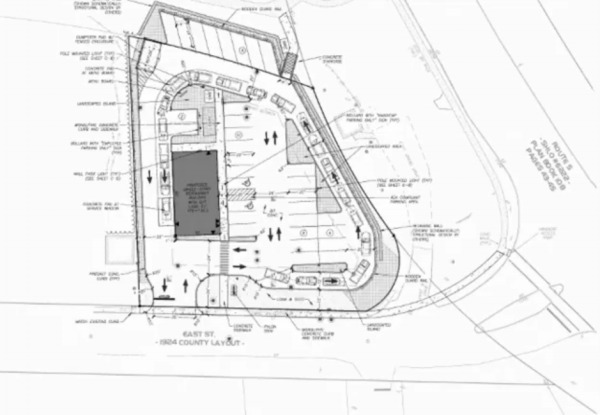 Robert Levesque of R. Levesque Associates presented the plan for a new Dunkin’ restaurant at the corner of East Street and Route 5.
Screen capture from Easthampton Media

EASTHAMPTON – The Planning Board heard a proposal and lengthy feedback from members and residents regarding plans for a new Dunkin’ restaurant at the corner of East Street and Route 5 on July 21.

Speaking on behalf of the applicant, Emanuel Sardinha of American Dream Realty LLC in Westfield, Rob Levesque of R. Levesque and Associates, said the development would include a 1,912-square-foot building with an attached patio. A single traffic entrance and exit would be located at a single curb cut on East Street.

Parking and drive-through areas would be separated with the drive-through lane circling the outer areas of the property. The parking area would meet the 24-car requirement from the city, including two handicap-accessible spots. The dedicated drive-through lane would have a 20-car capacity for those waiting for service and an exit queue with room for three to four cars at one time.

Sardinha said the average time for a car to order and receive food at the drive-through window time was approximately two minutes, but asserted the time is fluid as it is divided between separate ordering and pick-up stations, suggesting it helps prevent extensive backups.

Planning Board Chair Jesse Belcher-Timme said while surrounding parcels are residential, the property in question is zoned highway business. The abutment of conflicting zones, he said, complicates the matter and would likely require more time and effort on the part of the board to make it seamless.

Board member James Zarvis expressed concerns regarding the volume citing disparities between the numbers laid out by Sardinha and the traffic study conducted for the project by McMahon Associates in January. The traffic study, he said, estimated about 80 vehicles hourly with the majority of the traffic being preexisting.

“I find that a difficult concept to parse,” he said, suggesting the firm who conducted the study was "light on the data.”

Levesque said he didn’t agree and Jeff Bandini, transportation project manager for McMahaon Associates said the estimate of 80 trips was “a fairly accurate assessment of what we would expect” based on a comparison with the Institute of Traffic Assessment’s data. He also said the firm adjusted the data gathered in January by 9 percent to account for additional travel in the warmer months. He explained developments such as the one proposed for East Street are strategically placed to take advantage of areas with existing high traffic volumes.

"From that perspective, we don’t expect to see a lot of ‘new trips,’ as the study points out, but we do see a lot of traffic coming in and out of the site,” Bandini said, noting the number of size and layout of the site would allow it to accommodate for delays turning on and off of East Street.

Bandini added the crash rate data gathered and compared to statewide data from the Massachusetts Department of Transportation suggested the intersection in spite of its high volume “fared fairly well.” He said their study also found sufficient visibility when exiting or entering the site.

Both Levesque and Bandini acknowledged there was a suggestion by the city engineer for a peer review of the traffic study. The Planning Board voted to approve the peer review and directed City Planner Jeffrey  Bagg to select and retain a consultant. The cost of the peer review would be absorbed by the applicant.

In addition to the store parking at the center of the property, the proposal includes eight parking spaces and additional bicycle parking on city-owned land that would provide access and parking to visitors of the Manhan Rail Trail, which abuts the proposed development. Levesque noted this was added in response to feedback from city officials. American Dream Realty would absorb the cost of constructing the spaces and would enter into some kind of reciprocal easement agreement to address maintenance.

Bagg noted these parking spots were included in the plan and were “worthy of additional discussion” and was working to arrange a meeting with the Manhan Rail Trail Committee to discuss it further.

Bagg added the city has engaged in reciprocal easements with private property owners in the past, citing areas behind the mills and at the site of the 1 Ferry St. project.

“This is a model that we know can work,” he said, noting an easement would require city council approval.

Improvements to and extension of the sidewalk leading to the crosswalk at the intersection of East Street and Route 5 are also proposed.

Three structures – a house and two garages are currently on the site and the plan is to raze those buildings. Levesque noted the Historical Commission had issued a demolition delay for the house as it has been identified as having historical significance. He added Sardinha has been working with the commission and expects to have their approval.

“Mr. Sardinha is happy to work with them. He has gone so far as to definitely consider the potential for the new building to have some sort of historical characteristics to it,” Levesque said.

Members of the board also expressed a desire to know more about the removal of trees and vegetation associated with the project.

As part of the hearing, Belcher-Timme read a petition as well as a letter submitted by 14 abutters and area neighbors opposing the proposal, raising concerns the timing and accuracy of the traffic study and the potential loss of the ability to use the existing East Street sidewalk, increased litter and a burden on the city and landowners to clean it, the possibility of nuisance parking, standing and loitering, light and noise pollution, loss of mature trees and landscaping, and a degradation of neighborhood aesthetics.

Keely Sexton, an East Street resident who penned both, also spoke at the hearing, stating her family bought their home in hopes of preserving and restoring it and such a development would be detrimental to that end. She also mentioned trash, particularly in the area of the bike path, and the location of the dumpster near her property as potential problems. She also criticized noise and light pollution mitigation proposals for the site as insufficient.

Resident Lauren Simonds said the “traffic concerns are real” and voiced concerns with allowing a franchise a “toehold” in a predominantly residential neighborhood that would create a “creep” down East Street and Route 5.

Several other residents questioned the safety of the traffic flow. Lindsie Alterkun, a resident on East Street, also said she was worried about traffic turning onto East Street and pedestrians crossing at the intersection with Route 5.

Jackie Sienkiewicz, also of East Street, questioned if the traffic study considered the closure of Route 141 over Mount Tom due to inclement weather or when traffic on Interstate 91 is re-routed.

Bandini said it did not as it was difficult to quantify or calculate accurately the frequency of such an occurrence.

In addition to safety concerns related to traffic speed, East Street resident Tom Lautzenheiser said in looking at the plans, the proposal does not work with the nature of the neighborhood.

“What I would say is from looking at the site design … it almost looks like an act of desperation. If there were 10 square feet fewer on the property, this development just wouldn’t work. Being that way, it seems they really maximized every little corner and every radius and so forth,” he said. “I just don’t think it fits with the character of the neighborhood.”

The hearing was continued to Aug. 25 with the expectation of hearing more on the applicant’s signage proposal, tree census and clearing plan, revised light plan, and construction details, as well as comments from the city engineer on the drainage plan and input from the Fire Department.