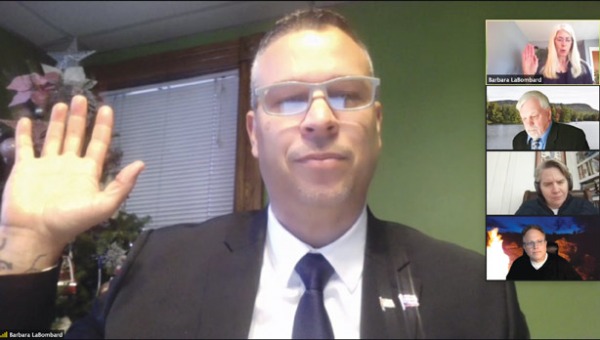 EASTHAMPTON – The Easthampton City Council elected its first Latino president as part of its reorganization on Jan. 3.

Former Council Vice President Dan Rist nominated Homar Gomez, who represents District 2. At-Large Councilor Owen Zaret expressed his pleasure to hear Gomez’s name as the nomination for the position and asked Gomez a question regarding the tempering of close relationships.

“I’ve witnessed personal relationships leak into proceedings of City Council and sometimes come into our deliberations,” Zaret said. “We need to make sure we maintain fairness and don’t allow relationships to influence how we behave and go about business. How will you temper your close relationships?”

“Our constituents know that answer, they’ve elected me three times,” Gomez responded. “I’m fair. For the past 10 years I’ve been a coach and you have to be fair. At the end, it’s what’s best for the team. I will be the best coach for the team.”

Gomez was unanimously approved by his fellow council members and was sworn in as council president. Gomez is now the first Latino council president in the history of Easthampton.
Salem Derby, who was voted and sworn in to become council vice president, had glowing remarks for Gomez.

“As the second most senior incumbent, I’m happy to see Homar step up to this position. He’s shown he has leadership potential and qualities to succeed. I believe he has the knowledge, skills and passion to drive the council forward,” Derby said.

“He has dedicated his life to our public service and in his professional life serves the community of Easthampton when people need him most,” said newly elected Councilor Brad Riley. “I have no doubt he will bring the same level of dedication to our council.”

Following the swearing in of Gomez, Derby was made vice president had a few comments on the council and going forward.

“When I started on City Council there was an interesting group of people and we didn’t necessarily get along all the time and we had heated debate. One thing that always sticked out was we could have spirited, passionate debate and still shake hands and be collegial and we could leave it on the floor,” Derby said. “We live in crazy times where people are not nice to each other and feel like they can say whatever they want to each other. As city council we should hold ourselves to higher standards and be collegial even when we shouldn’t be. I want to make that the norm of Easthampton City Council. It’s the only way we can preserve through these difficult years ahead of us.”

Councilor JP Kwiecinski added that he felt this council could serve as a very dynamic group and that he had goosebumps due to his excitement to be working with this group.

Zaret added his appreciation for his fellow council members and said he was looking forward to the work they would be doing in the coming years.

“We must respect the voters. We have an obligation to the voters and the city. They’re watching us. We’re the leaders of this community and let’s show them how its done,” Zaret said.

That concluded their Jan. 3 meeting, but the council had a quick turnaround and met for their first official meeting on Jan. 5.

Zaret made a few comments on behalf of protecting democracy at the local government level a day before the one-year anniversary of the insurrection at the U.S. Capitol.

“It’s important for us to protect the fabric of democracy which was deeply challenged that day. I’ve been deeply disturbed watching the Northampton discussion on vaccine cards and see so many messages and overtones of anti-Semitism in those messages and it makes me deeply uncomfortable,” Zaret said.

He added that the overtones of racism, white supremacy and anti-Semitism from that day have not left the discourse in government meetings.

“Members who participated in those riots have been elected across the country. We need to safeguard the real values of democracy,” Zaret added.

The council then moved on to a vote to re-affirm their resolution pertaining to discrimination and intolerance but before a vote was made the council made the decision to hold the vote back to the next meeting following some edits to include more inclusive language. Councilor Denham made the suggestion and it was supported by her council members.

Mayor Nicole LaChapelle, who had been sworn in for her next term earlier that day, spoke briefly for her mayor communications portion of the council meetings and said the city was “really up against the numbers with COVID[-19].”

“I know how severe it is when I walk through City Hall and half the staff is out in rotation shifts. I ask the public to keep a quality mask, to get the booster, and to keep testing. That’s what we have to do and unfortunately, we put ourselves in this place,” LaChapelle said.

Most of the items on the agenda under “New Business” were voted to be reviewed by a different town committee and be brought back for public hearing on the council’s next meeting on Jan. 19. The one item the council got out of the way during the meeting was a request to establish a donation account of the Healthy Youth Coalition.

The coalition sits within the city’s Health Department, working with stakeholders from all sectors of the community at the table to promote a culture that will support young people.

Two items of note that will be coming back to the council for public hearing are the supplemental appropriation from Community Preservation Act funds of $42,500 to create designs, cost estimates, and host meetings for a new skate part in town.

The other was a supplemental appropriation from Cannabis of $144,327.29 to supplement grant funding for a public safety IT computer upgrade. These public hearings are set for the council’s Jan. 19 meeting.