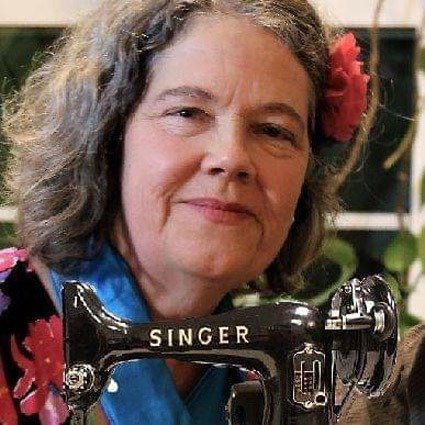 EASTHAMPTON – Resident Lonnie Chu has been making masks and restoring old sewing machines for those who wish to make masks or other personal protective equipment (PPE).

Chu began restoring old sewing machines after her friend Petula Bloomfield, a teacher at Pioneer Valley Performing Arts (PVPA), was down to only three working machines for her classes. She said she asked for donated machines in Facebook groups and NextDoor, and ended up with over 20.

“Most of them only needed a good cleaning and oiling to get them running, and most of them had ended up in her classroom or studio by the time the pandemic hit,” said Chu.

When the need for masks began, she taught her husband David Chu how to sew and he started making masks right alongside her. She got into the craft of sewing when she was a teenager, she made most of her clothes, including some down jackets. The two of them tried many mask styles and landed on one that is adjustable and comfortable. She said the style has received rave reviews from the essential workers who must wear them all day. She has also done custom sizing because everyone’s face, ear placement, and head size is different.

The Chu family made about 200 masks. They donated some to the Western Mask Project while most of them went to essential workers, particularly those providing food such as Big E’s grocery store and Little Truc food truck. She said if she knew someone who needed a mask, she’d get them one or two.

Chu said the need for masks has slowed down because they are available commercially.

After a while, she figured out that she was more attracted to collecting, rehabbing, and re-homing the sewing machines. Chu started to look around for sewing machines, again and again, ended up with over 20.

When she receives them, first, she cleans them to get any smells out, cleans out the bobbin area where most lint and threads get trapped, and then she cleans and oils all of the parts that should be moving with nothing but sewing machine oil. She said she has freed up several machines that were claimed frozen.

“If that did not get them running, I’d bring them to Mark Haney, a kind and skilled technician in Easthampton who has been doing all the more complicated repairs, for free for mask-makers. We could not save them all, but as soon as there was one done, I got it into the hands of whoever was next on my list of people who needed one,” Chu said.

“None of this would have been possible without Dave there to literally do all the heavy lifting, not to mention putting up with a house filling up with sewing machines. The best, most easily repaired machines are old and very heavy, and some of them are not easily removed from the wood cabinet they come in,” she said.

“My aim has shifted a bit to just keeping these great old machines out of landfills and getting them into the hands of anyone who needs one. I'm particularly interested in getting them to children and teens who have someone who can teach them how to sew. But the mask-makers will always come first,” said Chu.

Any masks that they make will be donated through the Western Mask Project or any other organization. Anyone who wants a sewing machine can contact Chu online through https://crimsoncanary.com/contact/. She donates the machines and appreciates a monetary donation of any amount to help defray costs but she said no one is turned away for lack of money.