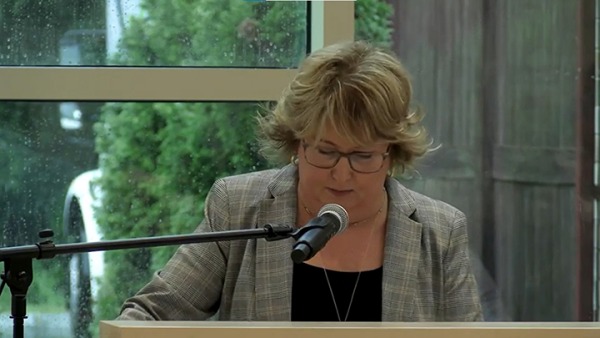 Easthampton Superintendent Allison LeClair was one of many speakers who thanked everyone invovled in the new Mountain View School, which hosted a ribbon cutting on Sept. 6.
Reminder Publishing screenshot courtesy of Easthampton Media

Fifth, sixth, seventh and eighth graders have been attending the new school since January, but Sept. 1 marked the first day for elementary school students, since the wings of the building that housed their classrooms were still under construction throughout the last school year.

The ribbon cutting ceremony was conducted in the middle school café and featured school and city officials, as well as key community members.

“We’re here this morning to celebrate the completion and opening of this beautiful new school and to recognize the efforts to so many that have been critical to the success of this project,” said Tom Brown, chair of the city’s School Building Committee.

“They say it takes a village to raise a child,” School Committee Chairwoman Cynthia Kwiecinski said during the ceremony. “And that is exactly what the city of Easthampton did when they voted for this school.”

The $109 million project was crucial to embark on since the other schools were aging. According to Easthampton Superintendent Allison LeClair, the very first statement of interest for a new school building was filed with the Massachusetts School Building Authority (MSBA) in 2010. The statement was resubmitted and rejected every year until a K-8 project was accepted in 2014. LeClair added that discussions for a news school even began as far back as the late-1990s.

“It’s a perfect time to take a moment and reflect on everything that has been accomplished here, the end result made possible by commitment, hard work and passion of so many,” said Pasquini-Torchia. “Mountain View School represents a shared vision in which our schools are the heartbeat of our community, where all are accepted and able to authentically participate in learning in a setting that is welcoming, inclusive, and adaptive to the needs of all students.”

Other speakers at the ceremony included state Rep. Dan Carey and Jack McCarthy, the deputy chief executive officer and executive director of the Massachusetts School Buliding Authority. Carey said that he graduated from Easthampton High School in 2003 and was a former paraprofessional for White Brook Middle School. He also added that he served on the School Committee, School Building Committee and City Council for Easthampton.