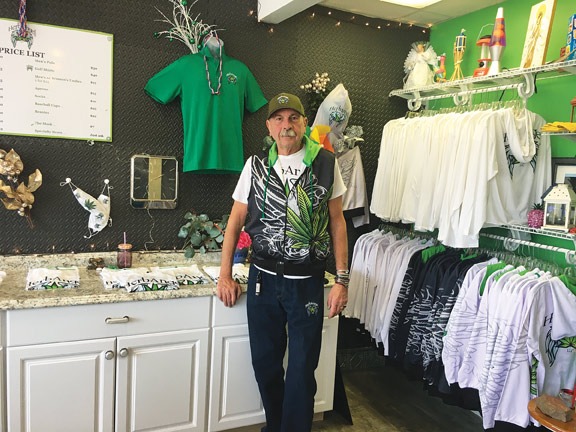 Titled “HerbAngel LLC – Where High Meets Fashion,” the store is owned and run solely by David Routhier, an Easthampton High School graduate who recently returned to the city to begin this business.

The shop sells cannabis-themed apparel with an original, trademarked logo and design. The store itself carries an “industrial-chic” atmosphere, and a “fast-food style” menu board paints the wall with item prices for the apparel.

After being retired for the last several years, Routhier became enamored with the idea of a dispensary and worked at New England Treatment Access (NETA) in Northampton for a year and a half.

"That’s really what led to the start of this business, was my employment at NETA,” said Routhier, who is now 67 years old. He started tending plants with one of his friends in Massachusetts and found that the idea of growing marijuana could be a profitable endeavor.

Routhier said that he is very well connected in the cannabis industry, and when last summer rolled around, the goal was to develop the idea, run seminars in the winter, and officially begin a growing business when the official growing season began in 2021.

“We were going to set ourselves up with 20 grow clients, indoor or outdoor,” said Routhier. “Cannabis is still regarded as sketchy by some people, so I was insistent on keeping everything professional.”

Routhier had a logo designed to be put on uniforms for his staff to wear and to help promote his original idea of a “help you grow your pot” website. After Routhier wore a t-shirt with the logo on it in public, “dozens” of people would ask if he had any on sale.

“After hearing that dozens of times, I had 100 T-shirts made and started handing them out in the parking lot across from NETA,” said Routhier. He eventually started to see people wear the shirts in public.

The owner began displaying prototypes across the valley and had three different vendors competing for his money when he decided to transition into fashion rather than growing marijuana. “I was able to get what I thought was pretty high quality for what I was able to afford to pay for items,” he said.

The name “HerbAngel LLC” is copyrighted and, according to Routhier, about to be trademarked as well. “The transition to fashion has pretty much been a solo shot for me,” said Routhier, who added that there are one or two sentences within the LLC in case Routhier wanted to help with growing in some way. “I think I have a great quality product … I’m smart enough to know that it’s gimmicky.”

Routhier chose the Easthampton location because of his close ties with the city and because rent was cheaper. He is hoping to host a 50-year high school reunion, with the store being used as a headquarters. He is also the only one technically working at the store currently. “This is very full circle for me,” he said. “Easthampton has tried hard, and I appreciate that.”

Routhier began working with an advertisement agency in New York to help him place his logo on T-shirts, hoodies and a bunch of other items Routhier wanted to promote and sell. One of his friends from New York helps with embroidering and mentorship when it comes to the store. He is taking over the production of Routhier’s main line since he has a Canadian supplier that offers quality products for a cheaper price.

The name “HerbAngel” comes from two different inspirations, according to Routhier. It partially came from one of Routhier’s favorite songs-called “Earth Angel” by 1960s band The Penguins. The main inspiration, however, came from his former business partner’s given name, which was Angel. Routhier said that he would not use the name unless his former business partner went into the business with Routhier. His former partner agreed, so the name was copyrighted. The partnership fell through after the fact.

“This is more than just a passion for me,” said Routhier. “I’m going to do everything I can to make sure this succeeds.”

Currently, HerbAngel LLC features 22 copyrighted line items, and each of the individual apparel is copyrighted, as well. “I started out as a web business,” said Routhier. “But I had all of these clothing items in my home, and I really wanted to get my product out there…I wanted a place where people can actually touch and feel my product.”

The owner is also looking to install a mode for ordering online and picking up at the store. He currently has a limited supply of CBD products including gummies, tinctures and more. Paraphernalia will also be added in the future, and Routhier also hopes to extend his line of CBD products.

“The reaction has been very favorable,” said Routhier, when describing how Easthampton feels about the store so far. “I’ve positioned myself so I can sit here comfortably for the next month. That will give me an opportunity to evaluate my success.”

Routhier is starting to promote his apparel to the skater population in the city and defers much of the social media promotion to the younger people around him, especially since-according to Routhier – they know more about what people want in products. The store’s TikTok for example, which is @herbangellc, has 220 followers and more than 13,000 views on their first post.

The store is open Tuesday through Saturday 11 a.m. to 7 p.m., and Sunday 12 p.m. to 5 p.m. It is closed all day on Monday. Routhier hopes to add beach towels and tank tops in the future when he starts to make money consistently. He expects “big things” from the CBD products and will continue to dress people, so his product gets recognized.

“There’s enough people that will buy my stuff,” said Routhier. “It’s just a question of getting them aware that I’m here.”