Still no decision on proposed development on Easthampton's Loudville Road 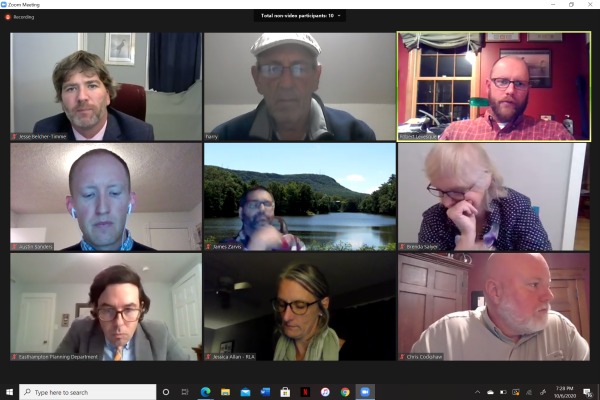 The Planning Board continued its discussions on a proposed Loudville Road development on Oct. 6.
Screen capture by Angelica J. Core

EASTHAMPTON – The Planning Board continued the discussion on the Wildflower Condominiums during the Oct. 6 meeting and again no vote was made.

Since their last meeting on Sept.14, the planning board and employees from R. Levesque Associates walked the grounds of where they would build to show people what they were thinking of doing.

Robert Levesque of R. Levesque Associates, who is representing property owner Cynthia Steplar, said they located the trees that were mentioned to be an issue, have coordinated that work with the shifting of the units, and answered questions related to the architectural character of the proposed units and how they fit into the neighborhood in general.

Levesque said aside from the trees that are where the condominiums will be built, the major trees will be saved, except a dead pine tree that they will probably cut to its base.

Permitting Project Manager Jessica Allan said 80 percent of the site is wooded and they can only work on 31 percent of that land. Their construction plans state that 2.2 percent of the acreage is slated to be cleared so they will be removing a total of 13 percent of total vegetation on site.

“In our opinion, we believe that this style fits in with what is already existing in terms of the style of the architecture, the massing, the roofline, and the square footage of units already on Loudville Road,” said Allan.

A recurring issue that continues to come up during the meetings is the conformity of the condos to the homes in the area. Board Member Brenda Salyer looked at 20 houses across the street and the comparable houses on either side of the applicant which was a total of 16 homes and compared the existing homes with the proposed condos.

Salyer said 78 percent of the homes are less than one and a half story, 64 percent of homes have zero to one garage, and 58 percent are ranches. She believes that it is a false argument to compare a unit to one of the single-family buildings.

She added that the requirement is to compare a building to a building and if they do that and the proposed buildings are 86 by 56, one and a half story or possibly two stories as Levesque indicated in the past. She said the scale to her is way out of wack and they can go up and down the road and add more homes but the homes just get smaller.

“That’s what I think the community is concerned about, is the prevailing character of that neighborhood are really small, single-family homes so I am having a really hard time comparing a building to a building,” Salyer said.

After lengthy conversations on topics such as the spacing between condos, homeowners association, and the problems that may arise because of the slopes and water behind the condos, the Planning Board expressed that they are still uncomfortable with taking a vote.

The board voted to have City Planner Jeffrey Bagg put together a draft decision to have a discussion and figure out if there are conditions that make people more comfortable with this project. They will discuss the draft on Nov. 10.