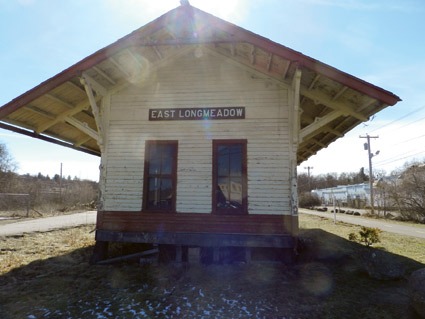 EAST LONGMEADOW – The Community Preservation Committee (CPC) is striving to save a historic landmark in East Longmeadow.

The Train Depot, with its Rail Trail and storied history, has been a fixture in East Longmeadow since it was built in 1877. The building is visible to anyone that drives by its location on Maple Street.

However, a plan in motion by Jay Lefebvre, the owner of the land the Train Depot sits on, to build a mosque could threaten the Train Depot that the town knows and loves, even though the Depot is owned by a second party, Steve Graham.

Another thing that was discussed was procedures needed to take care of the lead paint on the Depot, but this is something that would have to be done for any future use.

This is because in order to have the Train Depot moved, the entire building would have to be closed up and de-leaded of its lead paint, as lead paint was used on the building back in 1877 and according to Zampiceni, flying lead chips during transportation might pose a problem.

Another alternative would be to paint over the existing lead coat with latex paint, creating a seal and leaving the original paint intact.

However, this alternative can only take place if the Train Depot stays in its current location.

At a meeting on March 7, the Community Preservation Committee talked about various ways to also make the area the Train Depot was on more attractive so the area could remain preserved for years to come, just like the building – according to Zampiceni, the building has suffered no water damage or rot despite being almost 150 years old. He added that there are still older records inside the Depot from its heyday as a train station in East Longmeadow. Ideas mentioned at the meeting included an old-fashioned diner, a farmer’s market, or just creating a park that could supplement the existing Rail Trail.

According to the CPC, the Train Depot sits on 3.2 acres of land. Buying the property outright was discussed at the meeting but due to the Depot and the land being worth a large sum of money, it is not certain how this option will pan out. The CPC also noted the possibility of a 20-year-bond to secure the land, but that is not an option they want to visit early.

According to the CPC, the Train Depot has to be “moved by May” or the landmark would possibly have to be destroyed to make room for the mosque.

“The Train Depot is worth whatever you feel history is worth,” said Zampiceni. “That’s the last thing in town.”