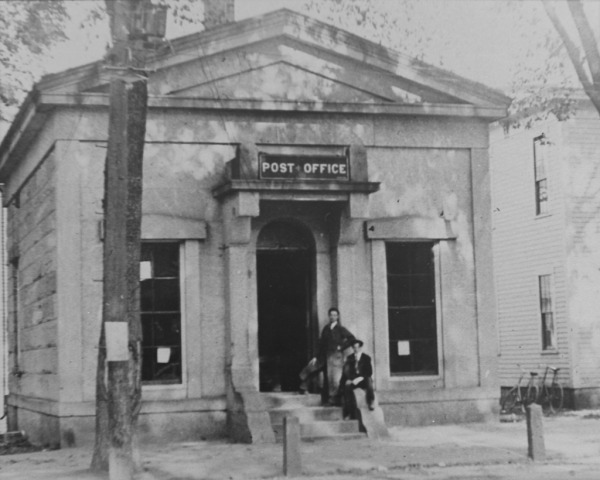 MONSON – Banks often merge or are absorbed by larger financial institutions, but not Monson Savings Bank (MSB). It has remained local and independent for 150 years.

Monson Savings Bank began as a mutual savings bank in 1872 at the corner of Main and State Streets in Monson. At the time, Monson was growing, and the community needed a local place to save money.

In 1998, Monson Savings Bank opened a Hampden branch and began to transition into full commercial bank. That same year Moriarty joined the bank. He became president in 2020 and was named CEO in 2021.

“We felt that we have to remain relevant and that means we have to expand our reach,” said Moriarty, who described himself as “homegrown in Monson.” That reach is both geographical, with locations in Monson, Hampden, Wilbraham, Ware and East Longmeadow, as well as in its diversity of financial opportunities. “We want to still maintain that local bank feel with the big bank products,” he said. Among those products are mobile banking, financial planning, mortgages, commercial lending and home equity loans.

There are now 95 employees and five branches, including their main office in Monson, and a loan and operations center.

Monson Savings Bank will kick off its sesquicentennial anniversary with a “Cheers to 150 Years” event on March 19. This is followed by a 150th Anniversary Week between March 28 and April 2. Throughout the week, Monson Savings Bank has a planned schedule of excitement for customers who visit any MSB branch.

“As a throwback to the Monson Savings Bank Grand Re-Opening event in 1966, the bank will also have ‘Then and Now’ grand prize drawings, with winners being announced at the culmination of anniversary week,” MSB announced in a statement.

Customers will also be automatically entered into a drawing each month between March and December, and an MSB customer will win $150 at the end of each month.

In yet another celebration, commemorative plaques will be unveiled at the original bank building and at the current Monson Savings Bank Monson branch. At that time, a time capsule will be filled with mementos, artifacts and reminders of the year 2022. The capsule will be buried at the Monson branch and be excavated in 2047, at the bank’s 175th anniversary.

Monson Savings Bank has been carrying out a giving campaign to local non-profits and finding ways to participate in its communities.

“Without gaining the trust of our communities we don’t stand a chance of growing,” Moriarty said. This year, the bank plans to increase its community efforts, with a 150th Build a Bike Campaign, in which it will buy $15,000 of children’s bicycles and helmets from the Family Bicycle Shop in East Longmeadow. The bank is partnering with the YMCA of Greater Springfield, the YWCA of Western Massachusetts, I Found Light Against All Odds, Educare Springfield and the South End Community Center (SECC), to assemble the bikes for local children.

MSB will also be a sponsor of the Spirit of Springfield “World’s Largest Pancake Breakfast” on May 14 and host annual shred days among other opportunities.

Monson Saving’s Bank’s plans for the future are simple – “remain mutual and independent for another 150 years,” Moriarty told Reminder Publishing. He said it was important that the business not be beholden to stockholders so that the customers remain their number one concern.

Monson Savings Bank has survived, while many local banks have been bought out or merged into ever-larger corporate financial institutions. Its method for maintaining independence begins with local decisions, Moriarty said.

“We can react to what’s happening quickly,” he said, without having to coordinate with banks across the country. “I can reach out to board members on a moment’s notice.” MSB’s agility means it can stay on top of changes that occur in Western Massachusetts or nationally, without the bureaucracy of an enormous operation.

Another benefit of being local is the bank’s practice of getting back to customers within 12 to 24 hours. Moriarty said teamwork, both between employees and with customers, is an integral part of the MSB culture.