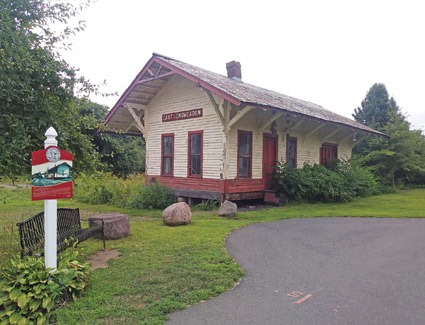 EAST LONGMEADOW – The last train visited the East Longmeadow Train Depot 70 years ago, but people will soon be able to visit the iconic town building for a scoop of their favorite ice cream.

The depot, located at 64 Maple St., sits alongside the Redstone Rail Trail Bike Trail. Owners Steve Graham and Jean Graham foresee people stopping to rest and enjoy a treat while out biking.

“We hope we can turn it into something nice for the town,” Steve said. Eventually, the business may offer coffee and pastries in the morning or lunch. Right now, however, ice cream is the focus.

Built in 1877 as a stop on the passenger line between Springfield and East Hartford, the depot ceased to be necessary when train service ended in 1950. It was used as the Community Feed Store for many years after.

The Grahams bought the historic depot about 10 years ago for roughly $10,000.

“We didn’t want to see it disappear,” Steve said. The couple paid rent for the land it was on until January of this year when they purchased the 2.4 acres of land the structure sits on.

“It really hasn’t changed since the 1880s,” Steve said of the interior of the roughly 800-square-foot building. He said that space will be divided, with half of it used for serving customers and storage, and the other half used as a small seating area.

Steve plans to highlight the building’s history by decorating the interior with framed photos and documents from the depot’s heyday. Before that can be done, however, the building needs renovation, including a new roof and bringing it up to building and health codes.

The Grahams will rebuild the platform around three sides of the building and add an accessible ramp. Steve said he intends to use the existing paved parking spaces, and create an outdoor seating area and a place for young children to play.

He has been in touch with Donald Maki of the television production department at East Longmeadow High School and said he plans to work with high school students to document the renovation and updates to the building.

As of now, Steve hopes to open by the end of June. The hours of operation are expected to be 7 a.m. to 9 p.m. As an ice cream shop, the seasonal business will run from April until the end of September.

Steve admits that he and his wife, who co-own Toner Plastics in East Longmeadow, have no experience running an ice cream shop, but he said with a laugh, “We think people like ice cream.” They plan to hire about four employees and a manager to take control of the day-to-day operations.

Steve has received positive feedback from the community, and residents at the planning board’s Jan. 21 public hearing on the proposed usage of the building spoke in favor of the business. He said, “A number of people have said, ‘Is there anything we can do?’”

The Grahams haven’t picked a name for their shop, yet. Their daughter Alison has set up a Facebook page at facebook.com/thetraindepotEL. Steve said the public can make name suggestions there.

Steve is optimistic about the new venture.

“It’s centrally located. If we landscape it nicely, people can sit down and have an ice cream and watch the world go by,” he said.