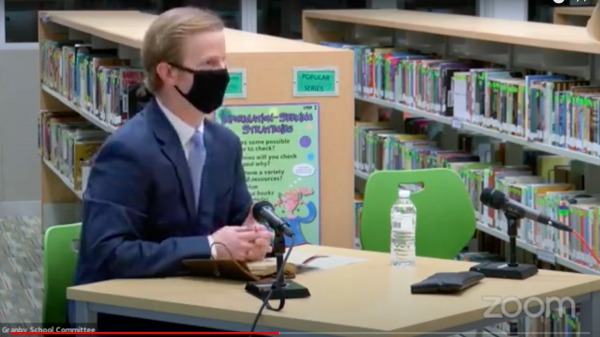 The current principal of the Granby Junior Senior High School, Stephen Sullivan, was selected as the district’s next superintendent during the April 15 School Committee Meeting.
Photo credit: GCAM

The two final candidates for the position of Granby Public Schools superintendent went before the School Committee for a final interview on the evening of April 15 during a School Committee meeting.

The evening started with the committee interviewing candidate Dr. Elizabeth Bienia who currently serves as the principal at the Glickman Elementary School in Springfield. Among the 13 questions asked to each candidate, Bienia was asked how she would ensure that students who failed to meet or exceed learning standards in the district would be supported. She said this was a matter of “looking at what we are providing currently and what is available to us either in the district or out of the district.”

She referenced a sentiment she had shared earlier in the week about “ensuring we would look at online programming,” what local community colleges offered the district and how the district could partner with other organizations. This, she said, would allow the district to “offer things on both ends of the spectrum for students who need and want that.” She added that including vocational students within this would be important as well.

During her response to using student performance data to ensure that the district had the necessary resources Bienia said once trust was built then resources including staff could be “shuffled around” with people who were willing to “do the extra.” This, she said, was a feeling she got following her community listening session earlier in the week. She said she’d heard from staff and administrators who had left her with the impression that their community was tight-knit.

“They were very clear, they are a community themselves and they are very close-knit. That’s one of the things that I just – I left with that feeling that this could be a very beautiful home for me as well because that’s the way I treat my staff now, and that’s something that I’m looking for moving forward as well,” she said. “But it was really beautiful to see how everybody felt that way.”

Bienia was asked about a highly controversial program that she had proposed, something that had divided the School Committee and resulted in a group forming in opposition of the program. She said she hoped that any program that may be proposed that may be controversial that there would be a need or reason for implementing the program within the district. “So I would have done my research as to why we needed it, what it looked like, what it could look like. I would have asked teachers and administrators and families to be on the committee to help me develop the program,” she said.

After a short break, the School Committee returned to interview the final candidate, Stephen Sullivan who is the current principal of the Granby Junior Senior High School. Sullivan was also asked 13 questions, some of which were the same as what was asked of Bienia. In his first question regarding his leadership style, Sullivan said he felt that his style was collaborative and inclusive of others. He said his goal was always to have “shared decision making” and to have a common goal and understanding of how the district is progressing towards such goals.

He then went on to reference the time he had spent working in the district and said he viewed it as a strength to the position. “In terms of strength one thing I bring to the position is I’ve been in the district. I know the people in the district, I’ve been able I think to accomplish some really great things at the Junior Senior High School and it’s not just me, it’s the team over there,” he said. Sullivan referenced the “climate and culture” of the staff and students, which he said he had worked hard to improve and had changed quite a bit in his four years as principal.

When addressing how he would support the needs of students who both fail to meet and exceed the district’s learning standards, he called it a critical, but “one of the most difficult things in any school or district.” He said the district had “dabbled” in dual enrollment classes and allowed students in younger grades to take higher level courses. However, he said, “There’s real opportunity for growth in that place.”

Sullivan said the data would be important moving forward for both students and teachers. He went on to say that in the future they were seeking more opportunities to support such students, including hosting dual enrollment on campus of the Junior Senior High School where Holyoke Community College would teach classes at the Granby school. Additionally, he said while they were required to work with DESE, the district chose to work with the entity to participate in their brand new high school senior internship and education program.

When the committee came together to discuss the two candidates, chairperson Jennifer Bartosz said she felt as though she learned more from the site visit that was done for Sullivan than the one done for Bienia. She, however, emphasized that she was unsure if this was because Sullivan was the internal candidate, but also said that Bienia had scheduled time with students who were elementary aged and she was unsure if they truly understood what they were asking them.

Bartosz then went on to reference the repeated use of the word “stern” from those they met with on Bienia’s site visit. “To me that’s almost like a double edge sword. In some respects I think having someone that is stern could be beneficial and helpful in some ways, but if it’s the most prominent word to use to describe someone, it just gave me pause,” she said. Member Jennifer Mallette said she felt as though the paraprofessionals they met with on Biena’s visit felt “constantly asked to do something,” and gave an example in regard to continuing their education. Mallette said she felt as though some of them felt pushed to do it, despite not wanting to.

Vice Chairperson Stephanie Parent said she was impressed by Sullivan’s ability to build relationships within the community during his time as principal. She went on to say that students had stated that they wanted to have a better relationship with their superintendent and see them more than just at Christmas time and graduation. Mallette said a positive of Bienia’s site visit had been that she had made that effort to get to know her students. Bartosz echoed this and said the families that had spoken on Bienia’s behalf had incredible connections with her and shared stories of her helping them navigate a variety of situations.

Parent also emphasized that administrators had made a point of how young their staff was and how committed they were to the district. She said they had the potential to do a lot of great work over a number of years, and felt that no matter what candidate they chose the community had made clear that they wanted someone in the position for a long time.

The committee then went on to discuss the community listening sessions the candidates had attended with Bartosz stating that she was impressed at the number of survey responses they had received. She said Bienia had received 33 responses while Sullivan had received 78. Parent said she felt as though there were more “mixed reviews” for Bienia, while Sullivan’s responses were “100 percent” positive and encouraged the committee to choose him as the district’s next superintendent. Bartosz said she felt as though Bienia may be a better fit for an urban district as that is what she had grown up at, whereas Granby was more of a rural district.

After a lengthy discussion and summary of the candidates, the committee agreed that both candidates were talented and would be a great choice for the district. “We’re very lucky to be in the predicament that we’re in that we have two phenomenal candidates who I think would both do a great job,” Parent said.

Ultimately, the committee made a motion to nominate Sullivan, pending contract discussion and the acceptance of the job. The motion was passed unanimously. After a brief recess where Bartosz called both candidates to deliver the news, she said Sullivan had accepted the superintendent job pending successful contract negotiations.