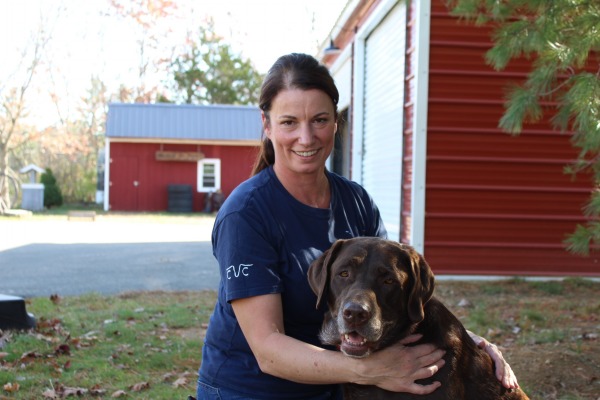 GRANBY –  If you pull up to Charlotte Chartier Cote’s Granby home you’ll be met with a unique sight: Texas longhorn cows.

Cote and her husband, Guy, run Double C Ranch with the help of their five children and her mother. Both her and her husband work full time in addition to managing the ranch, Charlotte in a dental office and Guy at Amherst College. They refer to the ranch lovingly as their “full time hobby.”

The farm has been in her family now for three generations. “This used to be my grandparents farm when my father was a kid, and it means the world to me to bring it back,” she said.

Her whole family is involved in the farm in some way. She explained that her daughter Megan, who is just 20, works for a farm in Hadley and is already making a name for herself in the industry by learning how to breed cows via artificial insemination. This, she said, helps as she’s able to breed her longhorns with other longhorn cows from across the country. “She does that for our cows too, which is a really neat process in the sense that there are Texas longhorn bulls that we would love to breed our cows to, but it’s unrealistic to put the animal through the shipping all the way across the country or to bring the bull here,” she said. “She’s 20, she will be 21 in June and her goal is to make a difference in and a name for herself in the industry. She’s doing pretty good so far.”

Her youngest son, James, she said is also involved and just beginning to learn the different pedigrees of cows. “Our little guy James is very, very much into all the animals. He has quite the chicken collection for himself. And he’s starting to really learn the pedigree of the animals. Different cows will give you a twisted horn, some will give you longer horns. There’s so many different things,” Charlotte said. However, she added that both male and female longhorns have horns.

She said she remembers her very first longhorn cow, a breed that is not commonly found in Massachusetts. “My husband and my father went out on an adventure to Rhode Island and came home with two Texas longhorns, they were not registered. We loved them,” she said.

She explained an unregistered longhorn and compared it to the dog world, where there are mixed breeds and purebred dogs. “A non-registered Texas longhorn, physically you’re not going to see any difference, but it has everything to do with their pedigree and the higher quality pedigree just like you would compare in the dog world,” she said.

Interested in growing their herd of longhorns, she said, her and her father continued to pursue longhorns for sale. In the final months of his life her father became determined to find a longhorn to gift her husband for Christmas. “It was actually a cool/sad story, but we found it on Wednesday. My father was really, really sick and passed after Christmas, which was just six days after we found this cow,” she said. “He really wanted to surprise my husband with this cow. That was the idea. We were going to go and surprise my husband for Christmas.

Not long after, she said the people who were selling the longhorn got back to her. After explaining the story and circumstances that led her to the longhorn they arranged for her to purchase the cow. “That was like a huge, monumental thing for us when that cow came off the trailer. It was so cool,” she said.

That, she said, exposed her to the world of longhorns and has given her lifelong friends across the country. Additionally, she said it introduced her to longhorn beef, which she said is unlike anything she’d had prior to owning the breed. “That really started it, it introduced us into this whole entire group of people that are into longhorn cows, and we tried the beef from their farm and I was instantly sold,” she said. “The flavor is so much different. It has a lot less fat, calories and cholesterol. It’s actually less fat, calories and cholesterol than white chicken breast, so a lot of our customers are really health conscientious people.”

She said while a lot of people think of Texas longhorns and often think that they’re exclusive to Texas and the midwest, that’s a common misconception. She said the breed does well in all parts of the country due to their ability to adapt and their resistance to disease.

“They’re very disease resistant and extremely easy to care for. Whereas, a difference between them and say an angus cow, these guys don’t need much help at all when it comes time to calving,” she said. “When they came to this country, they were a breed that was kept because they were able to go through really long distances of travel with less water, they forage on everything. These ladies like to snack on different things besides just grass where the angus cows are a little bit more picky on their diet.” Overall, she said the cows are “really easy to take care of.”

Charlotte said they aim to keep their herd at “no more than 30 cows,” but in late spring and summer the size of the herd fluctuates due to cows having babies. Six months or so after the calves are weaned from their mothers they’re either sold or added to the herd.

She said it isn’t until a cow is about two or years old that they are considered for meat processing. However, she said the process is different for pulling a female cow from the herd, a process she called culling. “So we would decide to cull a cow if she had challenges giving birth, if she wasn’t really tending to the calf, or producing enough milk or something. We feel like it’d be irresponsible to re-breed that cow so we would probably cull that cow,” she said. “Or in the number one reason a cow would go into our beef program is if it has a really bad attitude. Meaning it’s kind of pushing and shoving other cows around, or I don’t feel safe going into the pasture. That’s usually why a cow goes into our beef program.”

The farm, she explained, only uses USDA inspected facilities, and have been able to maintain production throughout the coronavirus pandemic, something she feels very fortunate for. “We feel pretty fortunate because as we went into COVID, as that hit we were already lined up with our butcher shops to have appointments for the next year and a half. So we were in a really unique situation where it worked out for us,” she said. “We use three different USDA butcher shops, so although some people were impacted by their one butcher slowing down, we felt very fortunate.”

She said while not only were they able to maintain production, they were able to grow their customer base when people turned to shopping local when larger supermarkets ran out of meat early on during the pandemic. “I got a call when I was at a farmer’s market in the Hadley Mall, they have a winter farmer’s market there, and I got a call in March by a few different people all saying ‘are you guys there, do you have any beef left?’And I couldn’t believe, I could not believe that so many people were instantly looking for beef, but they were panicking. They were in the big grocery stores and there was no beef left,” she said. “I think that because people were going through this really scary time with COVID, they like to know where their meat came from and we really enjoy having our customers come here.”

Those interested in more information on Double C Ranch and how to purchase beef from the farm can visit the Double C Ranch Facebook page or visit their website at DoubleCRanchCattle.com.