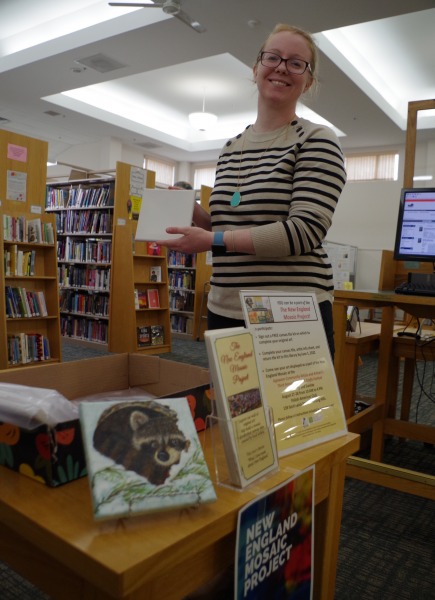 AGAWAM — The Agawam Community Artists and Artisans (ACAA) are inviting everyone to assist in the creation of the first New England Mosaic Project, a planned 8-foot wall canvas depicting New England through a collage of scenes and images.

All are invited to pick up free 6-by-6-inch canvases at local libraries and decorate them however they would like, using whatever media will stick to the canvas. The individual canvases, 144 in all, will be combined this summer to form the mosaic.

When Lever-Duffy moved to Westfield and joined the ACAA, she presented the idea of doing something similar. Soon after, the pandemic hit and forced this idea to the back burner. As COVID-19 emergency measures were lifted, the ACAA decided to do the project this year. Originally, Rossi said they wanted to involve children, but eventually decided to target it to adults. Participants must be of high school age or older.

“We’re getting our feet wet,” Rossi said. “When we get our mosaic off the ground, we propose to have the kids involved next year.”

The ACAA created a team of five individuals that run this project. Each week, they can be found at nearby libraries, handing out canvases to those wishing to partake in the project.

There are no limitations to what artists can put on the canvas, as long as it remains within the theme of what they love about New England, “like a lobster or something,” said Rossi.

Aside from the canvas, art supplies will not be provided. Rossi said any type of art form can fill the canvas — “It’s mixed media.” For instance, Rossi often works with gourds in her art, and will be gluing some to her canvas. Other potential materials could range from traditional paints to objects such as seashells and quilts — as long as it can adhere to the canvas.

Once the canvas is completed, the artist must return it to any of the participating libraries by June 1. The ACAA will then collect the canvases and assemble them into the mosaic. If fewer than 144 canvases are distributed, the mosaic will be smaller, but Rossi said she expects to meet the target. By late last week, Southwick’s library had distributed 15 out of the 20 canvases allotted to it.

The resulting mosaic will be displayed during the ACAA’s third annual Arts and Crafts Festival, on Aug. 27 and 28 at the Polish American Club, 139 Southwick St., Feeding Hills. Festival attendees will be able to buy and bid on individual canvases for $15. All net proceeds will support scholarships for high school students looking to attend a visual arts program.

As the mosaic will be portable, Rossi said once it is assembled, she might arrange for it to be displayed this summer at the participating libraries, or at other community venues, to help promote the festival.

For more information on the New England Mosaic Project, contact Rossi at artistsofagawam@gmail.com or 207-1247.