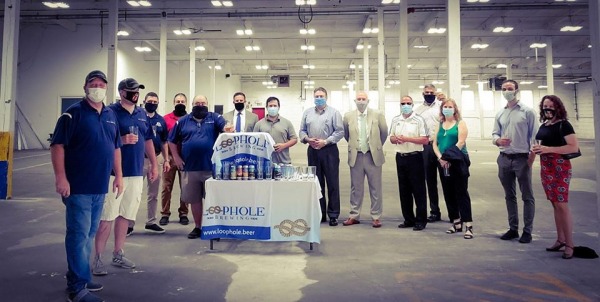 LUDLOW – Another brewery is headed to Ludlow.

After initially planning to build a facility in Holyoke, Loophole Brewing Company recently announced it would become the newest tenant of the Ludlow Mills complex, bringing an innovative, multi-faceted approach to the beermaking industry in Western Massachusetts.

“It was kind of the worst-kept secret in the area,” John Geraci, head brewer for Loophole, joked shortly after the company’s official announcement.

The company will feature a unique approach to the industry.

The company has already begun to roll out its own line of beers crafted by Goulet, an East Longmeadow resident and former head brewer of Amherst Brewing Company. The line includes its First Encounter and Movin’ Thru Kashmir IPAs, Drone, a farmhouse saison brewed with honey, and May the Road Rise up to Meet Ewe, an Irish dry stout brewed in collaboration with Irish beermaker Baronscourt Brewing Company. The company is currently brewing its beer on a contract basis with Castle Island Brewing Company in Norwood. In addition to Massachusetts, distribution of Loophole will begin in Rhode Island on Aug. 1, followed by Connecticut in the fall.

The beer will also be available in the brewery’s taproom and beer garden .

Additionally, Loophole will have a “big piece” of the contract brewing business in the area, Geraci said. What will separate them from other contract facilities is they will allow companies to brew small batches.

“Usually when you look at a company doing contract brewing, you’re usually looking at 30, 40, 50 barrels of beer just to get your foot in the door, which is obviously a lot for some people,” he said. “We’re going to offer anything down to one to five barrels of beer. There’s a lot of interest in that already; there’s a lot of letters of intent and people calling.”

The third piece, also new to the area, is an Aspiring Brewers Program through which homebrewers looking to break into the commercial market can do so. Geraci explained the capital costs involved with getting a brewery started are prohibitive to a number of talented brewers whose products could be successful. The Aspiring Brewers Program is designed to afford brewers the opportunity to brew and package their beer with Loophole’s equipment and they can even have it on tap in the taproom.

“This is for the up-and-coming homebrewers who would love to get in the game,” Geraci said. “With a low monetary investment on their part, it will be a good way for them to gauge the market for their beers.”

He explained the program was not a “brew for hire situation” where someone could brew a couple of kegs of beer for a party. The program, instead, is for those serious about the industry. Applicants will go through an interview process and as part of the service, Loophole will review recipes to ensure their viability.

When asked whether there was a capacity for more up-and-coming brewers and breweries, Geraci said, “I think demand is always going to be there as long as you make quality beer. People like stuff that’s better and the industry has been growing for decades now. People want something that’s different, something that tastes better, something that has more creativity than the mass produced stuff. I think if you have a good product and a good business model, you’ll be OK in this climate.”

Geraci told Reminder Publishing the company had a signed lease to make its home on Whiting Farms Road, but it fell through “for reasons beyond our control” prompting ownership to look elsewhere. The mills, he said, were identified earlier this year as an ideal location.

The town of Ludlow and WestMass Area Development Corporation, which owns the mills, have been willing partners thus far, Geraci noted. WestMass had previously been in a lengthy legal battle with Iron Duke Brewery but the two sides recently came to terms on an extended lease. Geraci opined that new leadership at WestMass had created a change in philosophy that made the Loophole project and Iron Duke’s continued existence at the mills possible.

“They’ve been positive and they’ve been supportive,”?he said. “I think the change in leadership over there has made a world of difference as far as that goes. The change at the top changed how they feel about people like us. They kind of did a 180 and changed their tune.”

Loophole Brewing is owned by a local team of investors – area craft beer legend Jeff “Heffe” Goulet, Aaron Saunders and Todd Snopkowski. Goulet, a Springfield resident, has been active in the craft beer market in the area as is the founder of the Worthy Brewfest, the craft and homebrew festival that takes place annually on Worthington Street in Springfield as well as the beer liaison for Smith’s Billiards. Saunders, of Belchertown is, among other things, a former Ludlow selectman and chief of staff for retired state Sen. Gale Candaras. Snopkowski is the CEO?of Snapchef Culinary Training and Staffing.