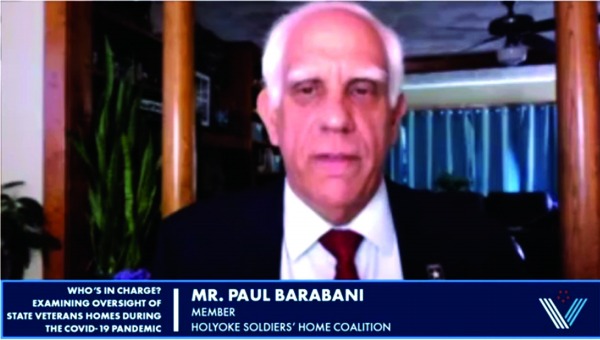 The Commonwealth of Massachusetts operates the home, but the VA inspects it.

Barabani is the head of the Holyoke Soldiers’ Home Coalition, a grassroots group calling for improvements at the Home. He served as the superintendent of the Home from 2011 through 2016 when he resigned.

He explained to House members what his vision of an improved relationship with the VA would entail: “The VA survey would include an analysis of staffing levels in relation to resident complexity, as the critical first step of the annual survey.

“VA would require the Facility of Jurisdiction [a VA medical center] to assist the State Veteran Home with developing corrective action plans; utilizing their expertise, network of data and their vast knowledge of evidence based practices. Recall my mention of the January 2020 finding that the Home lacked an infection control program? Imagine if the Facility of Jurisdiction and the Home had worked collaboratively to implement such a policy during the month of February.

“The results of the State Veteran Homes survey would be added to the performance metrics for the Director of the Facility of Jurisdiction.”

He explained, “A decade ago, in 2010, the Annual VA Survey noted life safety and resident room-size deficiencies. Of the 278 beds at the time, less than 5 percent met VA Standards. We created a design to accommodate 270 residents, with construction of a new wing containing 120 private rooms and renovation of the existing building into private or semi-private rooms, configured in neighborhoods typical of the VA’s Community Living Center model. The VA Construction Grant Program approved this plan in 2013. In 2014, the VA approved our design for an Adult Day Healthcare program at Holyoke.

“It is the Coalition’s belief that the lack of sufficient staff and crowded rooms were root causes of the rapid spread of the virus resulting in the deaths of 76 American heroes.”

He told the representatives, “In 2013, and every year until my retirement in 2016; I needed the VA’s help to influence the state’s decision makers – to provide funds for proper staffing levels, and the renovation of the Home; to ensure safe, quality veteran care.

Barabani was introduced by Congressman Richard Neal, who said, “In March, COVID-19 hit the Holyoke Soldiers’ Home particularly hard – it was one of the first state veterans’ homes to experience a major outbreak. Insufficient staffing and infection control issues resulted in the deaths of 76 veterans.

“In April, the National Guard stepped in to provide extra staffing and other critical details to help stabilize the situation and create a safer environment.

“This shocking outcome led to an independent investigation into the tragedy. Like Mr. Barabani, I welcomed the report Massachusetts Governor Charlie Baker’s Administration released in June that pointed to a clear need for more transparency and accountability. But more detailed reforms are needed. First, the facility needs to maintain the current number of beds and oppose attempts to downsize. Second, a new adult day care facility should also be established on site. And finally, Western Massachusetts needs to have a voice in the discussion about the future of the facility going forward – the conversations cannot just occur in Boston.

“While I wholeheartedly embrace plans to renovate the Soldiers’ Home, it needs to be treated with the same equity as its counterpart in Chelsea.

“This is a seismic chore and I am willing to help provide federal resources so the state can move forward to rebuild the facilities and create a more transparent, healthy environment for our veterans and those who care for them. Last week, after my many conversations with the Administration about securing resources for nursing homes and state veterans’ homes, the Department of Health and Human Services (HHS) announced it would devote $5 billion of the CARES Act funding to long-term care facilities and state veterans’ homes.”

Neal added, “Make no mistake, what’s happening in nursing homes across the country right now is no coincidence – it is the outcome of a longstanding de-regulation campaign the Trump Administration has waged against nursing homes for years. Their policies have exacerbated the already present safety threats to these residents and thousands have died because of it.

“The Administration simply has not done enough to contain the virus and protect both patients and workers.”

In a press conference following the testimony Barabani refused to say if he would have handled the spread of COVD-19 differently at the home that his successor Bennett Walsh. He noted, “Walsh doesn’t control the budget. He has restraints. He couldn’t solve those problems.”

Barabani did speak of the issues with staffing that started during his tenure. The Home has 215 full time staff and 148 part-time staff. Many of the part-time staff work at other facilities. He noted in early 2015 there was a move by the state to eliminate staff through an early retirement program.

“We lost experienced people,” Barabani said. “The culture at the Home changed after that.”

When asked if the Baker Administration is taking the necessary steps to address the problems at the Home, Barabani couldn’t say what the administration is doing, but he said the staffing and leadership issue are “significant challenges.”

He believes that incentives must be put in place to attract new staff. “I have a great concern if they are ready for a second round.”

News reports last week noted of a case of COVID-19 involving a veteran who had already had the disease.

He called for a “sizable capital investment” in the current building.

Barabani challenged why the Chelsea Soldiers Home has more staff and spend more on the care of each veteran.

“We are not on the other side of the pandemic, this is not a time for complacency” Barabani said.

For more information about the coalition, go to www.holyokesoldiershomecoalition.org/