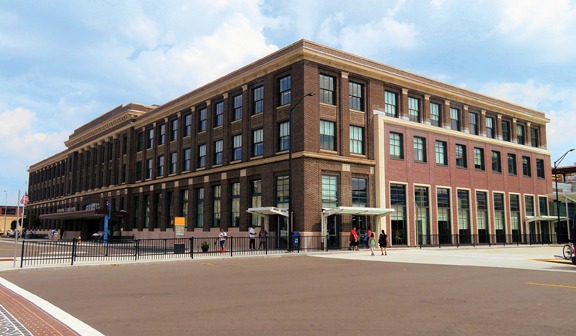 BOSTON – Changes in methodology by MassDOT were presented to more accurately predict ridership of the proposed east-west passenger train service at the meeting on June 10 to update the progress of the study.

State Sen. Eric Lesser believes there is still more information that should be considered, though.

MassDOT is considering three different approaches to establish rail service to connect the western and eastern parts of the Commonwealth. At this time there are two Amtrak trains going through the state – one trip in either direction. MBTA commuter service comes only as far as Worcester.

According to information supplied by MassDOT the study group will use these models as “scenarios to create a range of ridership estimates for each of the final three alternatives studied.”

The six possible plans for east-west rail will be narrowed down to three, and at the meeting the criteria for the consideration was described.

“MassDOT considerations for this narrowing include, but are not limited to: feasibility, ridership, cost effectiveness.

“Ridership refinements will be applied to the final alternatives for further analysis.”

The costs of the six alternatives range from $1.9 billion for a plan to share existing rails to provide trips from Springfield to Worcester to connect to MBTA trains to the creation of a new track for service from Pittsfield to Boston at $24.9 billion, according to MassDOT.

Secretary of Transportation Stephanie Pollack told the State House News Service, “What we learned from this exercise is the methodology we used probably did, in fact, underestimate what the ridership potential is, and we should not use that methodology going forward as we do refined ridership estimates.”

In a written statement Lesser responded, “I want to thank MassDOT for updating their ridership estimates for East-West rail by as much as five times their previous estimate. However, the study continues to leave a lot missing. The ridership estimates remain below where comparable links suggest they should be and where common sense would indicate they would be in a state where middle class families cannot afford to live.

“The MassDOT study still rests on several incorrect assumptions. The study uses as a benchmark ridership numbers on the New Haven-Springfield line. Comparing that CTRail line to  Pittsfield-Boston or Springfield-Boston is driving the estimate lower than it should be. Boston is significantly larger, more expensive, and is growing faster than either New Haven or Hartford. Boston also has a heavily used and well-developed mass transit system to serve as a feeder to an east/west line.

“Further, the induced demand estimates remain too low and lack long-term perspective. If you look at the largest development projects currently underway in Massachusetts, from Riverside in Newton to Hub on Causeway in Boston or the Worcester Red Sox/City Square project, they came years, if not decades, after the initial rail links were established. Springfield, for example, will see better jobs, more housing and more investment for decades after a rail link to Boston is established. The induced demand calculation cannot only be about the opportunity it is creating today or tomorrow, but about the opportunity for growth for years and decades into the future.

“Importantly, the MassDOT estimates completely leave out the benefits of reduced greenhouse gas emissions and environmental impacts. The analysis also does not take into account the urgency of immediate stimulus in the Massachusetts economy. With nearly 1 million people still out of work in our Commonwealth, a project that connects our state by rail would immediately create thousands of new jobs, spur the construction of thousands of units of new housing, and unlock new opportunity for countless families.

“All of this begs the question: how earnestly is MassDOT engaging on this, or is the study being used as a way to kill the project before it even starts? I will continue to work with Secretary Pollack, MassDOT, and the East/West Rail Advisory Panel on refining and improving these estimates and working collaboratively to make East-West rail a reality.”

Anyone who would consider spending $24,900,000,000 on a business that would attract less than 1,000 customers a day, has lost all contact with reality.