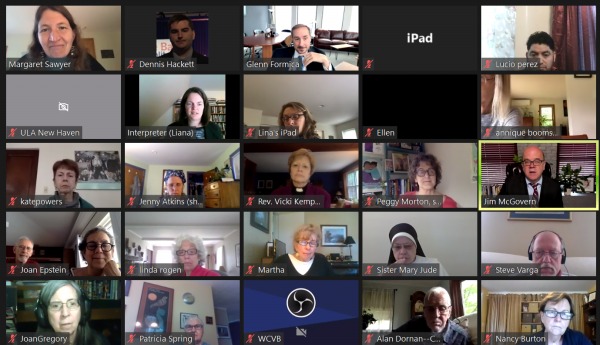 AMHERST – After the United States Supreme Court opened the door for potential immigration law reform with its decision in the Niz-Chavez vs. Garland case, representatives for Lucio Perez, an immigrant who has been in sanctuary in Amherst for over three years, hosted a press conference on June 1 to discuss the decision.

Glenn Formica, Perez’s attorney, said that one of the biggest outcomes of the Niz-Chavez vs. Garland case is that Supreme Court Justice Neil Gorsuch said immigration hearing notices must include the date and time to be considered valid.

Formica said the decision could call into question deportations dating back to 1996.

“What I think is the more important issue that comes out of the Supreme Court’s decision is the question that is now raised. Not only did Supreme Court Justice Gorsuch say that people in Lucio’s position may have a second chance, it also really called into question whether 20 years of deportations are now jurisdictionally invalid,” he said.

With the decision, Formica said President Joe Biden can challenge the deportation process as it stands.

“I think the Biden Administration has an opportunity to take [President Donald] Trump’s appointed Supreme Court justice’s decision at face value and look at passing a regulation that interprets that decision for what we believe it says, which is if you don’t give them the date and time, they have not been deported,” he said.

“This decision gives wind to the backs of many of us who believe that our immigration system is confusing, chaotic and unfair. I think this is a good decision and it creates an opportunity to provide help for countless people who have been treated in a very unjust manner,” he said.

McGovern said the country’s current immigration system is broken and needs to be fixed.

Because of the current makeup of the House and the Senate, McGovern said the time to advocate for reform is within the next year and a half.

“I believe if we are going to do anything with immigration, we have to act within the next year and a half because we have a House that could pass something meaningful, there is a chance in the Senate we can pass something meaningful, and we have a president who will sign it,” he said. “I hope this setup is there for the next hundred years and gets easier, but none of us can guarantee it, so you have to do something now.”

Through a translator, Perez said he was happy he and others could have the opportunity to reopen their deportation cases.

“For me I must thank the judge of the Supreme Court, who will reopen our cases. It seems like politics were not a factor for the judges when they decided what is correct and I am glad you have given me the opportunity for my case to be reopened and for others to have that opportunity as well,” he said.

Rev. Vicki Kamper, the pastor at First Church in Amherst who oversees the sanctuary program, said she has seen the failings of the immigration system through Perez.

“Over the past four years our congregation through Lucio and his family saw up close the inhumanity and injustice of our immigration system. The tide is turning, even conservative people of integrity can see that our system is unfair, and it is time Congress assured the system is fairer and the law is followed,” she said.

Despite the new decision, Formica said Perez’s situation is still in limbo.