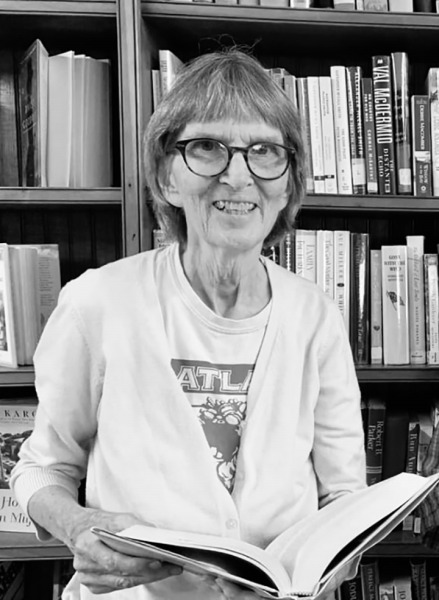 GOSHEN – The much-loved former director of the library, Martha ‘Marty’ Nell Noblick, passed away on Dec. 14. Now, her memory might best be honored by stocking a bird feeder.

Wildlife, history and libraries were Noblick’s passions, Cavacco said. She remembered her benefactor as a peaceful soul who found a home at the Goshen Library. Noblick hired Cavacco about a year ago to help with the library’s adoption of the CWMars catalogue system, a big improvement for patrons looking for hard-to-find books.

“Martha was really looking forward to being able to offer her townspeople…the services they often have to drive distances to get at other libraries,” Cavacco said. “Martha was excited to be moving away from the [coronavirus] pandemic and had been organizing some programming. That was always well received.”

Noblick was 74 years old when she passed on. She still loved being of service to the community, especially children and people looking for the right book. Noblick talked about how so-and-so liked that book, or this is a book someone else liked, to steer word lovers to the next juicy read.

“We’re a very small community, a very small library, and she made it a point to get to know every patron, from the littlest to the oldest, get to know their preferences [and] order books on their behalf,” Dana said. “She would even go across the street, to the senior housing, and knock on doors.”

Summer residents are often an overlooked population. Noblick knew that many parents, vacationing with the kids, still needed to entertain them. She kept VHS movies on the shelves long after DVDs came into use, specifically for those desperate summer parents with older equipment.

Cavacco recalled how Noblick, a Deerfield resident, once adopted an injured starling for three months, until it healed and could return to the wild. In the same way, Noblick nurtured the love of nature among Goshen kids. She often developed a one-to-one personal connection with little ones before sending them back out into the world.

“The kids would come in and she would brighten right up,” Cavacco recalled. “She really engaged with the personal relationships [and] loved sharing books with the kids, sharing her passion for the natural world with them.”

Noblick found her passion for nature early in life. She earned a degree in natural resources in 1971. In 1984, she graduated from the University of Massachusetts with a history degree and, some time later, a masters degree in library science from Southern Connecticut State University.

Noblick worked in the special collections department at the Jones Library, in Amherst, and at Historic Deerfield Library for 23 years, until 2020. Marty, as Noblick was affectionately called, was the library director at the Goshen Public Library from 2013 until last December.

Dana, a local teacher, recalled a visit by a friend and her daughter. Noblick and the girl hit it off “like a house on fire” and spent hours chatting about their favorite books as they culled the library stacks to make room for new releases. The next year, Noblick’s new friend came back just to visit her.

The current chair of the Library Trustees, Andrew Watt, wished he knew Noblick longer. He appreciated the intellectual side of Noblick’s work at the library.

“The thing that appealed to me most was her insights into life and the environment, fueled by a decades-long dedication to scholarship,” Watt wrote in an email. “There was a light of inner wisdom in her, that displayed itself as a deep kindness and compassion.”

The Library Trustees announced Noblick’s death in this month’s town newsletter by recounting the role she played in nurturing the musicianship of 8-year-old Eloise Dagmar. Noblick introduced the budding musician to the latest books on music and musicians. The mentorship culminated, last August, when Noblick arranged for Dagmar and her mother to play a program of Broadway songs at the library.

At the end of the concert, when the applause for Noblick’s efforts ended, she said a simple thank you to the community she had served. Watt felt the community was lucky to have her as long as it did. Dana agreed.

“It’s a shock for us, that she’s gone so quickly,” Dana said. “She really was quite beloved. It’s not just that we lost our librarian…this is a very personal loss for us.”

According to published obituaries, a sympathy tree can be purchased in remembrance of Noblick at the website for Kostanski Funeral Home.