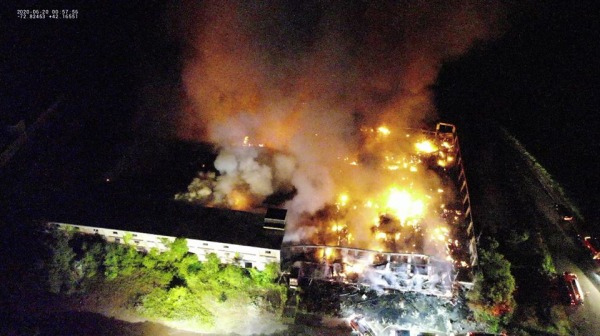 HILLTOWNS – One of the many units that responded to the Strathmore Paper Mill 2 fire in Woronoco on Saturday evening was the Huntington Emergency Management, which brought the Mobile Command Pod to establish a command post for monitoring radio traffic and assisting logistical requests, accountability and situational awareness, and to operate the Huntington drone.

The drone is used in conjunction with the Mobile Command Pod, a regional emergency operations center housed in Huntington, that can be brought by trailer on-site and patch together local police, fire, highway and EMS radio dispatch signals, and show video from the drone on its screens. The command pod was purchased in 2018 by a grant from the Western Region Homeland Security Advisory Council with funds received from the U.S. Department of Homeland Security.

Emergency Management Director Dennis Nazzaro said they were on scene at the start of the fire on Friday evening through 3 a.m. Saturday, and were able to patch the radios from five departments through the Command Pod for better communication for incident commander Russell Fire Chief Niles Lavalley and the fire departments from Chester, Huntington, Blandford, and Montgomery, who were running the fire scene together.

The drone was deployed for multiple missions throughout the night and morning. A live video from the drone was shown in the command post side by side with a downloaded view from Google Earth, so tactical decisions could be made with a birds eye view, including how the fire was changing from the direction of the smoke. The drone was also used for Massachusetts State Police, Fire Investigators and Massachusetts Department of Fire Services Hazardous Materials Team missions on scene.

“There were a lot of different parts, different numbers of floors, It was a very large building.  We had the photo from Google Earth, and the drone video of the other side of the building on fire, which was very helpful for the incident commander to see,” Nazzaro said.

The Command Pod also ran accountability, “making sure we knew who was there,” and logistics, arranging for portable toilets, food and drinks.  Nazzaro said the Hilltown Community Ambulance was also present for medical monitoring of firefighters.

Hazmat did the air monitoring, checking the interior operations air packs and checking outside to make sure it was safe for the firefighters, according to Nazzaro.

The train tracks were right there behind the fire, and representatives from CSX also came down to coordinate with the train schedule, and ensure the safety of the onlookers and reporters who were standing on the track.

Nazzaro said it was a very difficult access to the mill over a one lane bridge that the heavier truck, including the ladder truck, couldn’t cross.  Also, with one small fire hydrant at the mill, they had to shuttle water over the bridge.  Onlookers who attempted to drive down added to the traffic on the one-lane bridge.

“It was a long, hot, hard night with a lot of complications, but we were able to make it work,” Nazzaro said, adding that everyone, including the multiple Fire, Police, EMS and Dispatch agencies worked throughout the night to contain the large mill fire. “A job well done by all involved,” Nazzaro said.

Jennifer Mieth, public information officer for the Department of Fire Services has announced that investigators are asking for the public’s help with the fire in the vacant mill at 34 Valley View Avenue in Russell.

“The fire is considered suspicious. Anyone with information about this fire is asked to call the Arson Hotline at 1-800-682-9229. All calls are confidential. The Hotline is part of the Arson Watch Reward Program that provides rewards of up to $5,000 for information that helps to solve the case. The Arson Watch Reward Program is funded by the property and casualty insurance companies of Massachusetts.

“The fire is being jointly investigated by the Russell Fire and Police Departments and State Police assigned to the Office of the State Fire Marshal. Additional agencies are assisting,” wrote Mieth.