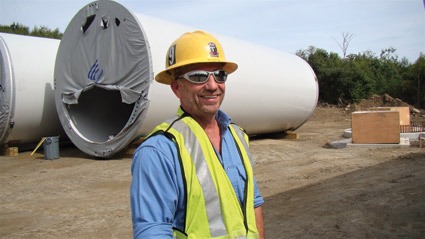 RUSSELL – A lot of excitement was generated as three massive turbine blades arrived in Russell via Westfield on the afternoon of Sept. 4.

Each blade arrived on its own tractor trailer bed, causing a bit of traffic backup on Westfield’s Western Avenue and Route 20, before navigating the turn at Pine Hill Road to its destination at the site of the north wind turbine for the Holiday Hill Community Wind Project.

Both turbines are located on a 275-acre parcel owned by the Stewart family estate. The project has a 20-year lease for 100 acres of the parcel, the area to the farthest west and north, with an elevation of 1,180 feet. The tower height will be 295 feet, and to the tip of the blade a total of 475 feet.  The blades have a 350-foot diameter sweep.

“The Stewart family didn’t want it developed. This is a way to
preserve it, and keep it in the family,” said Russell Municipal Light Department General Manager Alan Robinson.

The wind project represents an 11-year effort by Robinson, started on a $55,000 grant from Mass Clean Energy for a feasibility study.  Working with VERA Renewables out of Vermont, the town of Russell created a wind bylaw in 2009, and the project received a permit.

Right after the permitting, the economic picture changed, and the project stalled.  “We had just done the wind bylaw in Russell. Wholesale prices were eight to nine cents; soon afterwards they collapsed to three to four cents. It wasn’t going to be economically viable,” Robinson said.

Then four years ago David Blittersdorf, a private developer of
solar and wind power in Vermont, was able to obtain power purchase agreements with the Russell Municipal Light, Chicopee Electric Light and Westfield Gas & Electric, which allowed the project to continue forward into its current construction phase.

“Alan (Robinson) had already gotten it permitted, and found the site,” Blittersdorf said last week. He put up another higher wind monitor to confirm the results of an earlier one erected by the University of Massachusetts and proceeded where the project had left off.

Blittersdorf said he did face another hurdle soon afterwards, when President Donald Trump took office and imposed tariffs that weren’t in the $15 million project budget.

“It was a big hit, but I had to build it,” Blittersdorf said of the 25 percent import tariff on some of the parts made in China, including the blades, generator and nasale.

“At this point we’ve just got to get it done. It’s good for the people of Russell, Westfield, and Chicopee, and it’s one of the few wind projects getting done in Massachusetts,” Blittersdorf said.

Robinson said the cost of the power will be a little bit more expensive than the wholesale power market, but it will be levelized for the next 25 years and give Russell Municipal Light more renewable energy.  The power purchased from the wind turbines will comprise 20 percent of the town’s energy portfolio and qualifies for the forward capacity market, he said.

The town of Russell recently entered into a payment in lieu of taxes (PILOT) agreement with the company for an estimated $50,000 per year for the next 20 years.

“This is the first wind project to my knowledge in Hampden County,” Robinson said.

Robinson became even more enthusiastic when he spoke of all
of the local companies and union workers that were hired by contractors Diversified Infrastructure Services (DIS) and Baldwin Energy to work on the project, which began in December, 2017.

He rattled off a list of local companies, beginning with White
Wolf Trucking out of Washington, MA that provided the portable toilets. Cooper Excavating in Blandford did the initial 1,100 feet access road, with David Hass Logging out of Southwick also working the site.

JL Raymakers & Sons in Westfield built the access road and did the work on Pine Hill Road, widening the curves to allow the tractor trailers to navigate the road. Robinson said most of the retention roads had to be blasted by Baystate Blasters in Ludlow, but the materials were reprocessed to build the road on the site.

Elm Electric in Westfield did the electrical work. Henshaw Well
Drilling, out of West Chesterfield, drilled for wells on both the north and south sites.

Chicopee Concrete and Westfield Concrete are both working at
the site. Baldwin Energy out of Wilmington, MA is operating the crane that has been visible from points in Russell and Huntington.

STX transportation out of New York hauled the blades and the towers. Robinson said they came into the New Bedford Port,
which was built specially to receive wind turbines by Mass Clean Energy, who give Russell the original grant to do the feasibility study. When the blades were picked up last week, hundreds of people applauded, according to Robinson.

Robinson, an Air Force veteran, said they initially tried to keep track of all the veterans on the job.  He said all the service branches were represented, and he met veterans from the Air Force, Army, Marines and Coast Guard.     “Almost every guy I met here was a veteran,” he said, adding that they also had a woman steel worker out of Springfield Union Hall on the job.

The Russell Municipal Light Department and Chester Electric Light built the distribution line, which will be connected to the ISO New England grid on the bottom of Pine Hill Road. They have also been working with Eversource.

“It was a long haul. I think we did a good job, and I’m looking forward to generating some wind power,” Robinson said, adding, “No one can say I’m a quitter.”