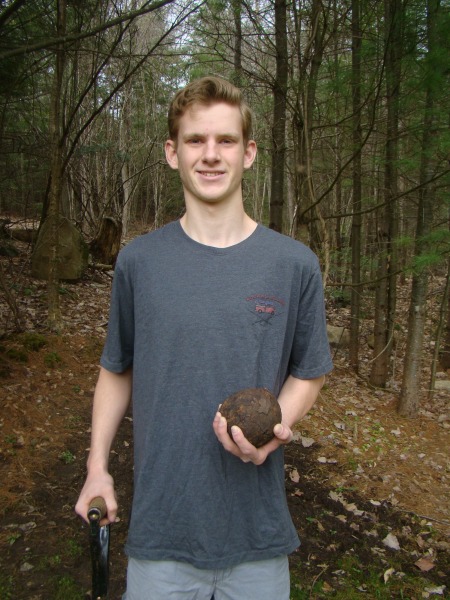 RUSSELL – During school vacation week, Zackary Cernak, 18, was clearing a trail in the woods for his dirt bike on private property in the Dickinson Hill Road area, when he came upon some rocks he wanted to move. One stood out. What looked to him like a deteriorating softball, was much heavier than the rest. “I thought it was a cannonball. I wasn’t sure,”  he said.

Bringing it inside, Cernak, a senior at Westfield Technical Academy in Auto Repair and his brother Nickolas Cernak, 17, a junior in Horticulture, started researching the object on the internet, and comparing it to photos of Revolutionary-era cannonballs.  They also weighed it at 8.3 pounds, and were pretty sure that’s what they found.

When their parents, Jessica Cernak and Efrain Flores, Jr. came home, the excitement over the discovery started to build.

Flores said the property is less than a mile from the Knox Trail, over which Henry Knox carried confiscated cannons from Fort Ticonderoga to Boston for General George Washington.  Knox carried 56 cannons weighing 62 tons to Dorchester Heights on carts. “Knox was 25 at the time,” Flores said, adding, “According to Knox’s diary, once they readied (reached) Westfield, they found a tavern and got very spirited.”

Flores said the family believes the cannonball, which is made out of solid iron, may have rolled off or been fired.

Jessica Cernak and Flores consulted with local historian Thomas Ragusa of East Otis, who agreed that it was “a rare find,” adding that it is the only cannonball he knows of to be found in the hilltowns.  He also said he was surprised it was not buried.

“There is some evidence of an old campsite, several fire rings. Also the cannonball was found almost above ground. Some of the other ones I’ve looked at in New Hampshire were found about 3 feet below ground, which is about right. That cannonball should have been 2 feet below ground,” Ragusa said.

“How it got there, that’s another story,” Ragusa said. He said Henry Knox had no munitions on the trek, only cannons and mortars.  He said it could be British, as the trail was used by British Commander Jeffery Amherst in 1758. “There’s going to be a lot of work done on the actual site to try to find the history, and a lot of work to be done with the cannonball, trying to pin it down as British or American,” he said.

Ragusa said the Knox Trail was the only road to the West, used earlier by Native Americans. He said the trail varied at times, such as when a tree fell.  “There were at least 28 names of the road over the last 250 years,” he said, calling it the 18th century Mass Pike.

Jessica Cernak said they will continue to research the cannonball, and said a Boston museum wants to look at it.  Meanwhile she said the best part is that her son’s name will be attached to the 250-year-old historical find.

“I guess it was kind of cool,” Zackary Cernak said. “I find a lot of junk in the woods.”