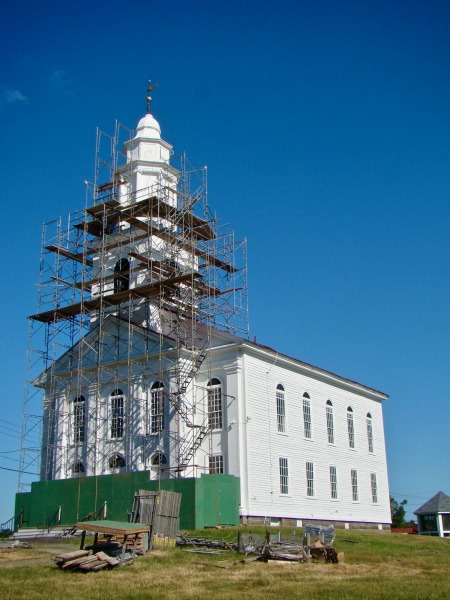 Scaffolding is up for renovation of The White Church in Blandford.
Reminder Publishing photo by Amy Porter

BLANDFORD – Pliny “Chips” Norcross, president of the Blandford Historical Society has announced a $95,000 matching grant from the Mass Cultural Council Capital Fund for a full restoration of The White Church, located at 4 North St. in Blandford.

The iconic building, built in 1882, serves as a cultural center for the town, holding concerts ranging from 25 years of the Bel Canto Opera to a 100 voice Mennonite choral sing, as well as serving as a site for weddings and other private celebrations.

Norcross said the Historical Society has been raising money for the continued preservation of the building for the past 25 years.  “We were well equipped to apply for a matching grant for a major restoration,” he said.  Applying in January, they learned in May that they had been awarded the $95,000 matching grant, plus another $7,000 for replacement of mechanicals.  He said by the time it’s done, the project will cost a quarter of a million dollars.

The scaffolding is now up around the steeple.  Norcross said they have to replace a little bit of roof halfway up the steeple, plus make other carpentry repairs. The entire exterior will receive a treatment, and all the windows will be removed, four at a time, to be reglazed and rebuilt. “Everything is a matter of restoration,” he said.

Since the summer series has been cancelled, the work may be done without interruption. “As sad as the timeout summer with the coronavirus is, it certainly is happening at a time that is convenient for us,” Norcross said.

Preservationist Peter Hamm of Wales, who has been working on the restoration since the 90’s, is coordinating the effort. Norcross said the renovation should be done by the end of the summer.

“We have the money, and we’re moving forward. The steeple should be finished hopefully in two months. We’re also going to be painting and refurbishing inside.  It will be in terrific shape,” he said, adding that one of the motivating factors for doing the project now is that 2022 will be the 200th anniversary of the building of the church in 1822 by Northampton architect Isaac Damon.

The Blandford Historical Society gained ownership of The White Church in 2006, when the local congregation was having difficulty funding the continued restoration. Norcross said back in 1985, the foundation was “kicking in,” and the congregation got it jacked up on steel beams, where it sat for  years, unable to be used. He said the church has another building in the center of town, and the congregation is still active.

“Now anybody who wishes to may use the church.  It’s available to all kinds of groups.  The Mennonites have had major concerts there after Labor Day, with singers from all over the western hemisphere, then take it on a ten-day road trip up and down the eastern seaboard, with the first stop at the 9-11 Memorial. People can rent the church for weddings, funerals, memorial services, and concert series. It’s an actively used facility. The local congregation uses it for concerts,” Norcross said.

The White Church is taking reservations for weddings and other celebrations for the future.  Norcross said it is not a heated building, and their season goes from May to the end of September. “For anybody who’s contemplating a wedding, it’s a wonderful venue. The acoustics inside are fantastic,” he said, adding that the Blandford Country Club, which has new owners, is right down the road.  More information may be found at www.thewhitechurch.org.

One event they are contemplating holding this year is the Bel Canto Opera on the last weekend in August, perhaps as a virtual concert online. Blandford summer resident Eve Queler, an internationally renowned conductor, is the founder and music director emerita of the Opera Orchestra of New York. In 2010, Queler received the National Endowment for the Arts Lifetime Achievement award  Queler has annually brought rising opera stars for the Bel Canto Opera concert series at The White Church, which celebrated 25 years in 2019, and has raised “a huge amount of money,” Norcross said.

“We have more than enough to cover the cost of the matching grant of $95,000. There’s no question that we’re in great shape through the efforts of the last 20 years, to do what it was meant to do. All the money is in the preservation fund, and that’s what it’s for,” Norcross said.

The Historical Society is deeply appreciative for the application support given to this project by the Blandford Select Board, State Rep. Smitty Pignatelli, Blandford’s First Congregational Church, the Porter Memorial Library, as well as individuals who have used the facility for other purposes.