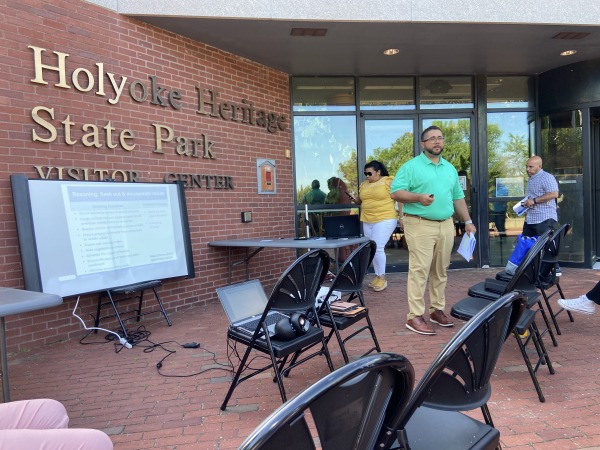 HOLYOKE – The Holyoke Public Schools (HPS) hosted an in-person event on June 8 at Heritage State Park to cap off the three scheduled community conversations between the district, teachers and families on the ongoing strategic planning and rezoning initiatives.

Joining parents of HPS students was Superintendent/Receiver Anthony Soto, who spoke and discussed with parents the school’s plans. Soto encouraged as much feedback as possible from parents who attended as he said he wanted this process to be transparent and for the community to deliver a message of what they want to see through strategic planning and rezoning.

Soto shared the latest draft of the HPS three-year strategic plan at the latest “Moving Forward” meeting and wished for those in attendance of the meeting to review it and give feedback to the members of the school community present for the meeting on both the strategic planning process and rezoning.

One parent said her hope was to get students consistency in grade levels and schools. Currently, there are 11 different schools with nine different grade configurations. Another parent said they hope to see improvements within the district to get Holyoke out of state receivership for the schools.
Soto said he hopes that parents and the district can continue this collaborative process to get feedback and plan the future of Holyoke schools.

“One thing that we did this year that I feel worked really well is we really made a concerted effort to get feedback on planning for our future,” Soto said. “I was very much inspired by how many people were willing to give feedback and I was really adamant that I want to put a plan together that reflects a collaborative effort from this community, not an Anthony Soto plan.”

According to the school district, previously identified strategic priorities are centered around each school having the resources, support and focus needed to develop and implement a highly effective school improvement plan. A goal within the strategic priorities identified for teaching and learning is to dramatically increase reading, math and science proficiency for all students.

Soto added through extensive work and effort made to be in the classrooms and see issues that could be addressed through the new strategic plan had helped a great deal in establishing the plan. The latest draft handed out at the meeting identified priorities for the district.

The first item listed on the plan is for equity commitments and promises about the school culture and atmosphere the schools look to create. The plan also identifies the core values and beliefs of the district that include students being at the center of the education, school being a joyful place of discovery, support and belonging, and creating trusting relationships that lead to successful partnerships.

The priorities established were focused on early literacy, learning experiences, inclusion and educator development. The HPS have recently identified major struggles of students K-3 in falling behind the early literacy line. They are currently working on creating and implementing an early literacy plan to help these students improve their early literacy skills as the district has already established the importance of early literacy in building the foundation of successful students.

The strategic plan draft also outlined goals for the district, including getting high school graduation rates to 85 percent, all schools making substantial progress through the Department of Education and Secondary Education’s (DESE) accountability system and 85 percent teacher and staff retention.

Soto said all this effort is done to bring the community together in improving the HPS district and to not leave any voices unheard. He shared a new slogan for this work, calling it “juntas podemos” or, together we can.

The superintendent then showed a video of different HPS staff speaking on the strategic planning process before showing a second video that was the same idea, just focused on the rezoning of schools.

“Many people I hear from today, students, family, staff, school committee, community members, they all agree that it would be great and better to return to separate elementary and middle schools,” Soto said.

Soto noted that he felt this change over 20 years ago in the zoning of schools has contributed to the HPS being placed in receivership.

He added that the move years ago was driven by a desire to save money on transportation costs, but there was not enough consideration in the educational impact it would have.

“While K-8 schools can work in some context, they haven’t worked well here in Holyoke,” Soto said. “Our K-8 schools have caused us to be operationally inefficient and have lessened the quality of education we can provide to our students.”

In the video on the rezoning process, Mayor Joshua Garcia, who also serves as chair of the School Committee, shared that establishing in a new middle school will help with the rezoning of schools but that they could not wait until 2026, the earliest estimated construction of a new school building if they city were to approve it.

Garcia added rezoning would also improve the balancing of resources across the city for students as some school buildings have been better equipped for certain curriculum than others.

“Sometimes there aren’t enough resources for every child to have access to programs like art, or music or the additional support they need in reading or math,” Garcia said. “I recognize that the work is going to be difficult, but this is urgent and essential if we really want to give every child the education they deserve.”

The rezoning of schools will go into effect in fall 2023 while the strategic plan is planned to be incorporated starting this coming fall.

In closing of the meeting, Soto asked those in attendance to share what values they want to commit to for this planning process. The sperintendent said for him, the top priority is making sure there is balance in student demographics.

Soto said he wants to avoid any situation within the schools that had a poor balance of the cities demographics to create a more equal school experience across the board. One parent echoed a similar sentiment and added that if resources and space were more evenly distributed it would help education in the city. Another parent said it was important for her to have the demographics of staff match that of the students.

The superintendent and his team have now conducted three community conversations and will head into the summer finalizing the strategic plan with the feedback given, as well as continue working towards the eventual rezoning of schools all in hopes to help improve the HPS district.