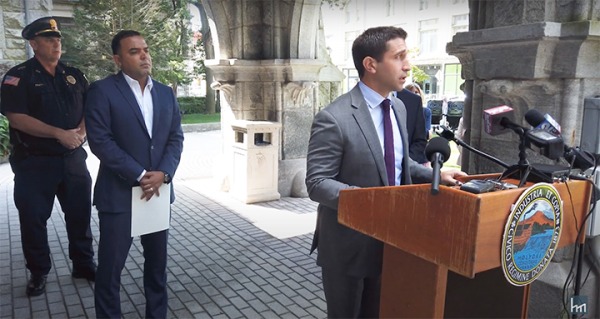 HOLYOKE – Mayor Joshua Garcia was joined by Hampden County District Attorney Anthony Gulluni on Sept. 8 for a press conference outside of City Hall to discuss a recent uptick in public safety issues.

According to Gulluni, there have now been five murders in Holyoke this year with the most recent coming the night before the press conference. Gulluni called this recent uptick in homicides “the high side of average” and added three of the murders took place in July, while the most recent two both happened in September.

“These homicides involving firearms have shaken up our sense of safety in the city of Holyoke and I thought it’d be important to do this press conference to reassure the public safety,” Garcia said.

Garcia added he has always taken pride in Holyoke for being a place of hope and opportunity, but work with partnered organizations and investments to the proper programs and resources were the best approaches to minimize criminal behavior.

“Our common aim is not only bringing lawbreakers to justice, which we do well, but ensuring our community strives for a just society where addiction and mental health illness and other contributors toward social determinate of health are addressed with compassion, consistency and the interests of creating a safer and more humane Holyoke,” Garcia said.

Gulluni shared at the time of the conference that four of the five murders have resulted in a suspect’s arrest. The most recent incident on Sept. 7 was still under investigation and the victim’s the time, according to the district attorney. He added his office had already began making “significant progress” on the case.

“I commend Holyoke Police Department [HPD] and their detectives, the Massachusetts State Police and members of my office who team up to work collaboratively to make sure that justice is brought to the city of Holyoke but also for a victim that has lost his or her life and for that victim’s family,” Gulluni said.

Gulluni called this “incredibly honorable” work and added that he believes the HPD serves the city well under the leadership of Police Chief David Pratt and Garcia. He added that having a quality Police Department in Holyoke was needed to have success in public safety.

Also joining the mayor and district attorney was Pratt, who said his department would be working tirelessly to deal with the gun violence in the city. He added he was thankful that the mayor was in support of the ShotSpotter system coming to the city.

“It’s going to only increase our ability to do that work and help with investigations after,” Pratt said. “These types of crimes have no business here in the city of Holyoke and we are going to do everything we can to stop that.”

Gulluni closed his remarks talking about the technology that will be considered by Holyoke officials called ShotSpotter. The company uses acoustic sensors that are strategically placed in an array of approximately 20 sensors per square mile.

During a Sept. 1 public meeting Councilor Jose Maldonado Velez compared Holyoke police to a “gang,” which has received backlash from the district attorney himself and the Police Department. The council was debating acceptance of a federal grant to fund the ShotSpotter program and Maldonado Velez argued it would lead to increased policing in communities of color. The discussion was tabled for a future vote.

The district attorney said Springfield has used this technology for 15 years and responded to comments made by Maldonado Velez about the program.

“[ShotSpotter has] never been characterized by anybody as a tool of inequality, as something that unfairly polices black and brown communities,” Gulluni said. “Quite the contrary, it’s a tool the police use to solve gun crimes, to respond more quickly to victims of gun violence. It’s a tool used to suppress gun violence in our most vulnerable neighborhoods. Anything else is again inconsistent with the evidence. It’s irresponsible, it’s unreasonable.”

A later press conference was hosted by HPD and their unions on Sept. 13 to respond to comments made by Maldonado Velez. In his opening statement Holyoke Police Capt. and President of IBPO Local #409 (the department’s Supervisors Union) Matthew Moriarty called the comments from Maldonado Velez “derogatory” and that the members of HPD strive for unity and the protection of all citizens of Holyoke.

“The comments are concerning, erroneous, harmful but most importantly divisive. The members of our department are a melting pot of color, race and creed,” said Moriarty. “Let me be clear, our officers are not gang members, they are fathers, mothers, sons and daughters. Numerous Holyoke officers are coaches, mentors and volunteer throughout the city on all levels.”

Moriarty continued saying over the past two months the city has suffered a dramatic rise in violent crime and that the HPD has responded fully. He added the five murder cases this summer now all have a suspect arrested and awaiting trial.

“Maldonado’s comments are not typical of our elected officials, and he may have chosen his words carelessly. Our department is always open for intelligent discussions and second chances,” Moriarty said. “I am requesting a public apology for his disparaging words or for Maldonado to abstain from all city votes pertaining to the Holyoke Police Department. The HPD has historically worked with our elected officials, as they have worked with us, not against us.”