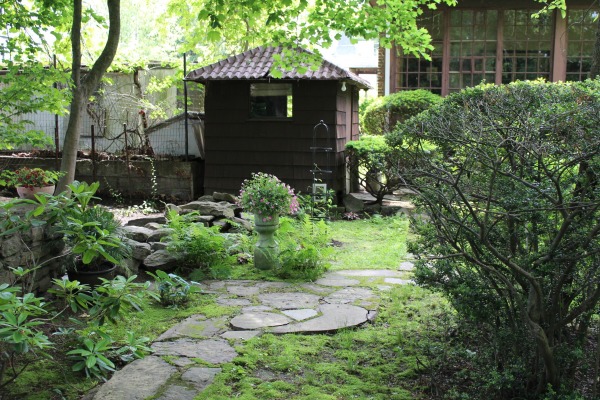 The Holyoke Preservation Trust will host a tour of eight gardens across the city on June 19.
Reminder Publishing photo by Danielle Eaton

HOLYOKE –  Residents will have the opportunity to explore a handful of private gardens in the community during an upcoming garden tour hosted by the Holyoke Preservation Fund.

Board member Meagan Magrath-Smith said the inspiration for the event came from the annual garden tour in Northampton that has taken place for decades. She said while she was out running in 2020 she began to notice the variety of gardens around the city.

“Northampton’s been doing this for a really long time, close to 26 years. I’m a runner and often run around the Highlands in Holyoke. You can just see if you’re peeking through someone’s side yard,” she said. “People have these awesome gardens. I had the sense that people have some amazing gardens in the city that no one had highlighted.”

Magrath-Smith said while the planning for the event initially began in the spring of 2020, after the pandemic had impacted the area, it was put on hold. “We thought it’s not the right year. Northampton canceled theirs, we just thought it wasn’t the right year,” she said.

However, as the commonwealth began to reopen and loosen restrictions surrounding the pandemic, she said the group revisited the idea. “We thought it’d be really nice to have a nice outdoor event to reconnect with the world and the community. It’s a really intimate thing to invite people into your backyard, there’s something really nice about that after the year we’ve had,” she said. “There’s been a lack of community events and ways to communicate and be close to their neighbors. We’re excited to be able to pull together the group of gardens we have.”

She said they were able to connect with gardeners through a Facebook page called Gardeners of Holyoke. Magrath-Smith called the page “one of the most lovely, positive spots on the internet, which is not always kind.”

“People just post pictures of their gardens across the city and ask questions. Looking back on it, that was probably one of the things that got me thinking about the garden tour. There’s clearly a love and appreciation, there’s such a homeowner pride like this is my little spot on Earth,” she said.

Magrath-Smith said there were a variety of gardens across the city and included on the tour from an Oriental garden to a very fruitful vegetable garden. “Some are really productive, one garden puts out 700 pounds of food, they have their own honey, they’re growing their own grapes for wine,” she said. “It’s a labor of love. They put their blood, sweat and tears into this. It’s an achievement for people to share it.”

She said after reaching out to people on the Facebook group, news of the event spread by word of mouth and they were able to line up garden hosts for both this year and next year. She said she was excited for people to see the variety of gardens the city has to offer. “I think people who come on the tour are going to enjoy the gardens they’re seeing and having access to gardens they wouldn’t see otherwise,” she said. “I think people will be surprised. You would have no idea this amazing garden is behind this house I drive by every day.”

Tickets are being sold for $15 ahead of the June 19 event, but can also be bought for $20 the day of the event. The tour will take place from 10 a.m. to 3 p.m. and will feature eight gardens across the city. Magrath-Smith said those purchasing tickets or who buy tickets ahead of time will be required to pick up both a wristband and physical map at Gateway City Arts on 92 Race St. the day of the event. Should there be inclement weather, she said a rain date was scheduled for the following Saturday on June 26.

Proceeds from the event, she explained, will continue to allow the trust to “support tours in the city.” She said the group had hosted a number of tours in the recent years including canal tours. Additionally, the funds support projects the trust is actively involved in and allow them to fund their recently established Historic Preservation Award.

Due to restrictions around the pandemic being eased, she said masks will not be required due to the updated state guidance. “I think we’re just saying if you cannot socially distance it makes sense to wear a mask,” she said.