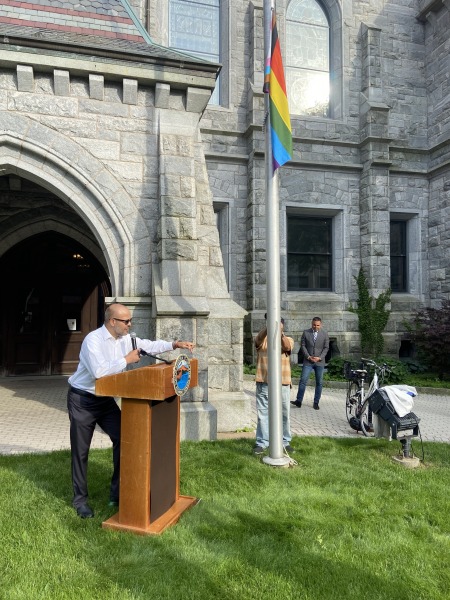 HOLYOKE – To honor Pride month for the LGBTQ+ community in Holyoke, city officials gathered with the public outside of City Hall on June 6 for a Pride flag raising ceremony.

Joining the festivities were members of the City Council, Mayor Joshua Garcia, state Rep. Patricia Duffy, state Sen. John Velis and residents of Holyoke. Ward 6 City Councilor Juan Anderson-Burgos spoke to the crowd on the importance of Pride month and celebrating those who identify.

“Events like this are important because visibility matters. It matters because while many of us can feel safe to be who we are openly, symbols like this flag need to be seen as a light shining into the dark places where too many still have to live in fear,” said Anderson-Burgos.

Following his comments, House of Colors Youth Leader Tora Mateo gave opening remarks on the ceremony and the importance of Pride Month. House of Colors is a youth directed resource center for LGBTQ youth and their allies that fosters a safe and welcoming environment by promoting community and offering resources that meet the needs of its members.

Mateo spoke about feelings of loneliness and not belonging within their community and his relationship with television and movies. Through the different mediums, Mateo said they began relating to LGBTQ characters and stories as they portrayed a realistic experience of struggling with identity that Mateo related to.

Mateo said the friends and community they met through House of Colors has made them realize who they are as a person, and they are thankful for the support they have gained from the community.

“The world is a very difficult place to live in, but it doesn’t mean its impossible. I know firsthand it’s possible to find who you are,” Mateo said.

Next to speak was Garcia, who read a proclamation to the crowd and spoke to how glad he was to be a part of the celebration. Garcia called Pride Month a time of celebration but also a time for sober reflection.

“We celebrate how far we’ve come, the rights we’ve secured and the dignity that was long denied,” Garcia said. “And we also remember with aching hearts, what it took to get where we are today. Let us always remember that Pride Month is about love. The freedom to love who you love and to be loved in return.”

Garcia then read a city proclamation acknowledging the month as Pride Month, 10 years after the first LGBTQ celebration in the city.

Following the mayor was the raising of the flag and keynote speaker of the event Chloe Soto, an artist, organizer and curator of local events who is a transgender woman. Soto opened her comments saying she had doubts about speaking at the event due to the history between trans people and the LGBTQ community that has been “shaded in transphobia.”

She added that she needed to be there as evolution of the communities has brought them closer together than ever before. Soto said that she felt somewhere in her personal journey she gained a form of privilege that is only visible to those within the LGBTQ community.

“In cis spaces, it doesn’t matter how many degrees I have, how well read I am or how eloquent I speak. What they see first is my transness, and yet here I stand before you, honored to be able to speak to you today,” Soto said. “I’m an educated trans Afro-Latina woman standing fully and completely in my truth, whether they like it or not.”

Soto continued her speech expressing that while there has been great improvements in treatment to the gay community, attacks on trans people have only seemingly increased and been politicized in recent years. Soto added she faces transphobia often in her life and it was most hurtful when coming from the LGB community.

“I say this not to further divide, but to name it so that we know that trans exclusion has happened within the movement and to find a place of healing. It is crucial that trans people don’t get left behind,” Soto said.

Soto in closing reminded those in attendance that the trans population makes up less than 1 percent of the population yet there is constant discussion regarding the group and their rights.

“There’s still a long way to go and we can get there together. united, right? All voices together.” Soto said.

For closing remarks, At-Large City Councilor Jose Maldonado Velez spoke to the crowd and said it was important for the community to keep sharing their stories. He added that too often there are people trying to tear down the community but that events like this were great moments to keep sharing experiences and not being afraid to do so.