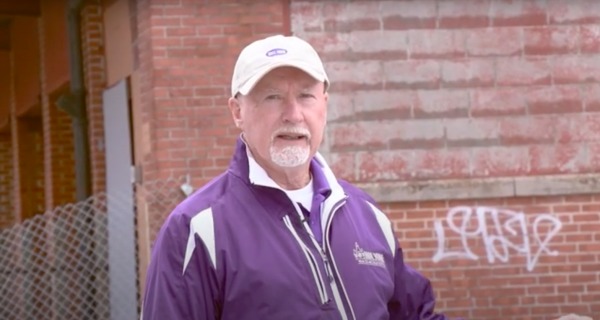 Holyoke City Councilor Mike Sullivan announced his campaign for mayor of the city in a YouTube video on April 20.
Photo credit: YouTube

Sullivan is the third candidate to officially announce his intent to seek the city’s highest office with Councilor Rebecca Lisi and School Committee member Devin Sheehan announcing their campaigns at the beginning of the year.

His announcement came on April 20 in the form of a YouTube video where Sullivan visited several locations in Holyoke while explaining his platform and intentions. Sullivan began the almost four-minute long video with various shots of the city, including the Holyoke Water Power Company hydroelectric facilities.

The idea of environmentally friendly city practices such as these, Sullivan stated, was what would attract new businesses and industries to Holyoke. As he stood in front of the Holyoke Dam, he said it was “the future of Holyoke.”

Green energy and the use of hydroelectricity, he said, was something the city could “capitalize on and build on to attract businesses, bring new industries to Holyoke, [and] create new jobs.” He said, “As mayor, these are the avenues I would pursue.”

He went on to say he wanted to create “2,500 new jobs in Holyoke.”     As the camera panned to Sullivan standing in front of a vacant building, he said such buildings were “an impediment” to such growth in the city. “They have to go,” he said.

Standing in front of an old paper mill that has since been rehabilitated resulting in “millions of dollars invested in the city” Sullivan called this the future of Holyoke. “This is the future now bringing new jobs, new economic opportunity to the city of Holyoke,” he said.

He then went on to state that as such companies came into the city, he would not allow them to buy political influence within the city. “They’ll be investing millions, but they’ll also seek to use that money to gain political influence. I will not let that happen,” he said. “Myself, my campaign, I will not take contributions from any of these industries to keep my focus clear on the benefit of the city of Holyoke and the citizens of Holyoke, and not the financial gains of the out of town investors that come with these businesses.”

Sullivan said his campaign would focus “exclusively” on the city of Holyoke, their “rebirth” and their “rebuilding.” He said, “Rebuilding our infrastructure, reinvesting in our school system, creating good jobs at good wages, rebuilding our downtown as a vibrant urban center and reinvesting in the things that allow all of us to feel safe.”

He then addressed previous leadership within the city and said he felt as though “over the last decade our city’s leadership has focused on personal political ambition and issues that did little to help Holyoke.”

“I am running because Holyoke needs leadership that is focused exclusively on Holyoke, leadership that is on the job seven days a week fighting to rebuild our infrastructure, attracting private investment, creating good paying jobs, creating a tax base to support the education of our children and keeping our city safe,” he said.

He said while he wasn’t a “typical” politician, he would “work tirelessly in this campaign” to earn the support and trust of Holyoke voters. The full campaign announcement can be viewed at https://www.youtube.com/watch?v=LY8pXnbi5lQ.XX