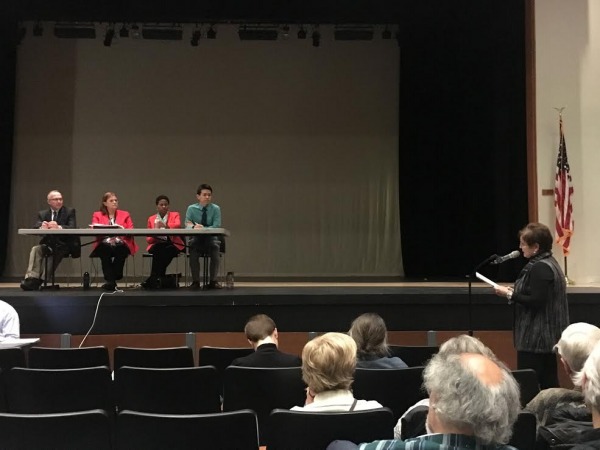 LONGMEADOW – Longmeadow citizens were given the opportunity to voice their opinions on the plans by Tennessee Gas Pipeline to expand its natural gas infrastructure in the region. The Longmeadow High School’s Auditorium was host to the Mar. 27 Public Hearing, and was filled with a considerable number of residents, forty of which voiced their opinions to the panel.

Tennessee Gas’ plan is known as the “261 Upgrade Project.” The facilities that Tennessee Gas is hoping to construct in the area is a metering station at the Longmeadow Country Club and new pipelines and an upgraded compressor in Agawam. This project would install 2.1 miles of new, 12-inch diameter pipeline looped primarily within the right of way of its already existing natural gas pipeline in Agawam. This would allow additional natural gas delivery capability to Tennessee gas customers – including Colombia Gas. Tennessee also proposes to install a device called a Pig Launcher; this device cleans and internally inspects the pipeline. Additionally, Tennessee also proposes to widen its easement by about 20 feet. By doing so, they would acquire approximately five and a half acres of land along its existing pipeline right of way.

The Longmeadow metering station, would provide a new delivery point to serve Colombia Gas. Tennessee Gas filed an application for certificate of public convenience and necessity for the 261 Upgrade Project with the Federal Energy Regulatory Commission (FERC) on October 19, 2018. These facilities would help Columbia gas to expand their services to the Pioneer Valley. This expansion plan is known as the “Greater Springfield Reliability Project”. Tennessee Gas and Colombia Gas are working together closely in hopes to get approval on these two projects.

Evans shared with attendees of the meeting that the Citing Board does not have a direct say in if the project comes to function because it is out of their jurisdiction.

“As an intervener in the FERC proceeding, the Citing Board’s responsibility is to represent the interests of the Commonwealth and its residents and ensure that the Commonwealth has a reliable supply of energy, with a minimal impact on the environment, at the lowest possible cost,” said Evans.

In the last year, a group was formed within the town called, “Longmeadow Pipeline Awareness Group”. The committee, chaired by Michele Marantz, has dedicated their time to spreading awareness about the 261 Upgrade Project and The Reliability Project. They feel as if not enough information is being shared with not only their town, but surrounding towns as well, on these two projects. The group is additionally concerned with ensuring that residents have an understanding of the health risks these projects could append on the town. Many members from the group were not only in attendance at the meeting, but also spoke to the panel.

Marantz started her speech by saying, “This is what democracy looks like!” She continued on by explaining that although the committee is diverse, they all share one common concern and that is to determine why a gas metering station needs to be built in a residential neighborhood and the impact that such a facility would have an all aspects of the Longmeadow community.

“For over a year we have talked with legislators, town officials and residents from other Western Mass communities targeted by gas expansion plans. We’ve also met with scientists to learn what this plan would mean for our wellbeing, the future of Longmeadow and the future of our planet. Tonight, you are hearing from members who are talking about what we’ve discovered and the conclusions that we’ve drawn from these efforts,” said Marantz.

Marantz continued, further explaining why she does not approve of the expansion proposal. She stated that this project would promote fossil fuel production at a time when the state’s Global Warming Solutions Act mandates that communities reduce emissions dramatically. She stressed her concerns with Longmeadow and Agawam being certified Green Communities and how projects like these would hinder their goal of reducing fossil fuel admission by 20 percent in the next five years.

“If any infrastructure work is to be done, we need gas companies to repair leaking pipes, we don’t need a meter station that will trigger new pipelines, as this one will,” Marantz commented.

Marantz finished her speech with stating that her last reason for rejecting the project has to do with Article 97 of the Massachusetts Constitution which states, “The people shall have the right to clean air and water, freedom from excessive and unnecessary noise, and the natural, scenic, historic, and esthetic qualities of their environment.” Marantz continued by saying the 261 Upgrade Project and the Reliability Project will jeopardize the constitution.

“As long as we’re discussing democracy, how is it that the Longmeadow Country Club and Tennessee Gas Company can engage in a private sale that results in profits for them while imposing ongoing risks and expenses on our town?” Marantz questioned.

Michael Clark spoke on behalf of state Sen. Eric Lesser who could not be in attendance.

“In the wake of the Merrimack Valley Explosions that occurred last year, local area residents are rightly concerned about the safety and climate impacts caused by existing and proposed expansions of Natural Gas infrastructure,” Clark began.

Clark continued to explain that according to Tennessee Gas, the new Longmeadow station would provide a needed delivery point for Colombia Gas on the East side of the Connecticut River. Clark added that over the past several months however, Sen. Lesser has responded to many constituents who have contacted his office in opposition to the proposed Longmeadow station.

“Specifically, construction of the metering station has raised both air quality and climate concerns due to the admissions of air pollutants,” Clark said.

Longmeadow residents were not the only people in attendance, voicing their concerns. Residents from Northampton, West Springfield, Springfield and other towns were also there.

Many of the same concerns were voiced by multiple townspeople. Residents shared they are frustrated with the lack of information that has been revealed to the public about these projects. They are concerned about negative health affects by potentially breathing in pollutants. Multiple residents raised the question of why is a metering station needed and as a Green Community why is Longmeadow being considered for this project? The biggest concern from almost every resident who spoke was that in the assessments filed by Tennessee Gas, they describe the proposed area for these projects as, “non- residential.” The metering station will be located less than a mile from Wolf Swamp Elementary School, which is surrounded by neighborhoods and houses.

“Our home is for residential, not gas distribution,” multiple residents echoed.

A decision about either of these projects was not made at the conclusion of this Public Hearing.